A knee on the ground in support of Black Lives Matter, the NBA has resumed in the Orlando health bubble 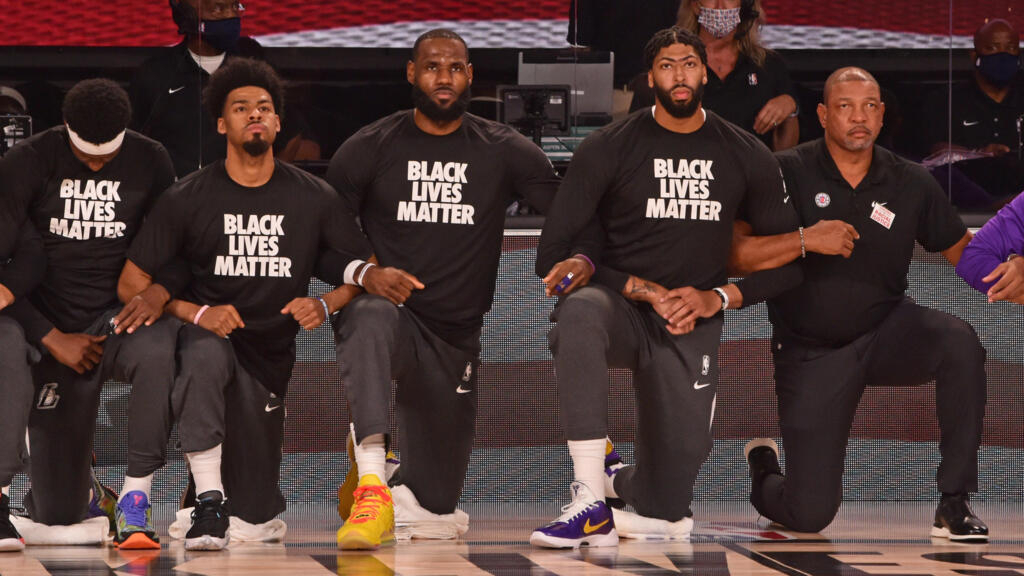 NBA players, coaches and referees dropped to one knee during the American anthem to protest racial injustices, on the sidelines of the resumption of the NBA in the health bubble of Disney World in Florida where the rest of the world takes place. American basketball championship.

The image is strong. Displaying a united face, all the actors of the NBA posed in unison one knee on the ground during the American anthem Thursday, July 30 during the resumption of the North American Basketball League.

As they had made the commitment, the basketball players decided to take advantage of their return to the floors, inside the Disney World health bubble in Florida, to show their support for the “Black Lives Matter” movement in the wake of George Floyd’s death, asphyxiated during his arrest on May 25 in Minneapolis.

>> To read also: NBA players in “their bubble” at Mickey’s before the resumption of the season

In recent days, the players of the 22 teams qualified for this highly anticipated resumption of the championship, interrupted for more than four months because of the coronavirus, have come together to act in unison. In the evening, the Los Angeles derby between the Lakers of LeBron James and the Clippers of Kawhi Leonard was thus preceded by the same strong gestures.

“A unique moment in our history”

On the floor of the HP Field House, one of the three halls of the huge ESPN World Wide of Sports complex where the matches will take place behind closed doors until mid-October, the main actors of this Jazz-Pelicans have all gathered on along the sideline. They wore the same black sweatshirt with “Black Lives Matter” written on it, words also painted on the floor above the NBA logo.

Acknowledging “a unique moment in our history” on CNN earlier Thursday, NBA boss Adam Silver ruled that no penalty would be imposed for the kneeling.

“I respect the unified act of peaceful protest by our teams for social justice and in these unique circumstances I will not apply our old rule requiring us to stand up during our national anthem,” he said. in a statement just after the start of the match.

Messages on the jerseys

After kneeling, hands on the shoulders of their neighbors, the players started the game and each replaced, as the league has authorized, their name with a message on their jersey.

Young New Orleans star Zion Richardson chose the word “Peace”, Utah full-back Mike Conley chose “I’m a Man” and Rudy Gobert for “Equality”. As a symbol, the French pivot scored the very first basket of the match, 141 days after the announcement of his positive test for Covid-19 which resulted in the suspension of the season.

And he also scored the last two points, two free throws that offered a narrow victory for the Jazz (106-104) at the expense of the Pelicans, now 11e in the West and whose quest for the 8e place, qualifying for the play-offs, is complicated.

A gesture that has become a symbol

Over the past two months, the United States has witnessed numerous protests against racial injustice and police brutality following Floyd’s death. Since then, kneeling on the ground has become a symbol of protest adopted by demonstrators, including many professional athletes.

This gesture was made for the first time by former American football player Colin Kaepernick in 2016, who collected insults from Donald Trump for it and was blacklisted in the NFL.

Despite Brooklyn star Kyrie Irving’s call to boycott the revival to better devote himself to the fight against social injustice, almost all of the players decided to go to Orlando where their speeches on this theme are daily. .

LeBron James has called for justice for Breonna Taylor, a black woman killed by police in her apartment in March, and called for “the officers who committed this crime to be arrested.”

The Lakers, the superstar’s team, advance among the favorites for the title race, along with the Clippers of Kawhi Leonard and the Bucks of Giannis Antetkounmpo.