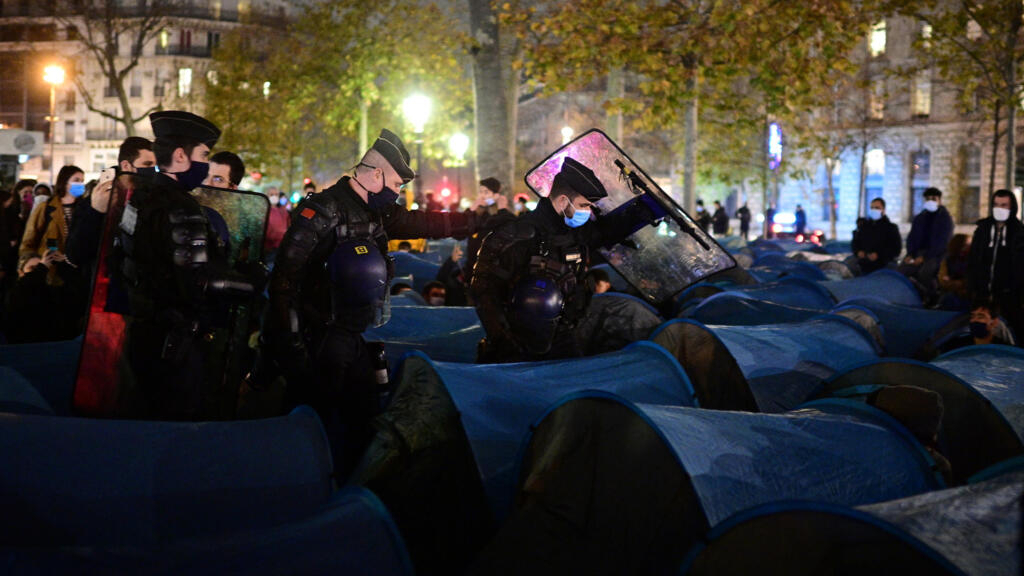 The police evacuated with tear gas an encampment of a few hundred migrants who had set up their tents in the center of the French capital on Monday. While NGOs and elected officials protested strongly, the Minister of the Interior Gerald Darmanin referred to “shocking” images and demanded a report on the events of the evening.

Several hundred migrants, wandering from theevacuation of a large exile camp last week, set up Monday, November 23 a new camp in the center of Paris, that the police forcefully dismantled in the evening by using in particular tear gas.

“We’re here to show that we have nowhere to go. We don’t want to live like animals, we just came to seek asylum,” laments Murtaza, a 20-year-old Afghan.

In less than two minutes, around 500 blue tents were deployed under the statue of the Republic, quickly taken over by hundreds of exiles, the overwhelming majority from Afghanistan.

“We are afraid that they will be evacuated without a solution, as what happened last Tuesday” in Saint-Denis (Seine-Saint-Denis), during the dismantling of a large informal camp that had been set up since ‘summer near the Stade de France, explained Maël de Marcellus, Parisian manager of the Utopia56 association. “They have been left behind and invisible, but they too need accommodation, especially in the midst of a health crisis,” he added.

Barely an hour after the installation, the police began to remove part of the tents, sometimes with exiles still inside, under the cries and hoots of activists and migrants.

Shahbuddin, 34-year-old Afghan, puts a gray beanie back on his head and sobs after being taken out of his tent: “It’s too violent, we just want a roof”.

And it was finally under the fire of tear gas and de-encircling grenades that a few hundred exiles and their supporters were finally dispersed by the police in the streets of the hypercentre of Paris.

“The State gives itself a lamentable spectacle” by bringing “a police response to a social situation”, commented to AFP Ian Brossat, deputy of the mayor of Paris in particular in charge of the reception of refugees .

Later that night, the Minister of the Interior Gerald Darmanin evoked, on Twitter, “shocking” images. “I have just requested a detailed report on the reality of the facts from the Prefect of Police by midday tomorrow. I will make decisions as soon as it is received,” he added.

Some images of the dispersal of the illegal migrant camp on Place de la République are shocking. I have just requested a detailed report on the reality of the facts from the Prefect of Police by midday tomorrow. I will make decisions upon receipt.

“The constitution of such camps, organized by certain associations, is not acceptable. The Prefecture of Police therefore proceeded immediately to the dispersal of this illegal occupation of public space”, indicated in a joint statement the Prefecture of Police and that of the Île-de-France region (Prif), which manages shelter operations. “All people in need of accommodation are invited to come to the day centers where guidance towards accommodation solutions adapted to their situation is offered very regularly to migrants”, they added.

“We do not respond to misery by the baton. The shelter of the migrants of the camp of Saint-Denis remained in the street is urgent, essential, indisputable. It is in the honor of the French Republic”, reacted Delphine Rouilleault, general manager of France Terre d’Asile, association and State operator on the management of camps.

“The only response from the authorities is force. And force, in times of health crisis, this is not acceptable,” adds Corinne Torre, head of Doctors Without Borders in France, also claiming accommodation.

More than 3,000 people, mainly Afghan men, had received shelter in reception centers or gymnasiums in Ile-de-France last Tuesday. But between 500 and 1,000 people had since been wandering the streets on the outskirts of Paris, according to associations that come to their aid and which denounce in particular police abuse.

The police, they apply the principle of “zero tolerance” for migrant camps in the capital, instituted by the Paris police chief Didier Lallement at the beginning of the year.

Since then, many have retreated towards Seine-Saint-Denis. But on the outskirts of Paris, “invisibilization” leads to a “manhunt”, explains Louis Barda, head of marauding at Médecins du monde. According to his reports, the violence suffered by the exiles already pushes them to leave Paris to reach Calais.