a thousand demonstrators demand the regularization of undocumented migrants 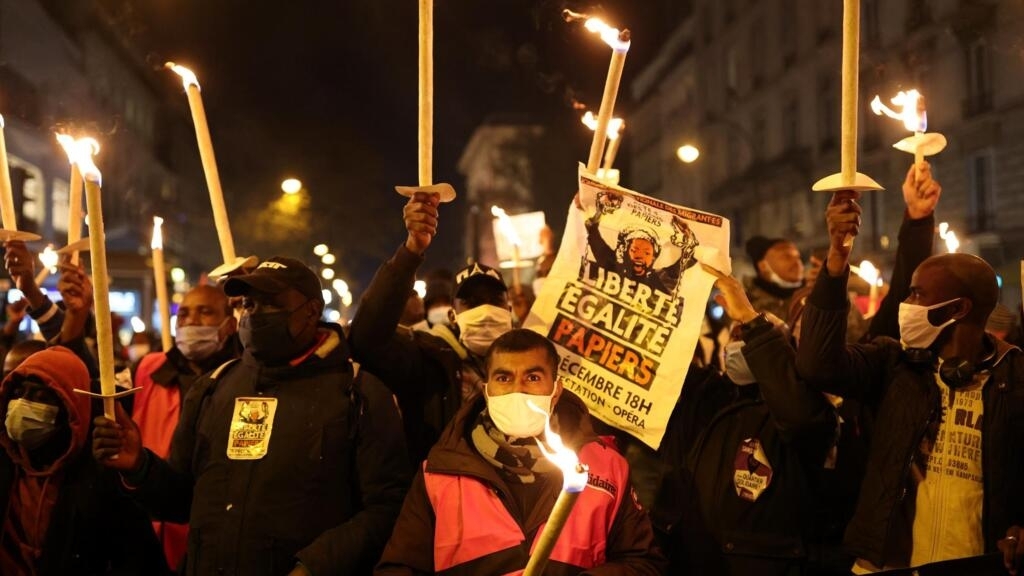 More than a thousand people demonstrated on Friday alongside undocumented migrants in Paris and across France to once again demand their regularization, on International Migrants Day. The opportunity to denounce their situation in the midst of a health crisis.

“During the Covid, we are the ones doing all the work.” On the occasion of International Migrants Day, undocumented migrants demonstrated on Friday, December 18, across France to again demand their regularization. This new Solidarity March also highlighted their fragility during this health crisis.

After those of May, June and October, which had brought together thousands of people, this fourth day of mobilization took place in around fifty cities, including Bordeaux, Marseille and Strasbourg.

In Paris, more than a thousand undocumented, mainly from Africa, demonstrated peacefully between 6.30 p.m. and 8 p.m. in the center of the capital, supervised by a very large police force, noted an AFP journalist.

“Undocumented migrants in danger”, “The national effort is us” proclaimed their banners in particular, lit by torches lit in memory of the migrants who died in exile.

Not far from there, Kanouté explains that he has two jobs: one at the dive in a restaurant in the 8th arrondissement, in the dark, and the other as an UberEats delivery man, by bike. He performs the latter with the identity of someone else.

“I am given an account and I drive all night and at the end the guy gives me a few euros. During the confinement, we did not stop,” explains the 25-year-old Malian. “Without papers, we cannot really start our life” in France.

“As we have no papers, the bosses take advantage of us and when they want, they do not pay us”, explains another Malian, Lassana, 50, who has been living clandestinely in France for 19 years and works in the building industry. “a week here, a day there, sometimes just for 40 euros”. “We’ve been here for a long time, but our life is blocked.”

The Paris police headquarters had banned the last part of the parade, which provided for the arrival of the procession in front of the town hall. This for fear of disturbances in these very crowded commercial districts on the eve of the Christmas holidays. All the more so at the time of the curfew introduced from 8 p.m.

The organizers initially suggested that a new camp could still be set up in front of the Town Hall at the end of the event. That three weeks later the violent dismantling by the police of migrant tents installed on the Place de la République, which had aroused great emotion.

They finally changed their minds in the face of the massive police force deployed there, calling for dispersal “so as not to put people in danger”.

“The indignation born on the Place de la République, what is the result? The migrants are still in the street. The indignation is good, we what we want are acts”, denounced Denis Godard, one of the organizers of this “Solidarity March” called for by more than 200 collectives.

The sans-papiers hope that this “Act IV” will listen more attentively than during the demonstrations in October, organized the day after the assassination of Samuel Paty by a refugee of Chechen origin converted to jihadist theses.

“The feeling of injustice is such for these people, who are in essential professions, that this denial of rights is unbearable”, underlined Fernanda Marrucchelli, of the Federation of associations of solidarity with all immigrants (Fasti).

Naturalizations made easier for those on the front line

In recent months, the file has not remained at a standstill: the government gave instructions to the prefects in mid-September to facilitate French naturalization foreign nationals mobilized on the front line during the epidemic.

In early November, the entourage of the Minister for Citizenship Marlène Schiappa announced that a first series of 334 naturalizations was underway.

A drop of water, immediately judged the associations who believe that naturalizations, reserved by definition for foreigners in a legal situation, are only a tiny part of the equation.