all pro-democracy deputies will resign 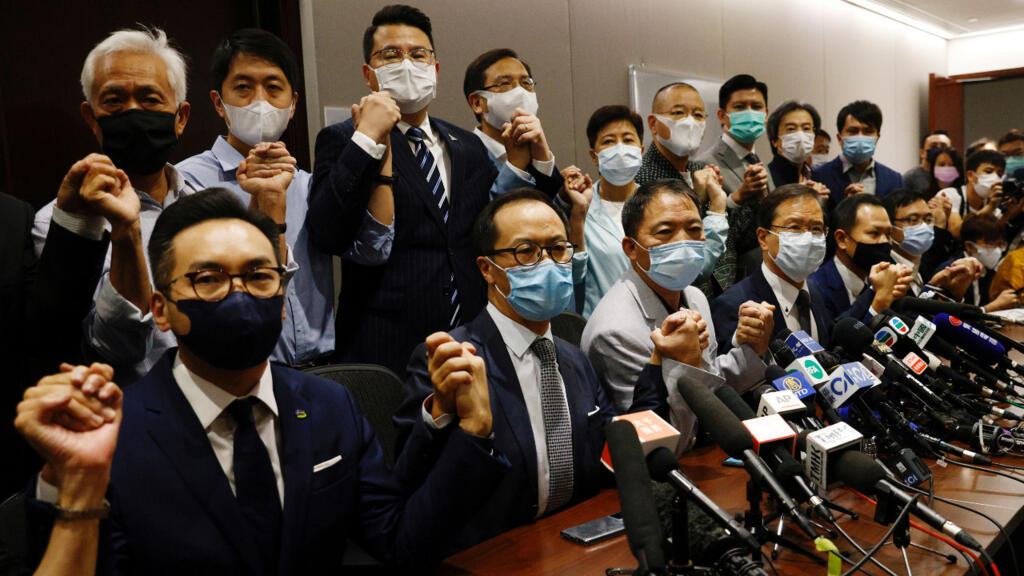 “We will resign en masse.” All Hong Kong pro-democracy deputies announced their next resignation on Wednesday after the ouster of four of them, under a measure adopted by the Chinese government which allows local authorities to dismiss elected officials considered to be a threat to national security.

All the pro-democracy deputies of Hong Kong announced Wednesday, November 11, their next resignation after the ouster of four of them under a measure adopted by China, which would almost entirely leave the parliament in the hands of parliamentarians aligned with Beijing.

These resignations are the latest blow to the pro-democracy camp that is under constant attack since the Chinese government imposed the law on national security at the end of June. Many activists have since been arrested while others have chosen exile.

“We (members) of the pro-democracy camp will stand alongside our colleagues who are excluded. We will resign en masse,” said Wu Chi-wai, head of the fifteen pro-democracy lawmakers remaining in the local parliament. .

Four pro-democracy Hong Kong MPs were removed from their terms on Wednesday morning after local authorities were allowed by one of China’s major legislative committees to dismiss any lawmaker deemed to pose a threat to national security without even going before a court.

This decision comes two days after the threat brandished by twenty or so pro-democracy opposition lawmakers to resign “en masse” in the event of the exclusion of their colleagues.

The Legislative Council (LegCo, the local parliament) has 70 members appointed according to a convoluted system that almost certainly guarantees a majority for the pro-Beijing bloc.

Only 35 are in fact elected by direct universal suffrage, offering a rare opportunity for 7.5 million inhabitants to express their opinion through the ballot box. The other legislators are mainly appointed by socio-professional groups acquired in mainland China.

A “mass” resignation would leave LegCo almost entirely in the hands of Beijing-aligned MPs. “If the respect for procedures, the protection of systems and functions and the struggle for democracy and human rights resulted in exclusion, it would be an honor for me,” Dennis Kwok told reporters on Wednesday. one of the four excluded deputies.

For her part, the head of the Hong Kong executive, Carrie Lam, argued that these exclusions were “constitutional, lawful, reasonable and necessary”.

The four elected representatives were among the 12 candidates for the Hong Kong legislative elections invalidated at the end of July.

These elections, which were to take place on September 6, were finally postponed for a year due to coronavirus.

The exclusion of these four deputies is the latest blow to the pro-democracy camp, which has been the subject of sustained attacks since Beijing imposed the national security law at the end of June, described by Chinese leaders as “a sword” hanging over the heads of his detractors.

This legislation, intended to put an end to months of monster demonstrations and often violent, which shook the territory last year, helped to considerably strengthen the grip of the Chinese central power over Hong Kong.

Many activists for democracy denounce a liberticidal text.

The impossibility for the Hong Kongers to elect their leaders, as well as all their deputies was at the heart of their protest movement.

More than 10,000 people have been arrested since the protests began and the courts are overwhelmed with the number of cases to be tried, most of them involving opposition MPs and figures from the pro-democracy movement.

Critics of the National Security Law, which was passed bypassing LegCo, deals a fatal blow to the principle of “One country, two systems”, which was supposed to guarantee until 2047 freedoms unknown in mainland China .