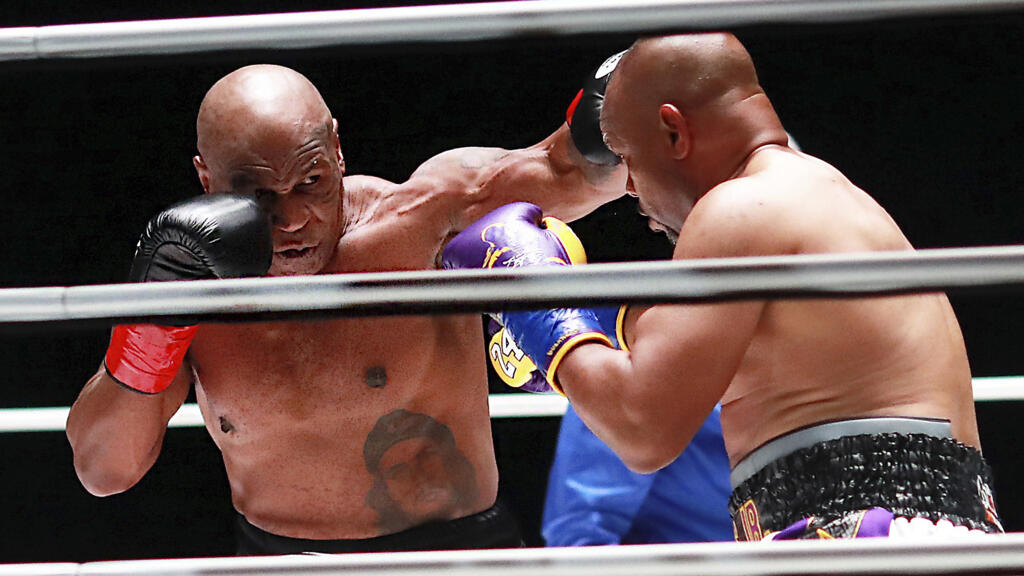 Mike Tyson made his return to the ring at 54 on Saturday despite a draw against Roy Jones Jr, 51, during an evening punctuated by rapper Snoop Dogg. “Iron Mike” also mentioned a possible fight in the South of France.

“Iron Mike” hasn’t said his last word. At 54, boxing icon Mike Tyson took over the gloves on Saturday, November 28, for a match at the Staples Center in Los Angeles against fellow retired legend Roy Jones Jr, 51. Expected by the nostalgic and the amateurs, it ended in a draw at the end of the eight rounds of two minutes.

At the time of the decision’s announcement, Tyson appeared to be much cooler than Jones Jr., still sweating and worn out from the “ravaging body hits,” he said.

“You took it well, because I sent it to you. I respect that,” replied “Iron Mike”, who thought he had won, but was happy with the result. “The draw is fine with me”, he assured, urging him to “put it back”.

Dressed in flowing black shorts as in his heyday, Tyson was, as expected, the most aggressive, starting each round with a bang and advancing incessantly towards Jones Jr, more mobile, who was able to respond backwards with the tips of his gloves in the colors of the Lakers, flocked with the numbers 8 and 24 in tribute to Kobe Bryant, who died in late January in a helicopter crash.

Enough to inspire yet another punchline to Snoop Dogg, who had just performed a medley of his greatest hits, curls of cannabis cigarettes as a bonus. “Looks like two of my uncles fighting for the barbecue,” exclaimed the rapper, winner by knockout to comments against consultant Sugar Ray Leonard, hardly inspired.

Despite the “exhibition” framework set by the California Athletic Commission (CSAC) to preserve their physical integrity, the two boxers, prepared for several months and subjected to anti-doping tests, have, as promised, delivered a “real fight”.

Evidenced by this jab [coup] sent full face by Jones Jr at 2e round, Tyson’s two big left-right hooks on the body and temple at 5e, these blows also that he released after the gong of 3e, apologizing immediately by taking “tenderly” the head of his victim on his shoulder.

Neither lacked panache, and Tyson can be proud of his pathetic exit from 2005, when he lost his last professional fight to Irish stranger Kevin McBride.

“I’m really happy with those eight covers and even more to have gone the distance. I was afraid of hurting myself. Why doesn’t anyone care about that for me? I haven’t done this in fifteen years,” did he declare.

A fight in the South of France?

Coming out of his successful comeback against Roy Jones Jr, heavyweight legend Mike Tyson said he wanted to continue boxing next year, citing the possibility of a fight in the South of France. “My body is splendid, I’m going to make it fight a little more. I want to continue on this momentum. Maybe we will do something in the south of France – in Monaco or Saint-Tropez – with a European fighter” .

Many are speculating on the identity of his potential next opponent. If it could be the former world heavyweight champion Evander Holyfield, who beat him twice (in 1996 and in 1997), the last of which at the cost of ear bites that have been remembered and caused the disqualification of Tyson, the name of Lennox Lewis is another possibility.

He too was world heavyweight champion and he too beat Tyson in a title defense in 2002. British by nationality, he could join the project.

“Anything is possible – the sky is the limit. I believe we have broken all pay-per-view records for a night of boxing. I just want to keep doing this from a humanitarian point of view,” explained the star of the rings, whose return to 54 years, after fifteen years without boxing, is animated by the will to help the homeless and the drug addicts, by collecting money with this kind of fights exhibitions.