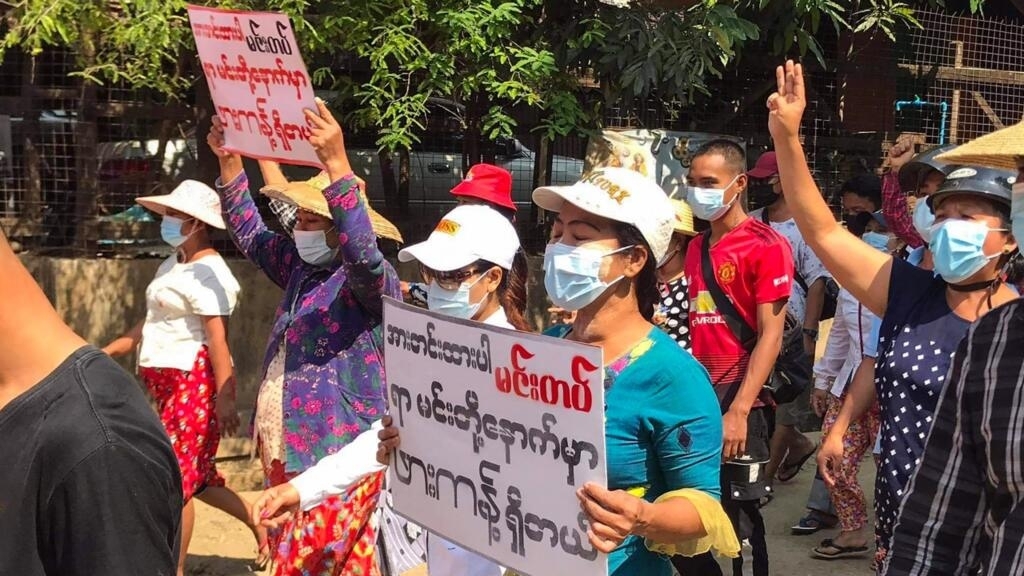 At least five opposition rebels have been killed in clashes in the town of Mindat, Burma, an anti-junta militia said on Sunday, while the UK and US condemned the violence in Burma. the army against civilians.

“At least five of our members have been killed and more than ten injured” in clashes, said Sunday (May 16th) a spokesperson for the Chinland Defense Force (CFD), an anti-junta militia in the town of Mindat. , in the north-west of Burma, which has become the focal point of unrest in the country. The UK and US embassies have condemned military violence against civilians.

The CDF spokesperson told AFP that five residents of Mindat were also arrested by the army. According to the latter, who does not wish to be identified, the militia fighters set fire to several army trucks and ambushed the troops who had come as reinforcements, while the soldiers had attacked the city with artillery.

On Sunday, the CDF withdrew into the jungle. “We only have homemade weapons. It was not enough,” he said, “but we will be back to attack soon.”

He added that residents who remained in Mindat, under martial law since Thursday, were afraid to leave their homes for fear of being targeted by the military.

The military junta, which seized power and detained elected leader Aung San Suu Kyi, imposed martial law on May 13 on Mindat, a town of more than 40,000 inhabitants located about 100 kilometers from the border. with India, and since then intensified attacks against those it calls “armed terrorists”.

Burmese forces fought local armed opponents in the town of Mindat on Saturday in an attempt to quell the rebellion against the military coup, according to Reuters.

“We are fleeing for our lives,” a resident of Mindat told Reuters. “There are around 20,000 people trapped in the city, most of them children and the elderly,” he added.

These clashes rank among the most violent since the February 1 military coup that plunged the country into chaos.

Burmese generals overthrew the elected government of Aung San Suu Kyi on February 1, triggering a large protest movement with daily events, strikes and acts of sabotage that the authorities sought to suppress by force.

Rebels have created local militias equipped with homemade weapons to protect their towns from security forces, who have killed at least 790 civilians, according to a local watch group.

With mobile data blocked across the country, information about the fighting is slow to come out, and verification on the ground is made more difficult as residents fear reprisals.

State newspaper New Light of Myanmar reported on Sunday that a military tribunal would be convened to try “perpetrators of terrorist attacks” in Mindat.

The embassies of the United States and the United Kingdom on Saturday called on the security forces to stop violence against the population in the city. “The army’s use of weapons of war against civilians, including this week in Mindat, is a further demonstration of the extremities to which the regime is prepared to stoop in order to stay in power,” denounced the US Embassy in a tweet.

The military’s use of weapons of war against civilians, including this week in Mindat, is a further demonstration of the depths the regime will sink to to hold onto power. We call on the military to cease violence against civilians.


The British embassy has ruled that the violence in Mindat “cannot be justified”. “Evidence of atrocities must be sent to the (United Nations Independent Investigation Mechanism for Burma) so that the perpetrators can be held accountable,” she tweeted.

We are aware of increasing violence in Mindat, including reports of the military shooting civilians. Attacks on civilians are illegal and cannot be justified. Evidence of atrocities should be sent to the @A IIMM so perpetrators can be held to account.https://t.co/cdsUd2Hkz3


The UN had already warned against possible crimes against humanity committed against the population.

fighting resumes in the south

in Africa, a controlled Covid-19 pandemic?