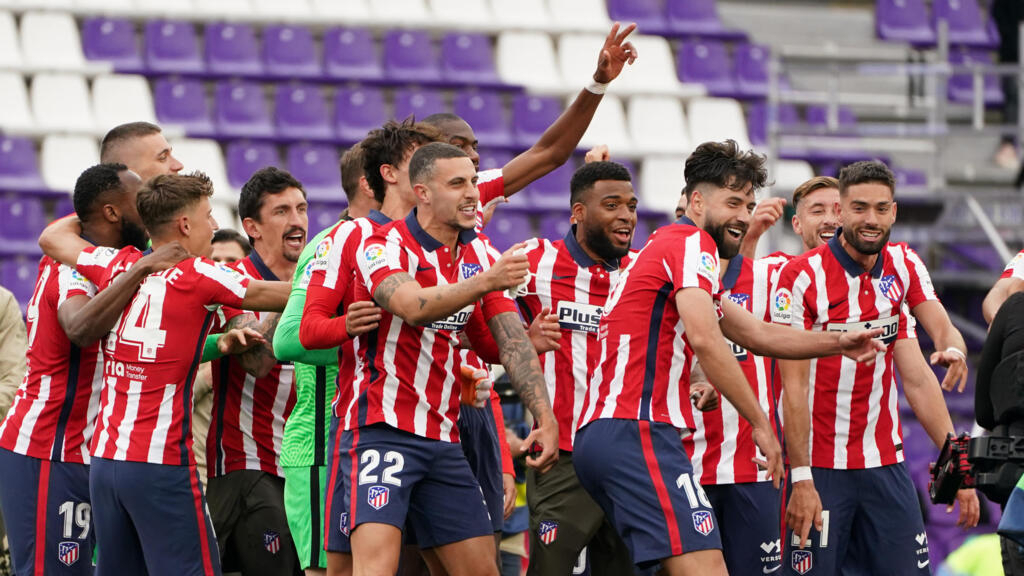 Atlético Madrid upset the established order and beat the behemoths Real Madrid and FC Barcelona to seize, on Saturday, the 11th Spanish league title in its history. A master stroke that elevates even more his coach Diego Simeone to the rank of living legend of the Madrid club.

Seven years later, the “Colchoneros” have redone the blow: the players of Atlético Madrid, who reigned in La Liga for a large part of the season, once again played the spoilsport to end up appropriating, Saturday, May 22, the Spanish crown thanks to their 2-1 victory in Valladolid, while the real Madrid won (2-1) at Villarreal.

On Saturday, the “White House” only believed in the space of a few seconds. Led 1-0 at the break like the “Atleti”, the men of Zinedine Zidane believed to equalize by a head of Karim Benzema (56th) … but while his goal was reviewed and canceled by the video referee, at the same time, Angel Correa equalized with a sharp point in Valladolid, before the winning goal, by Luis Suarez (67th), for the “Colchoneros”. Benzema caught up at the end of the match, with a valid skylight, this time (87th), followed by a victorious but insufficient goal from Luka Modric (90th + 2).

The FC Barcelona, kicked out of the title race last week, ended his season without Messi but with a nice goal fromAntoine Griezmann and a victory at Eibar, 1-0.

An exceptional start to the season

This is only the second time in 16 years that a team has managed to break the hegemony of Real and Barça in La Liga, after the feat of the “Rojiblancos” themselves in 2014, also sealed on the last day .

A coronation that has a taste of revenge for Atlético and his trainer-totem Diego Simeone. After the departure of many executives in the summer of 2019 (Antoine Griezmann, Lucas Hernandez, Diego Godin …) and after a season undermined by the Covid-19 pandemic last year, the Argentinian technician has been able to reinvent himself to find the perfect alchemy, and hoist his team on the roof of Spain.

He managed to attract the Uruguayan “gunslinger” Luis Suarez, suddenly dropped by Barça last summer; he intelligently repositioned Marcos Llorente and Thomas Lemar to make the most of their qualities; and at times made the effort to break out of his austere and rough 4-4-2 to inject a dose of spectacle into Madrid’s game.

After a great first part of the season, Atlético already accumulated 50 points after only 19 games played, and ahead of Real and Barça (40 pts each) by ten points in the standings. The second best record in the history of the Spanish Championship after 19 matches, behind Barça’s historic season in 2012-2013 (55 pts after 19 matches). Such a gap has never been seen in La Liga history.

Thus, the “Rojiblancos” marked the spirits, with a series of 14 victories in 15 La Liga matches between mid-October and the end of January.

The second part of the season was more complicated, but despite the series of matches, “Cholo” Simeone managed to keep his group under pressure and managed to manage injuries and cases of Covid-19. And Atlético, by clinging to its values ​​of tenacity and rigor, held out until the end to snatch, not without fear, this eleventh national crown.


A master stroke that elevates Diego Simeone even more to the rank of living legend of the Madrid club: the Argentine technician, in post since December 2011 and under contract until June 2022, compiles two Europa League titles (2012, 2018), two Champions League finals lost to Real (2014, 2016), and now two Spanish Championships (2014, 2021).

For his Merengue counterpart Zinédine Zidane, announced on the departure by the Spanish press, this failure symbolizes all the complexity of the season crossed: his Real Madrid has constantly faced up, dodging pitfalls such as fatigue and the sixty deplored injuries to return in the race … but failed to defend his national crown, gleaned last summer after the first confinement.

“Zizou” could therefore leave Madrid on a virgin season, without any trophy lifted in 2020-2021. Because this year, Spain belongs to Atlético.

The “rojiblancos” supporters will however have to calm their ardor and do without the traditional bath in the fountain of Neptune as on every evening of glory at Atlético: the Madrid authorities have banned gatherings to avoid any overflow, while the health situation s ‘improved in Spain for several weeks.

In DR Congo, the Nyiragongo volcano has erupted

in the UK, 15 million people have received at least one dose of the vaccine

restaurants in great difficulty in the United States