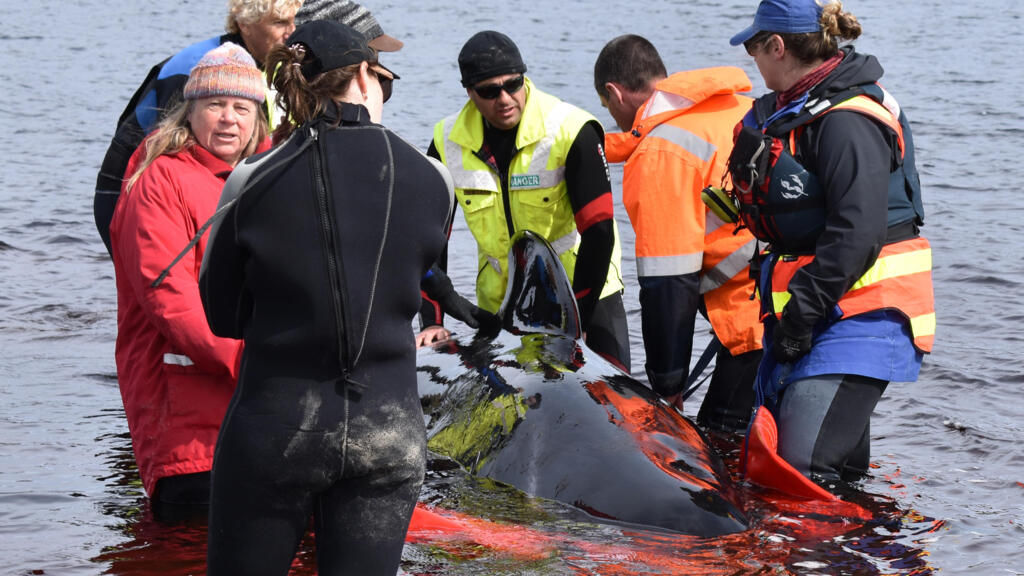 Australian rescuers had to resolve, Thursday, to euthanize “pilot dolphins” who had survived after being stranded in a Tasmanian bay, while 380 of their congeners have already perished.

Only a small ten 470 “pilot dolphins”, trapped in a Tasmanian bay, in Australia, can be saved, announced Thursday, September 24, the rescuers who resigned themselves to euthanize the most suffering, while 380 of their congeners have already perished.

The toll could worsen further, however, as the chances of survival dwindle over the hours. “We still have a few animals that are still alive and which we believe are in a condition to be moved,” said Nic Deka, the manager of Tasmania Nature Parks.

He explained that the rescuers, whose task is “physically trying”, will continue their rescue operations until nightfall as well as Friday. “It is likely that we will continue our efforts to save them tomorrow. We have focused on those who seem to be the most viable and with whom we are most likely to succeed,” he said.

About 60 people, including environmentalists and workers from nearby aquaculture farms, spent hours in the icy waters of Macquarie Harbor, amid the cries of dying cetaceans.

The “pilot dolphins”, which can be up to six meters long and weigh a ton, are known to be particularly outgoing. Some of them resisted the means deployed to save them and tried to return to their families after being released, which led them to run aground a second time.

To shorten their suffering

The level of distress of some pilot whales is such that the authorities said they had been forced to proceed with the slaughter of at least four “pilot dolphins” to shorten their suffering. “These four cetaceans were euthanized earlier today using firearms and special ammunition,” said Kris Carlyon, marine biologist in the Tasmanian Department of the Environment.

“We have a few more that we are currently reviewing on a veterinary basis,” he said. “This is based solely on animal welfare reasons,” he said. “It’s always something we think about and we only use it when necessary.”

On Thursday, rescuers focused their efforts on 20 to 25 cetaceans, partly submerged, using boats with cables attached to escort them out to sea. But now, they are forced to think about the best way to evacuate the carcasses of the nearly 400 mammals that have already perished.

“We are starting to develop a plan, we are prioritizing their disposal at sea. We continue to seek expert advice on exactly where they should be left,” said Nic Deka. Once abandoned, the carcasses will “swell and float” which can pose a danger to navigation, pollute the bay and attract sharks and other predators.

The reasons why cetaceans sometimes fail in droves this way remain unknown even to scientists who have studied this phenomenon for decades. Some researchers believe that these pilot whales could have deviated from their route, attracted by food located near the shore, or that they would have followed one or two of them who would have strayed.

For Kris Carlyon, this is a “natural event”, strandings of the species having occurred regularly throughout history, both in southern Australia and New Zealand, as well as than in other parts of the world. “We intervene in this kind of situation but there is little we can do to prevent it from happening again,” he said.

“Erdogan, assassin”, the Armenians of France in the street for the commemorations of the genocide

Faced with a record of infections, Argentina establishes its first curfew

already qualified for the “Final-4”, the Blues bite Sweden