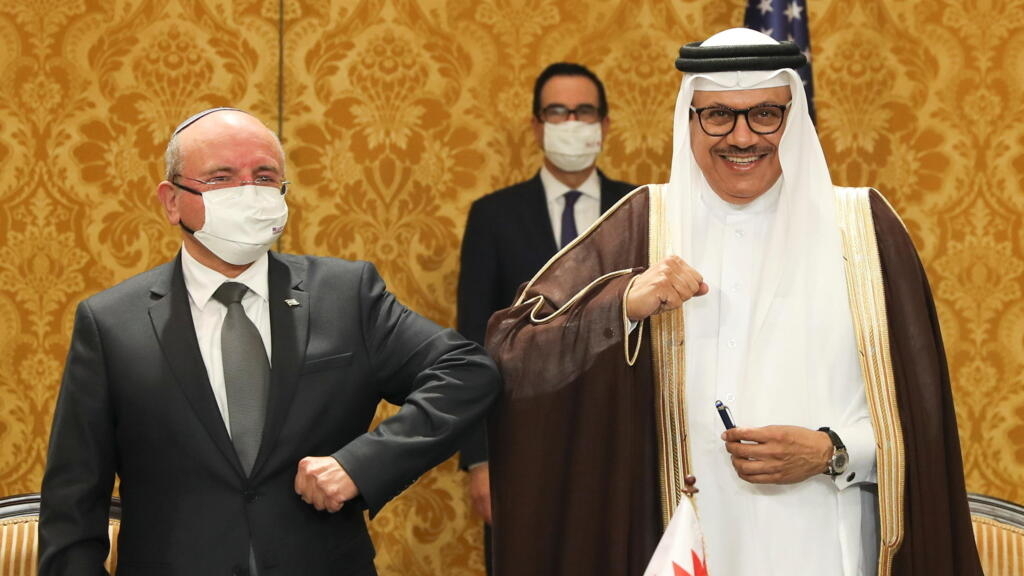 An Israeli delegation and representatives of Bahrain officially established diplomatic relations on Sunday (October 18) during a ceremony in Manama. The opening of a Israeli embassy is expected in the coming months, an Israeli official said.

Arab monarchy of the Gulf where the Ve American fleet, the small kingdom of Bahrain has become the fourth Arab country to normalize relations with Israel. Peace treaties were signed with Egypt in 1979 and with Jordan in 1994, ending the state of war with these neighboring Arab states.

Bahrain and the United Arab Emirates, another Arab Gulf monarchy, signed separate agreements with Israel on September 15 formalizing the normalization of their relations during a ceremony at the White House.

A common animosity towards Iran

The normalization agreements with Bahrain and the Emirates have been denounced by the Palestinians as a “betrayal”, while the resolution of the Israeli-Palestinian conflict was until then seen as a sine qua non for a normalization between Israel and the Arab states .

Before his departure from Tel Aviv, Meir Ben-Shabbat declared that the meetings in Bahrain had “for objective to translate into concrete programs the agreements signed at the White House”, in particular in the fields of economy, tourism, aviation and technology.

Came to Manama with the Israeli delegation, US Treasury Secretary Steven Mnuchin, stressed the “opportunity” that these agreements represent for the economies of the countries concerned, in particular in the field of technologies, in a statement to journalists during the flight.

The United Arab Emirates and Bahrain have never been in conflict with the Hebrew state. But they share with Israel an animosity towards theIran, the number one enemy of the United States in the region.

Ruled by a Sunni monarchy, Bahrain accuses Shia Iran of being at the origin of sporadic unrest in the kingdom since 2011, when authorities cracked down on protests by his Shiite community demanding reform. The normalization of diplomatic relations with Israel sparked protests in Shiite villages across the kingdom.

Saudi Arabia sticks to its positions

Israeli Prime Minister Benjamin netanyahu has repeatedly stated that other Arab countries could establish official relations with Israel, believing that these states now prioritize the economic aspect rather than the resolution of the Israeli-Palestinian conflict which has lasted for more than fifty years.

The American administration of Donald trump tries to convince other Arab countries to get closer to Israel, close ally of Washington.

Earlier this week, Secretary of State Mike Pompeo, said he hoped that Saudi Arabia, leader of the Arab Gulf monarchies and Iran’s rival in the region, “would consider normalizing relations [avec Israël]”.

According to him, the agreements with the Emirates and Bahrain “reflect the changes in the dynamics of the region”. “These countries rightly recognize the need for regional cooperation to counter Iranian influence and foster prosperity.”

Recognition of Israel bySaudi Arabia would be a real turning point in the Middle East. But the kingdom has made it clear that it will not follow the example of the Emirates and Bahrain, which have broken an “Arab consensus” conditioning any normalization with Israel on a settlement of the Israeli-Palestinian conflict.