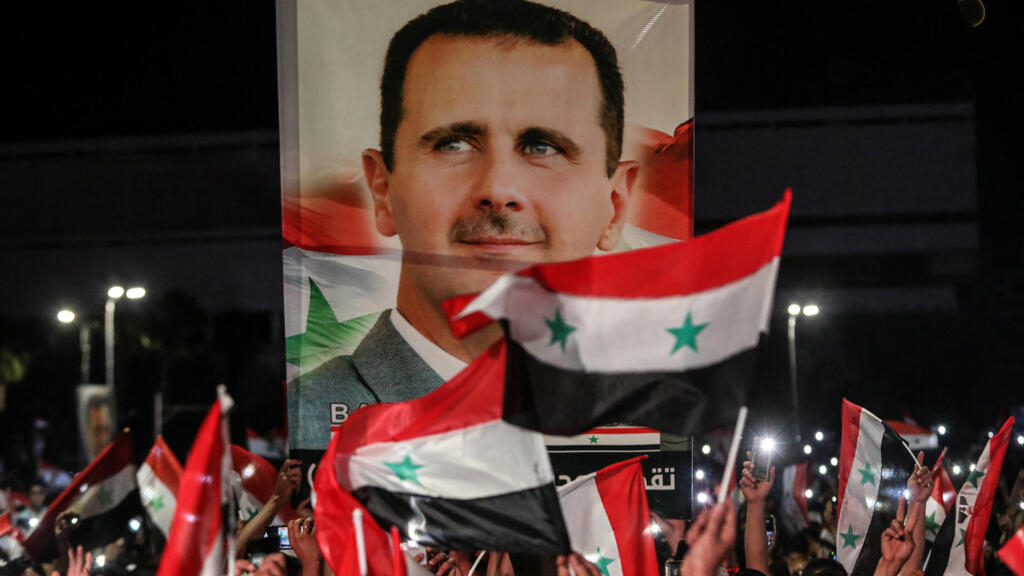 Bashar al-Assad was unsurprisingly re-elected president of Syria for a fourth term on Thursday. The ballot was held in areas under government control and in a country in the throes of economic slump ravaged by a decade of war.

Bashar al-Assad was re-electedu end of a puppet election. At a press conference on Thursday, May 27, the Speaker of Parliament, Hammoud Sabbagha, announced that Mr. Assad had been re-elected with 95.1% of the vote.

According to Mr. Sabbagha, 14.2 million people took part in the poll, out of the 18.1 million theoretically called to vote, i.e. a participation rate of 76.64 %.

Propelled to power in 2000, succeeding his father Hafez, who died after 30 years of unchallenged reign, Mr. Assad had castigated the West, Washington and Europeans deeming that the election was not free.

In 2014, he obtained more than 88% of the vote, according to official results.

As the counting of the votes drew to a close, tens of thousands of Syrians gathered in several towns across the country.

In the port city of Tartous (west), crowds waved flags and portraits of Bashar al-Assad while some danced while beating drums, according to images broadcast by Syrian television.

Thousands of people also gathered in the coastal city of Latakia and in Umayyad Square in Damascus.

In Soueida, a city in the south of the country, a crowd also gathered in front of the governorate building, while in Aleppo, men were finishing the assembly of a platform.

This is the second presidential election since the start, in 2011, of a devastating war involving a multitude of belligerents and foreign powers. Born from the repression of pro-democracy demonstrations, this conflict has left more than 388,000 dead. The fighting has now clearly decreased in intensity.

If officially the country has a little over 18 million voters, their number is actually lower, the war having divided the country and led to the flight abroad of millions of people.

In a country with ruined infrastructure, Bashar al-Assad presents himself as the man of reconstruction, after having chained, since 2015, military victories with the support of his allies, Russia and Iran, taking up the two-thirds of the territory.

The Kurdish autonomous regions of the northeast ignored the ballot. Just like the last great jihadist and rebel stronghold of Idleb (north-west), which is home to some three million inhabitants.

Two personalities considered to be stooges presented themselves against Bashar al-Assad: the former minister and parliamentarian Abdallah Salloum Abdallah and a member of the opposition tolerated by the government, Mahmoud Mareï.

“Your opinions are worth nothing,” Mr. Assad had launched this week, addressing Western countries which had judged that the election was “neither free nor fair”.

The election took place in the midst of an economic slump, with a historic depreciation of the currency, rampant inflation, and more than 80% of the population living in poverty according to the UN.

Syria, like Mr. Assad himself, is the target of international sanctions. And the needs for reconstruction are huge.

A recent report by the NGO World Vision estimates the economic cost of the war at more than 1,200 billion dollars (just over 1,000 billion euros).

in the face of criticism, Total distances itself from the military

In Brazil, two heavyweights of the Bolsonaro government resign

the Court of Cassation definitively acquits the activist Cédric Herrou

A senior US official visits Western Sahara, a first