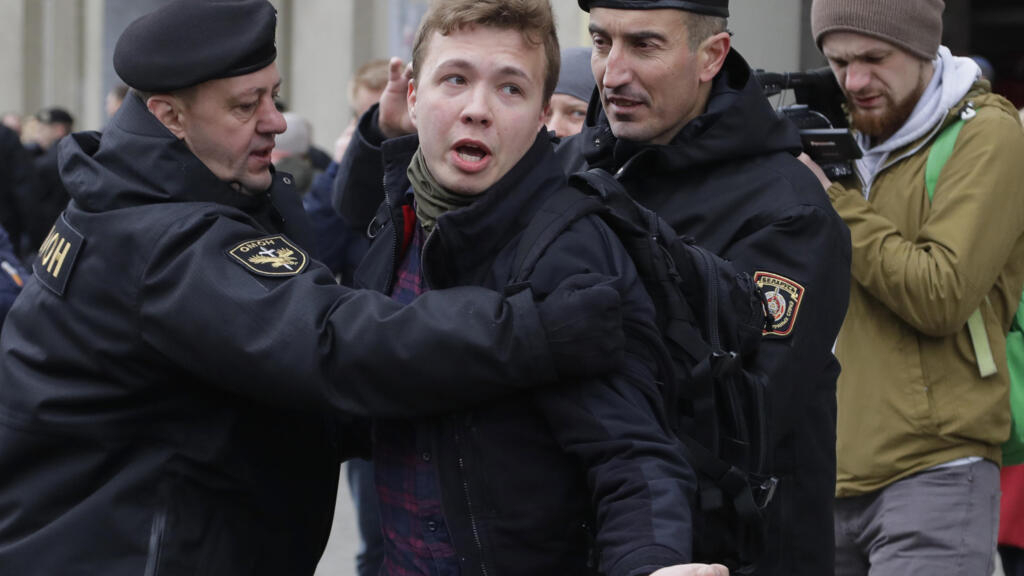 An airliner operating the route between Athens, Greece, and Vilnius, Lithuania, was intercepted and diverted by Belarus to Minsk on Sunday. Roman Protassevich, an opposition activist who was on board, was arrested on landing in the Belarusian capital, according to opposition media Nexta.

Belarus sent a fighter on Sunday, May 23, to intercept an airliner on board which was an opposition activist who, according to the latter, was arrested on his arrival in Minsk by the security services of the regime ofAlexander Lukashenko.

Opposition media Nexta claimed that its former editor-in-chief Roman Protassevich was arrested after an emergency landing at the airport in the capital of Belarus of this aircraft, a Boeing 737 of the company Ryanair in from Athens and with destination Vilnius in Lithuania.

The Belarusian Interior Ministry initially confirmed this arrest on Telegram, before deleting this message, noted an AFP journalist.

According to the authorities, the plane deviated from its trajectory because of a “bomb threat”. Nexta claimed that the emergency landing was sparked by a “fight” started by Belarusian security agents, who were on board and who claimed that an explosive device was in the aircraft.

Minsk airport, quoted by the official Belta news agency, claimed that the bomb threat was “wrong” after a search of the Boeing.

Last summer and fall, Alexander Lukashenko was confronted with a historic protest movement having gathered for several weeks tens of thousands of people in Minsk and in other cities, an enormous mobilization for a country of barely 9.5 million inhabitants.

But the protest gradually ran out of steam in the face of mass arrests, police violence that left at least four people dead, permanent judicial harassment and heavy prison sentences imposed on activists and journalists.

“Fight with the KGB”

Last November, the Belarusian security services (KGB), inherited from the Soviet period, had placed Roman Protassevich and the founder of Nexta, Stepan Poutilo, on the list of “individuals involved in terrorist activities”.

Current Nexta editor-in-chief Tadeusz Giczan said Belarusian KGB agents were on board the aircraft. “When the plane entered Belarusian airspace, KGB officers started a fight with Ryanair staff,” said Tadeusz Giczan, officers claiming that a bomb was on board.

Contacted by AFP, a spokesperson for Lithuanian airports said that she had received as a first explanation from Minsk airport a conflict between passengers and the crew.

Roman Protassevich is the former editor-in-chief of Nexta, a media outlet that played a key role in the recent wave of protests against the 2020 re-election of President Alexander Lukashenko, who has held the post since 1994.

Founded in 2015, Nexta (“Someone” in Belarusian) had notably coordinated rallies across Belarus, broadcasting slogans and sharing photos and videos of rallies and violence.

The activist’s arrest was immediately condemned by Belarusian opposition figure in exile, Svetlana Tikhanovskaya. On Twitter, she assured that the regime had “forced” Roman Protassevich’s plane to land which, according to her, “incurs the death penalty”.

The regime forced the landing @Ryanair plane in Minsk to arrest journalist and activist Raman Pratasevich. He faces the death penalty in Belarus. We demand immediate release of Raman, @ICAO investigation, and sanctions against Belarus. pic.twitter.com/ondPBd0kU9


The former Soviet Republic of Belarus is the last country in Europe to apply the death penalty.

The leaders of the European Union have jointly called on Belarus to let the Ryanair plane leave, and to allow “all its passengers” to continue their journey, denouncing “a completely unacceptable action”.

“We hold the government of Belarus responsible for the safety of all passengers and the aircraft. ALL passengers must be able to continue their journey immediately,” tweeted EU Foreign Minister Josep Borrell.

We hold the government of Belarus responsible for the security of all passengers and the aircraft.
ALL passengers must be able to continue their travel immediately. (2/2)


Earlier, Germany had already called for an “immediate explanation” after the diversion of the plane.

Polish Prime Minister Mateusz Morawiecki, meanwhile, called Roman Protassevich’s arrest an “act of state terrorism” after his flight was forced to land in Minsk by a Belarusian fighter plane.

For its part, Paris denounced an “unacceptable” situation, and calls for a “firm and united response” from Europeans.

“The hijacking by the Belarusian authorities of a @Ryanair flight is unacceptable. A firm and united response from the Europeans is essential,” French foreign minister Jean-Yves Le Drian said on his Twitter account.

The hijacking by the Belarusian authorities of a theft of @Ryanair unacceptable. A firm and united response from the Europeans is essential. All passengers on this flight, including any Belarusian opponents, must be allowed to leave without delay. # Belarus.


The President of Lithuania, Gitanas Nauseda, for his part denounced on Twitter “an unprecedented event”, accusing the Belarusian regime of having been behind “this despicable act”. “I demand the emergency release of Roman Protassevich!”, He continued, assuring: “I will speak about it at the EU summit in Brussels”, next week.

The current repression in Belarus earned Minsk a battery of Western sanctions which led Alexander Lukashenko to get closer to his Russian counterpart, Vladimir Putin.

“It is too early to judge the effect of the reconfinement”, according to Olivier Véran