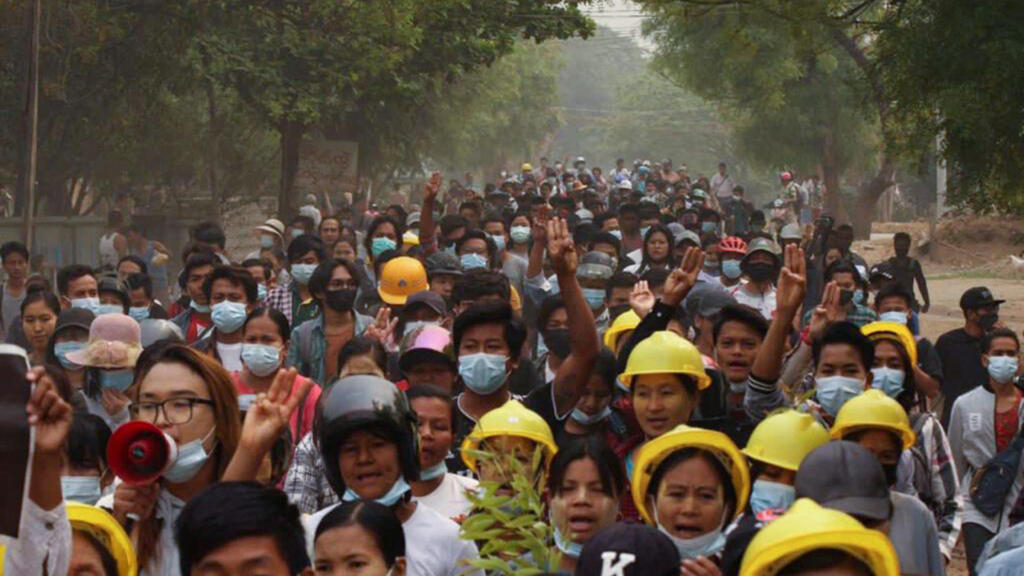 Pro-democracy demonstrators again braved the violence of the police to pound the pavement on Monday in Burma after a bloody weekend that left more than a hundred dead, including several children.

In Burma, murderous repressions did not dissuade pro-democracy protesters take to the streets, Monday March 29. Despite the strong condemnation of the international community, the rallies left more than a hundred dead, including several children.

The army, which overthrew the head of civilian government Aung San Suu Kyi, represses in blood the daily demonstrations calling for the return of democracy and the release of the former leaders.

The UN estimated at 107, including seven children, the death toll on Saturday during the massive protests organized against the junta which paraded on the traditional “day of the armed forces”, but expects this toll to increase further. . Local media report 114 dead.

The people will never be defeated

Army-run Myawaddy TV reported 45 dead on Saturday, the bloodiest day since the military coup, justifying the crackdown by claiming protesters used guns and bombs against the security forces.

At least 459 people have been killed since the putsch, with another 13 dead on Sunday, according to the latest report from the Association for the Assistance to Political Prisoners (AAPP), a local NGO which identifies the victims of the repression.

Two journalists were arrested in Myitkyina, capital of Kachin state. A total of 55 journalists have been arrested since the putsch and 25 remain in detention, according to a local organization.

The funerals of the victims of the weekend crackdown continued. In the Sagaing region (center), hundreds of people paid tribute to Thinzar Hein, a 20-year-old student nurse who was shot dead while coming to help rescuers treat injured protesters.

China called on all parties for restraint on Monday after a concert of indignant condemnations from the international community in the face of the bloodshed committed this weekend.

“The violence and bloody clashes do not meet the interests of any of the parties,” Chinese Foreign Ministry spokesman Zhao Lijian said. “The victims are the Burmese”.

The Kremlin, for its part, says it disapproves of the bloody crackdown on protests in Burma, worrying about the “growing” number of civilian deaths.

The European Union had also condemned “an unacceptable escalation of violence” and “a senseless path” chosen by the junta, in a statement from its foreign minister Josep Borrell referring to a “day of horror and shame”.

“The shameful, cowardly and brutal actions of the army and the police – filmed shooting protesters as they fled and which did not even spare young children – must be stopped immediately,” according to one joint statement by two senior UN officials, Michelle Bachelet and Alice Wairimu Nderitu.

An unusual joint statement from the heads of the defense forces of 12 countries including the United States, Great Britain, Japan and Germany had also denounced the use of force by the Burmese army against “unarmed civilians” “.

The British Foreign Office on Monday advised its nationals in Burma to leave as soon as possible. The day before, the American embassy in Yangon had asked its citizens to limit their movements.

International convictions and sanctions, however, hardly seem to influence the junta. Its leader, General Min Aung Hlaing, warned on Saturday that acts of “terrorism which can harm the peace and security of the state are unacceptable.” He again justified the putsch, citing fraud in the November elections won by Aung San Suu Kyi’s party, and promised elections.

Death of Sarah Obama, the Kenyan "grandmother" of the former president

towards a postponement of the elections for a Constituent Assembly

Galapagos sees record rise in numbers of penguins and cormorants