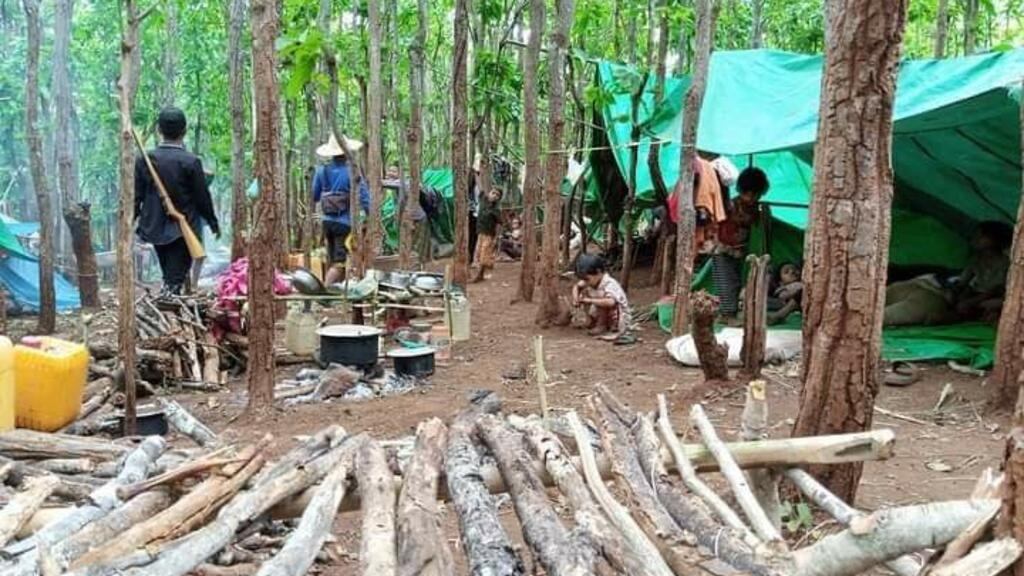 Fighting between local militias and the Burmese army has forced tens of thousands of people in Kayah state in eastern Burma to flee their homes to avoid attacks, arrests and searches. While some took refuge in community centers inside towns, others fled to nearby jungles, creating makeshift camps.

Three months after the military seized power by overthrowing the democratically elected government in Burma, on 1er Last February, Burmese citizens continue to resist the military regime. Strikes, protests and a movement of civil disobedience are met with deadly force from the authorities, which have killed at least 800 people, according to local observers, while thethe military junta affirms that the balance sheet of the clashes is much less important evoking the figure of 300 dead.

On May 5, the anti-junta resistance government in Burma baptized “government of national unity” and formed in mid-April, called for the creation of a “National People’s Defense Force” to protect civilians from the junta. Following this announcement, residents of Kayah State – formerly known as Karenni State – created a militia called the “Karenni People’s Defense Force” (KPDF), summarily armed with traditional hunting rifles.

Other long-standing armed ethnic groups in Kayah State, including the Karennie army, who fought the Burmese government from 1957 until a ceasefire in 2012, also mobilized against the junta. On May 21 and 22, members of the KPDF clashed with the Burmese military, sparking a week of escalating violence for locals.

Our Observer Aung (pseudonym) is a community leader in Loikaw, capital of Kayah State. He testifies to the explosion of violence in his region over the past week:

A few days ago, on May 21, the KPDF was crushed by military forces. They started to defend themselves, then attacks resumed from both sides. The military has discovered that the KPDF is able to cope with them, which is why new attacks are happening here.

On May 21, soldiers entered the town of Demoso, opened fire and arrested 13 people, according to Burmese media. The KPDF retaliated, killing three policemen and attacking police stations in the area. The military has deployed reinforcements, tanks and helicopters, notably to Demoso, and increased its presence in several towns in Kayah state and neighboring Shan state.

On the 25th, the fighting lasted most of the day. The army used tanks and machine guns, we heard at least seven rockets flying from Loikaw towards Demoso. There was a lot of damage to Demoso. Security forces shot people on the roads and even broke into homes.

Photos posted on Twitter on May 28 showing damage to homes in Demoso.

Photos posted on Twitter on May 25 show damage to homes in Demoso.

“They couldn’t stay at home, there can be a lot of trespassing, attacks or arrests”

To avoid military shelling and continued clashes between the junta and militia, residents of towns in Kayah state fled their homes to seek shelter. Aung says:

There are two groups of people hiding. Some people try to hide in the city and others in the jungle. In the city, the elderly, infants, women and the sick flocked to community places like a church, a convent and a home for the elderly. These places turned into refugee camps. They could not stay at home, because it is not without danger, especially at night when there can be a lot of intrusions, attacks or arrests.

Church and convent officials said these places are for the safety of people and should not be attacked. But we still don’t know what could happen and the military can do whatever they want.

On Sunday May 23, a church near Loikaw, where more than 300 people had taken refuge, was the target of military bombing. Four people were killed in the attack and the church was badly damaged.

Since then, religious buildings providing refuge to civilians have started hoisting white flags to ward off further attacks by military forces.

Photos posted on Twitter on May 27 showing damage to the Church of the Sacred Heart near Loikaw after the military bombing of May 23.

“They flock to the mountains, to the jungle, for their safety”

Many people living in small villages outside of Loikaw and Demoso have instead chosen to flee to the uninhabited hills and nearby jungles. Although our Watcher Aung remained in Loikaw, her family members all moved to the jungle.

In the jungle and in the mountains, these people who have fled think that the military cannot have access. But they had to abandon their homes and leave their villages, their properties and their animals.

Those who are in the jungle camps are, for the most part, the elderly, the sick, women and children. The men are in other places to defend them in case the army comes. From time to time, the men return to the village and go to look for food.

The inhabitants of these jungle camps depend mainly on what little possessions they have been able to take with them to survive. Aung shared photos of these makeshift accommodations with the editorial staff of France 24 Observers.

According to Burmese media reports, at least 50,000 people from Loikaw and Demoso have fled their homes. Another 20,000 people from the towns of Pekhon and Moebye in neighboring Shan state are also reported to have gone underground. Although it is impossible to confirm these figures, these groups are at risk of going hungry and sick if they are not able to return to their villages soon, says our Observer Aung.

REFUGEES in Karenni (Kayah) State had to relocate to other parts today evening due to continuous rains. The refugees live in the jungle were unable to reach by social workers.

Photos posted on Twitter May 29 show the impact of heavy rain on the temporary encampments set up by Kayah State residents fleeing military violence.

Even short trips around town to collect food and building materials can be very dangerous. On May 26, two civilians were shot by military snipers while they were riding a motorbike. According to Burmese media reports, they were returning home to collect food to take to families who had retired to the hills.

According to Aung, security forces are highly visible on the streets of townships in Kayah state.

In the streets of Loikaw and Demoso, there are soldiers and police everywhere. People are afraid to walk around and it is dangerous for those who travel on the road. There are tanks everywhere. At night, they move, the soldiers march, and I also hear shots. One night, they walked the streets for two hours, but just to scare people and silence them.

1/2
Two KPDF fighters were killed and several others were injured in a shootout between the People’s Defense Forces and the military council in #Demawso Township, #Kayah state at 5.30 am on May 25, a ground source told.#WhatsHappeningInMyanmar pic.twitter.com/STBh6AdmVc

A video posted on Twitter May 25 shows tanks and soldiers on the streets of Demoso.

Video posted on Twitter on May 25 showing tanks and soldiers on the streets of Demoso.

According to other witnesses on the ground contacted by the editorial staff of France 24 Observers, the security forces have set up roadblocks and regularly check the cell phones of people in the street, looking for evidence of anti-sympathy. junta.

Other parts of Burma are experiencing similar conflicts between resistance groups and the military junta. About 10,000 villagers from the Sagaing region fled their homes to avoid military attacks.

In Burma, the junta frees more than 23,000 prisoners

In Cameroon, several dozen dead in a bus accident