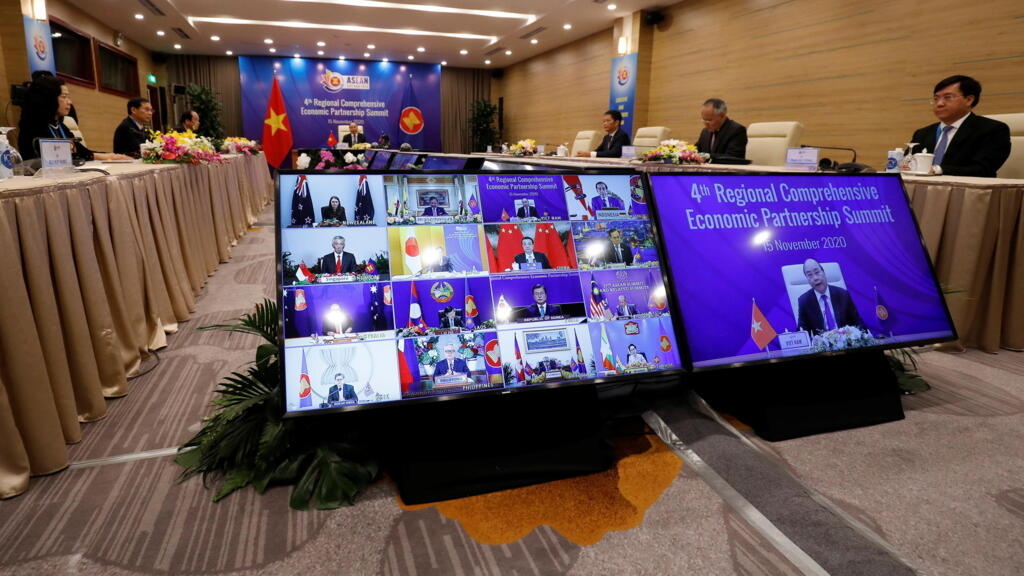 Fifteen countries in Asia and the Pacific signed an important trade agreement on Sunday, on the occasion of the closing of a virtual summit of ASEAN which began on Thursday. Promoted by China, it will be the largest trade agreement in the world, including China, Japan, South Korea and Singapore.

It will be the world’s largest trade deal in terms of Gross Domestic Product, analysts say. Fifteen countries in Asia and the Pacific signed the Regional Comprehensive Economic Partnership (RCEP) on Sunday (November 15th) on the occasion of the closing of the virtual summit of the Asean, having started on Thursday. Promoted by China, this agreement will concern more than 2 billion inhabitants.

“I am happy that after eight years of complex negotiations, we can officially end the RCEP negotiations today,” said Vietnamese Prime Minister Nguyen Xuan Phuc, whose country holds the rotating presidency of ASEAN.

This pact, the idea of ​​which dates back to 2012, is considered as the Chinese response to the American initiative of the Trans-Pacific Free Trade Treaty (TPP), now abandoned.

It “consolidates regional geopolitical ambitions wider areas of China around ‘new silk roads‘”, analyzes Alexander Capri, professor at the Business school of the National University of Singapore.” It is in a way a complementary element “of this flagship instrument of the strategy of influence of Beijing on the world.

“In the current global circumstances, the fact that the RCEP was signed after eight years of negotiations brings a ray of light and hope amid the clouds,” Chinese Premier Li Keqiang said after the virtual signing.

Fight against the economic crisis due to Covid-19

The RCEP, whose members represent 30% of global GDP, will be “a major step in the liberalization of trade and investment” in the region, said Rajiv Biswas, chief economist for Asia and the Pacific of the consultant. IHS Markit.

The signing of this agreement comes in a context of severe economic crisis due to the Covid-19 epidemic for the ten members of Asean.

They have high hopes for this agreement, which should allow them to boost their economies by making their products cheaper to export, and by making life easier for their companies through the harmonization of procedures.

But many signatories are still battling the pandemic and hope RCEP will help them alleviate the cost. Indonesia recently entered its first recession in two decades, while the Philippine economy contracted 11.5% year-on-year in the third quarter of 2020.

“The Covid has reminded the region why trade matters and governments are more keen than ever for positive economic growth,” said Deborah Elms, executive director of the Asian Trade Center, a consultancy firm based in Singapore.

The agreement also includes intellectual property, but excludes anything relating to the protection of workers and the environment.

India was also due to join this unprecedented trade pact but decided last year to withdraw from it for fear of seeing cheap Chinese products invade its market. New Delhi, however, has the option of joining this agreement later.

This trade pact is also widely seen as the way for China to expand its influence in the region and determine the rules, after years of passivity on the part of the United States, notably during the presidency of Donald Trump.

In January 2017, the latter had withdrawn his country from the major competing project, the Trans-Pacific Free Trade Treaty (TPP), promoted by his Democratic predecessor Barack Obama.

Quality socks for your team

Algeria announces the withdrawal of its accreditation to France 24