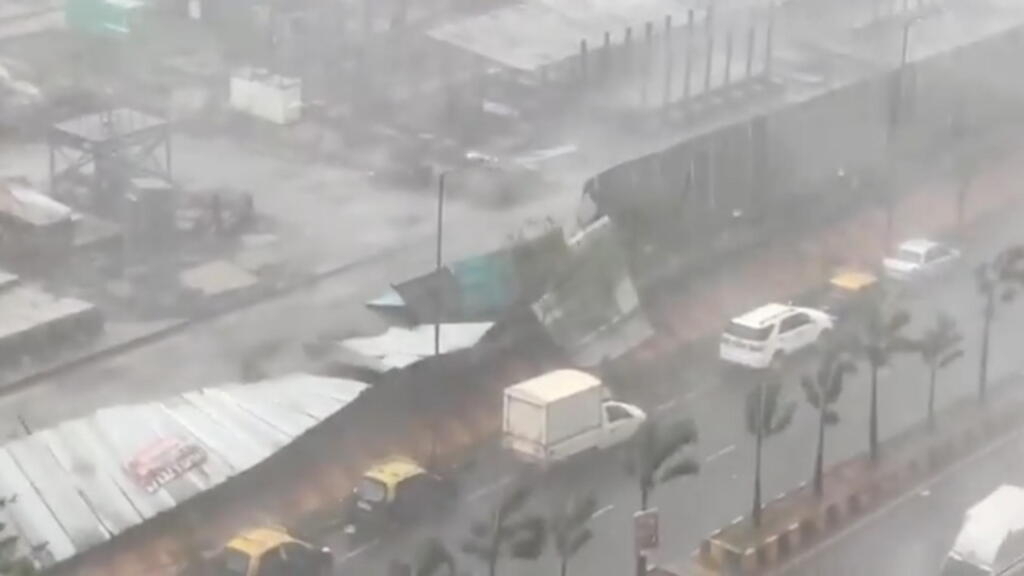 Several people died when a cyclone hit India on Monday as the country, which faces a terrible new wave of the Covid-19 pandemic, is already suffering from a lack of oxygen and space in hospitals.

Indian meteorological services announced in the evening that the state of Gujarat (northwest) had started to be affected by this powerful cyclone, leading to the evacuation of thousands of people, including Covid-19 patients evacuated from several hospitals .

A woman was killed when an electric pole collapsed in the town of Patan in northern Gujarat, officials said.

At least 20 people died over the weekend due to torrential rains and strong winds when Tauktae, the biggest storm to hit western India in 30 years according to media reports, crossed the Arabian Sea.

The “extremely severe cyclonic storm” is accompanied by winds of 155 to 165 km / hour, with gusts of up to 185 km / hour, the Indian meteorological service warned.

Sea level rose three meters along the coast, meteorological officials in the coastal town of Diu said, with winds of 133 km / h.

Six people died and nine were injured when the cyclone hit the state of Maharashtra, of which Bombay is the capital.

Two Indian Navy boats were sent to try to rescue a boat carrying 273 people and reported to be in distress off Bombay. Twenty-eight people have been rescued so far, the defense ministry said.

Tauktae strikes India as the country faces a second epidemic wave of great violence, which kills more than 4,000 every day. Hospitals are overcrowded, health workers are exhausted, oxygen and medicines are lacking.

Bombay (West), capital of the state of Maharashtra, is already flooded. The authorities closed the airport on Monday for several hours and asked the population to stay sheltered after having had to evacuate 580 Covid patients “to safer places” from three field hospitals on Sunday. Maharashtra evacuated around 12,500 people from coastal areas.

In Gujarat, more than 100,000 people were evacuated to 17 districts overnight from Sunday to Monday and all Covid-19 patients treated in hospitals located five kilometers from the coast were also displaced.

The authorities in this region are working to avoid any power cuts in the some 400 hospitals and 41 oxygen plants in the 12 coastal districts where the cyclone is expected to strike the hardest.

Health protocols against the virus, such as wearing masks, physical distancing and the use of disinfectants, will be observed in shelters for evacuees, officials said.

The state of Gujarat, which has officially recorded 9,000 deaths from the virus – a toll probably undervalued as everywhere in the country, according to experts – also suspended the vaccination campaign for two days. Bombay did the same for a day.

Rescuers on the war footing

“This cyclone is a terrible double sorrow for millions of people in India”, reacted in a statement Udaya Regmi, of the International Federation of Red Cross and Red Crescent Societies.

Thousands of rescuers were mobilized to face the first big tropical storm of the season and units of the coast guard, navy, army and air force were placed in a state of repair. alert, Interior Minister Amit Shah said.

Four people died on Saturday due to torrential rains and strong winds hitting the state of Karnataka (southwest), according to the emergency management agency. Two people have also died in the tourist state of Goa, local government chief Pramod Sawant said on Sunday. According to local media, two other people lost their lives and 23 fishermen are missing in the neighboring state of Kerala (South).

African economies: a summit to emerge from the crisis and finance development

Women leaders in Senegal: skills above all?

Boris Johnson is betting on a green raise

the roadblocks and the standoff continue