Did the police allow the demonstrators to invade the Capitol? What the amateur pictures show 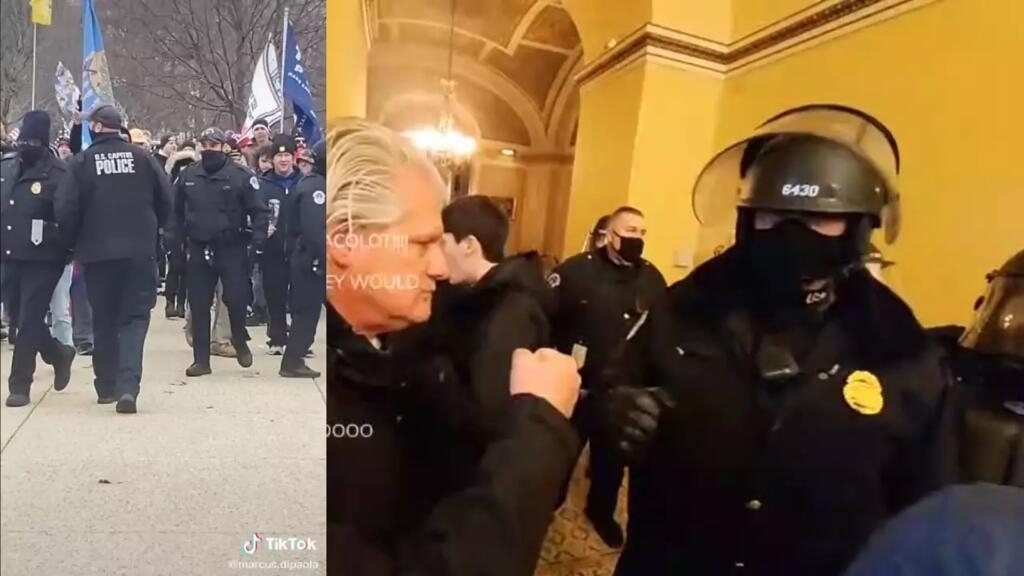 On January 6, supporters of incumbent President Donald Trump took to the Capitol in Washington, knocking down barricades and turning offices upside down in order to disrupt the validation of Joe Biden’s election by US parliamentarians. Several amateur videos have documented the bankruptcy of the police protecting the building: the latter is widely criticized on social networks for its insufficient response to the crowd, or even accused of complicity in the insurgency.

The marching speeds to the Washington DC Capitol had been largely shared on social networks by supporters of Donald Trump for several weeks, including on TikTok, Twitter or even on TheDonald, a pro-Trump discussion forum. However, by January 6, the police presence around the Capitol had not been particularly strengthened.

Photos and videos taken the same day and posted on social media reveal ill-prepared law enforcement officials in the face of a crowd of thousands attempting to enter the building.

The video below shows, for example, a group approaching the barricades in front of the lawns of the Capitol shortly before 1 p.m. There are only a dozen police officers there, totally overwhelmed by the crowd which begins to push them. One of them tries to hold back the barriers for a few seconds before retreating.

WHOA — The US Capitol siege today started at this exact moment – when the Capitol police were completely caught off guard when rioters stormed the fence and overran them. Where was the backup? Why wasn’t the National Guard pre-stationed there? So angry. 😡 pic.twitter.com/rQ2UT4BZTj

After reaching another barricade in front of the Capitol stairs, police and protesters face each other, each using tear gas canisters, with one of the police punching a protester.

In this video, posted 15 minutes before the crowd entered the Capitol, police officers equipped with riot gear try to hold back the crowd of rioters who approached the entrance to the Capitol building. No crowd control devices, such as tear gas or rubber bullets, can be seen in this video.

BREAKING: Trump supporters have breached the Capitol building, tearing down 4 layers of security fencing and are attempting to occupy the building – fighting federal police who are overrun

This is the craziest thing I’ve ever seen in my life. Thousands, police can’t stop them pic.twitter.com/VVdTUwV5YN

Who moved the barricades?

Another video that has gone viral shared on TikTok by journalist Marcus Di Paola shows police at another Capitol entrance point retreating as crowds arrive at the stairs. This video was widely relayed, and used as proof of the complacency of the police who allegedly let the demonstrators pass. However, there is nothing in the video to distinguish who removed the barricades. We just see the police retreating towards the building.

After reaching the building, pro-Trump protesters smashed windows and forced open doors to gain entry into the Capitol.

At the entrance to the Capitol, protesters smashed a window in an attempt to enter. This video shows a lonely policeman trying to keep the door closed, as a large crowd tries to open it.

Another video taken inside the Capitol shows that no police were present in the building to secure the entrance.

After protesters forced another entrance door to the Capitol, several police officers were called in to reinforce the inner door.

Inside, protesters again clashed with police in an attempt to gain access to the venue where Congress was meeting to confirm the election of Joe Biden. In this video, outnumbered cops attempt to drive Donald Trump supporters away with batons. The crowd eventually pushes the police.

While demonstrators were able to enter the chambers of the Senate, agents of the secret service and police officers from the Capitol in plain clothes were able to protect the entrances to the House of Representatives. A protester, Ashli ​​Babitt, was shot and killed by an officer as she tried to enter a window and enter the secure area. A video posted on Twitter after the incident captured the scene.

After several hours inside the Capitol, the crowd was expelled after the use of tear gas and stun grenades by law enforcement officials.

After about four hours of the attempted coup by the MAGA crowd, law enforcement are now using teargas and flash bangs to disperse the people away from the Capitol. pic.twitter.com/Afw7tECT9E

Police officers who sympathize with the demonstrators?

In the wake of demonstrators infiltrating the Capitol, several police officers were photographed taking selfies, shaking hands or fist-to-fist with protesters.

In a video filmed live by far-right activist Tim Gionet, known as “Baked Alaska”, a policeman can be seen “checking” with two supporters of Donald Trump as well as Tim Gionet. After making this gesture, the policeman tells them “Guys, you have chosen the worst day to come here”, to which the videographer replies: “I’m just filming”.

Other similar exchanges can be seen in Tim Gionet’s cover. Two policemen exchange a brief handshake with a protester before saying: “We did our job, let’s go”.

Finally, another policeman takes a selfie with a protester, even sticking his thumb up in front of the camera. When Tim Gionet tells him “1776 is coming, my brother”, the policeman replies: “I think it is already the case”. The year 1776 corresponds to the declaration of independence of the United States, making the American Nation a sovereign nation.

On social media, many netizens compared these interactions with Trump supporters and the police response to the Black Lives Matter protests in Washington last June. During these events, the National Guard was present in large numbers outside national monuments, and rubber bullets had notably been used against a group of peaceful demonstrators.

A member of Congress also publicly astonished of the complicity of the police during the events of the Capitol. A senior official has on his side declared, Wednesday, to journalists, that layoffs would quickly take place within the Capitol Police following the “lack of professional planning” in crowd management. Law enforcement officials also said that they did not indeed foresee the scale of the demonstration and that “chemical irritants” had been used to cross police barricades, a reference to gas. pepper used by some of the protesters.

Although 350 members of the National Guard Washington DC were deployed ahead of Donald Trump’s planned march, many of them stationed several blocks from the Capitol. And 1,100 other soldiers were called in as reinforcements after the protesters entered the building.

Four people died and 52 were arrested during the incident, which many commentators called a “failed coup”. Of the 52 people arrested, 47 are accused of violating the 6 p.m. curfew put in place by the mayor of Washington.