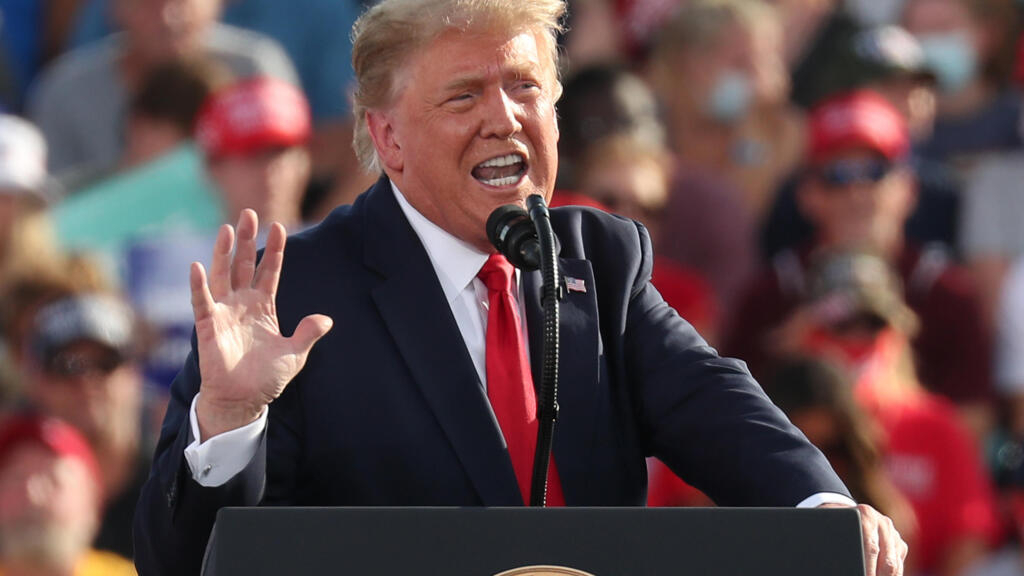 According to the American media Bloomberg, Donald Trump instructed one of his relatives to secretly negotiate the departure of Nicolas Maduro. Another attempt by the US president to shine his diplomatic record and tip the election.

Donald Trump negotiated in secret with Nicolas maduro for a peaceful departure from power. This is what said the American chain Bloomberg, Wednesday October 21. Citing sources familiar with the negotiations, Bloomberg explains that Donald Trump sent Richard Grenell, the former ambassador to Germany and former acting director of intelligence, to meet with Jorge Rodriguez, a former vice president of Venezuela close to Maduro, on September 16. last, in Mexico City.

The US government has reportedly tried to negotiate a peaceful departure of the Venezuelan leader, whose re-election in 2018 is considered fraudulent by many countries. However, the negotiations came to nothing, according to the same sources.

The United States wants to keep an open channel

Several specialists interviewed by France 24 believe that the American president is seizing the opportunity to obtain a new diplomatic victory by causing the departure of the Chavista leader, in order to relaunch himself in the presidential race, in Florida in particular, “swing state “Where he must ensure the vote of the Hispanic minority.

“For Donald Trump, it is important to secure the Venezuelan-American vote because that could make the difference in Florida,” Mariano de Alba, a Venezuelan lawyer specializing in international relations, based in Washington, told France 24. To provoke this mobilization, “he also compares Joe Biden and his program to the socialism that Venezuelans have fled. He can also take advantage of the significant diplomatic and economic pressure that his government has exerted against Nicolas Maduro throughout his mandate. “

However, Jean-Jacques Kourliandsky, director of the Latin America Observatory of the Jean-Jaurès Foundation and associate researcher at Iris, interviewed by France 24, warns that this tactic of rapprochement can be double-edged: “The Venezuelans and Cubans in Florida are more like hard-wing Republicans. A hand extended by Trump to Maduro could be seen as an admission of weakness. “

“This is not an evolution but a confirmation that, behind the strong rhetoric against Nicolas Maduro, the Trump administration maintains a channel of communication with the officials of the Venezuelan government”, explains Mariano de Alba. “Publicly, the US government says the only thing it is willing to negotiate with Maduro is his departure from power. But this year has proven that other issues can be debated, such as the possible release of Maduro.Americans imprisoned in Venezuela. “

Indeed, six former executives of Citgo, the American subsidiary of the Venezuelan oil giant PDVSA, five of whom have dual Venezuelan and American nationality, are currently detained in Venezuela. But, according to the White House cited by the New York Times, this topic is not on the agenda.

This negotiation, which took place secretly in Mexico, also reveals that the United States now wants to change its strategy. So far the administration relied on Juan Guaido, self-proclaimed president of Venezuela since January 2019 and recognized as such by the United States and some fifty countries, including France.

“Relations between Juan Guaido have cooled since February 2019. The humanitarian concert was to be the prelude to the seizure of power by Juan Guaido, who promised to be supported by the population and the military. None of this happened product “, explains Jean-Jacques Kourliandsky. “Donald Trump, true to his preference for strong men and ‘winners’, now sees Juan Guaido as a ‘loser’.”

“The United States continues to support and coordinate with Juan Guaido, but now there is frustration because he did not know how to unite the opposition The Trump administration is trying to get some progress on its side, “notes Mariano de Alba.

As the end of his term approaches, the US president is scrambling diplomatically to secure success. He negotiated the release of two American hostages in Yemen, announced a “peace agreement historic “between Israel and the United Arab Emirates and promised the withdrawal of Afghan troops and Iraq.

“It is a president who is in the immediate future, the rhythm of social networks. The traditional analysis grids do not apply to his decision-making. We should not seek ideological consistency in the positions of Donald Trump but shrapnel. He needs it before November 3, “notes Jean-Jacques Kourliandsky. “He wants victories like those in the Near and Middle East, such as his peace plan in the Israeli-Palestinian conflict that he has managed to get the countries of the region endorsed.”