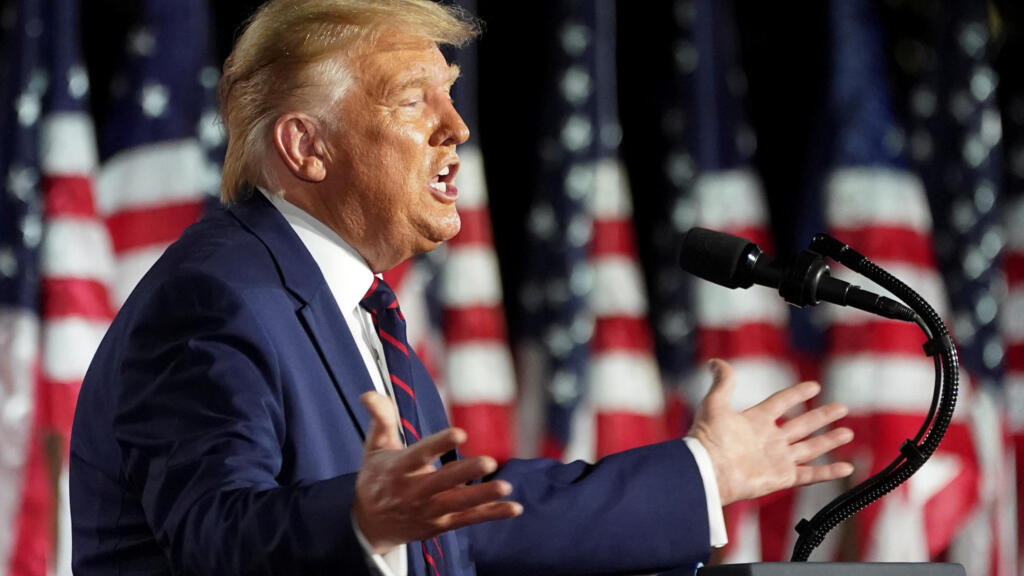 The American president accepted, Thursday evening from the White House, the nomination of the Republican Party to try to obtain a second mandate in November. In a speech lasting over an hour, he attacked his Democratic rival Joe Biden, described as a “Trojan horse of socialism”.

“Four more years!” The crowd gathered in the gardens of the White House on Thursday, August 27, were there to support their champion. Donald Trump has indeed chosen this federal building, the supreme symbol of the presidency, to accept the nomination of his party at the end of the fourth evening of the Republican convention. Unheard of for an American head of state, and a choice strongly criticized by the opposition which denounces an illegal mixture of genres.

But Donald Trump is no longer his first violation of the rules. He therefore took advantage of this unprecedented framework to deliver a long speech that looked like an indictment against Joe Biden, his Democratic competitor whose name he spoke 41 times in total. He also took care to repeat several statements from the latter in order to ridicule him.

While Joe Biden repeats over and over again that he is fighting “for the soul of America”, Donald Trump felt that he was “not the rescuer of the soul of America” ​​but ” America’s jobbreaker and, if allowed to be, America’s greatnessbreaker. ” The billionaire also mocked the Democrats’ insistence on describing their candidate as someone with empathy. “Workers who have lost their jobs do not want Joe Biden’s empathy, they want to find work,” he replied, considering his rival to be “weak”.

Last week, the former vice president used the metaphor of light and shadow at length to describe the race for the White House. “Joe Biden may say that he is an ally of the light, when it comes to his program, he wants to leave us all in the dark,” quipped Donald Trump.

The Republican has taken up at length a theme heard throughout the convention: Joe Biden, yet considered a moderate Democrat, would be a puppet of the radical left. It is a “Trojan horse of socialism”, he accused, seeing himself as its antithesis. “Never before have voters faced a clearer choice between two parties, two visions, two philosophies, or two programs,” he said. “This election will decide whether we save the American dream or whether we allow a socialist program to destroy our precious destiny.”

Donald Trump has mentioned China several times, assuring that Beijing wanted Joe Biden to win. “Biden’s program is made in China. Mine, in the United States,” he told the audience happily. He also continued to blame China for the coronavirus pandemic, while defending its handling of the health crisis. “In order to save as many lives as possible, we are focusing on science, facts and data,” he said. The approximately 1,500 supporters gathered in front of him, however, did not respect the physical distancing recommended by the health authorities and few wore a mask.

It is perhaps on the subject of security that the American president has been most incisive. He knows that it is a promising subject for the American suburbs of which he is courting the vote. Especially this week, after a new wave of violence following police fire against African-American Jacob Blake. “No one will be safe in Biden’s America,” he warned. “If the left wins, it will destroy the suburbs and seize your weapons,” he threatened.

It has been several months now – since the first riots after the death of George Floyd at the end of April – that the Republican campaign has insisted on this theme of “law and order”. And these efforts may have already started to pay off. Polls conducted in recent weeks – before the Jacob Blake episode therefore – show that support for the Black Lives Matter protests has eroded somewhat over time, especially in some key states such as Wisconsin. And Joe Biden’s lead narrowed slightly. Everything is still possible by November.

The Republicans understood that they could take advantage of the situation. Donald Trump’s advisor Kellyanne Conway declared that “the more chaos, lawlessness, vandalism and violence reign, the easier it is to choose who is the best in matters of public safety, law and order” .

In the street in front of the White House on Thursday evening, anti-racist demonstrators were protesting during Donald Trump’s speech. And on Friday, a big march is planned in Washington to commemorate the one during which, in 1963, Martin Luther King gave his famous “I have a dream” speech. Any overflows will obviously be closely scrutinized.

how to block access to certain websites from your pc?

In Mali, the French army kills more than 50 jihadists near the Burkina Faso border

Chad closes its borders after the death of President Idriss Déby

anger and concern in the cultural sector, forced to remain closed