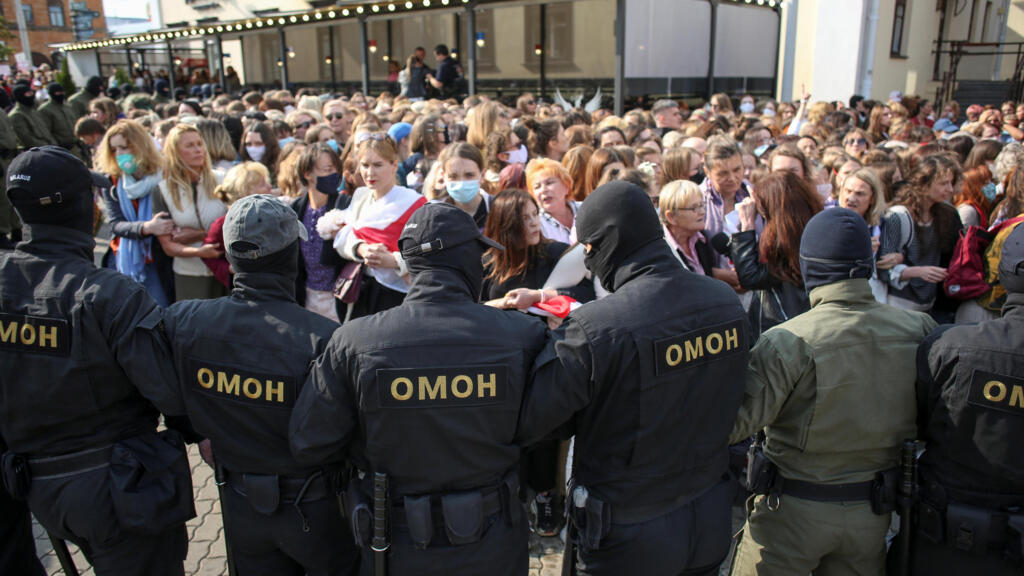 The Belarusian police carried out several dozen arrests on Saturday when thousands of people, mainly women, had gathered in Minsk, to demand, among other things, the release of one of the figures of the protest.

Anger does not fall in Belarus. Police brutally arrested several dozen demonstrators participating in a rally of thousands in the streets of Minsk on Saturday September 12 to protest against police violence and electoral fraud, according to local media.

Ahead of a mass protest expected on Sunday, a peaceful rally of women was held in central Minsk on Saturday. Some banged on saucepans with ladles, others chanted “Bring back our Macha”, referring to the diminutive ofone of the opposition leaders Maria Kolesnikova. The 38-year-old woman was jailed this week after resisting forced eviction by tearing up her passport.

Clashes broke out in the central square of Liberty, when masked and hooded men in black tried to arrest demonstrators who pushed them back, according to images broadcast by the television channel Belsat and the independent media Tut.by.

In another video, riot police brutally throw protesters into police vans. More than 40 people have been arrested, according to human rights group Viasna. Interior Ministry spokeswoman Olga Tchemodanova said “women have been arrested” without saying how many or providing further details.

Belsat, a Warsaw-based opposition television station, told the Telegram messaging app that two of its journalists covering the protest were also arrested.

The re-election on August 9 to the presidency of this former Soviet republic of Alexander Lukashenko, in power since 1994, with a score of 80%, gave rise to an unprecedented protest movement in Belarus, to denounce a fraudulent ballot.

All Belarusian opposition figures, often women, in this historic protest marked by record demonstrations every Sunday in Minsk, are today either in exile or in prison.

Challenged in the street for more than a month, Belarusian President Alexander Lukashenko will be in Russia on Monday to meet his counterpart Vladimir Poutine, the Kremlin affirming that “integration” of the two countries will be on the agenda.

Mink Oil For Baseball Gloves - Here's Why Not

the Netherlands scare each other, but dominate Ukraine on the wire

“This attack only increased my desire to teach!”

Bayern crush Barça and advance to the semi-finals