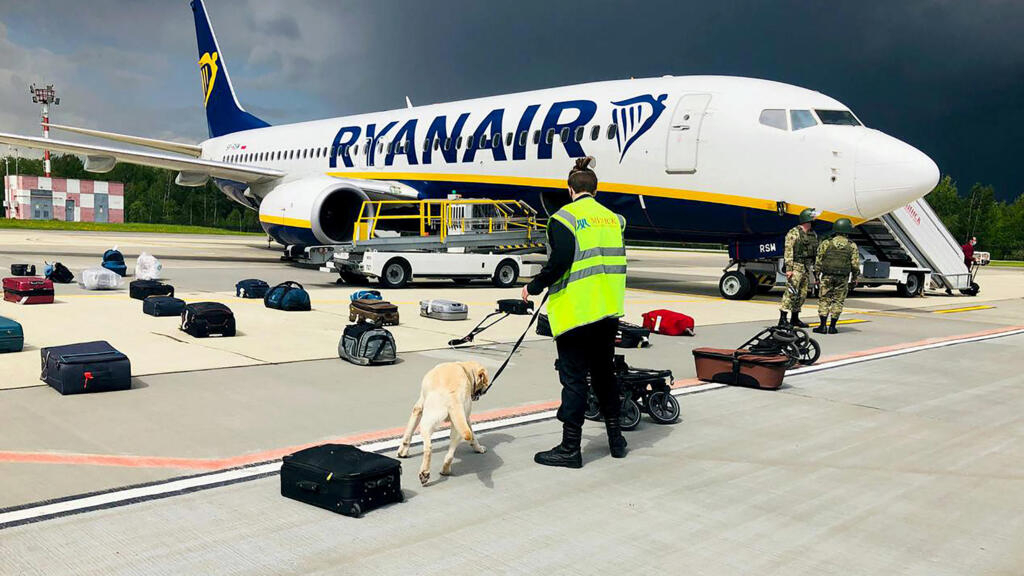 Irish Foreign Minister Simon Coveney on Monday denounced as an act of “state piracy” the hijacking by Belarus authorities the day before of a Ryanair plane, forced to land in Minsk, and the arrest of an opponent present on board. Meeting at a summit in Brussels, EU leaders are due to examine new sanctions against the authoritarian regime in Minsk on Monday evening, while Belarus for its part ensures that it acted legally after a bomb threat.

In the aftermath of theinterception of a commercial flight of the Irish company Ryanair, forced to land in Minsk, and the arrest of an opponent on board, the versions clash around this hijacking.

The Irish Minister for Foreign Affairs, Simon Coveney, denounced, Monday, May 24, as an act of “state piracy” this forced landing. “It was indeed state-sanctioned air piracy,” the chief diplomat told Irish public broadcaster RTE. “We cannot allow this incident to happen with warnings or strong press releases” as a response, he added, calling for “sanctions”.

KGB agents on board?

Belarusian security service (KGB) agents are suspected of being on the Ryanair plane, said Irish airline boss Michael O’Leary, also denouncing an act of “piracy”. supported by Belarus. “It appears that the intention of the authorities was to remove a journalist and the person who was traveling with him,” he explained on Irish radio Newstalk. “We believe that KGB agents were disembarked at the airport as well,” he added, referring to an incident “very frightening” for the passengers and the crew. “I think this is the first time this has happened to a European airline.”

For its part, the Belarus said Monday to have acted legally. “There is no doubt that the actions of our competent bodies were in accordance with international rules,” the Belarusian Foreign Ministry said on its website, rejecting the “baseless accusations” of European countries, accused of politicizing the incident. “It is from a security point of view (…) that this incident must be looked at,” he said, referring to the bomb threat which led to the landing in Minsk the Ryanair flight connecting Greece to Lithuania, two EU countries.

Russian diplomacy, for its part, considered the Western accusations against Belarus “shocking”. “It is shocking that the West considers the incident in Belarusian airspace to be ‘shocking’,” Russian Foreign Ministry spokeswoman Maria Zakharova quipped on Facebook, noting that states Westerners have in the past been guilty of “kidnappings, forced landings and illegal arrests.”

The EU was outraged by the voice of its high representative: the hijacking of a plane owned by a European Union company flying between two capitals of the European bloc is an “unacceptable measure”, denounced Monday Josep Borrell in a statement, adding that this measure would be discussed at the European summit. “The EU will examine the consequences of this action, including taking action against those responsible,” he said.

Meeting at a summit in Brussels, the heads of state and government of the EU are due to examine Monday evening new sanctions against the authoritarian regime in Minsk in reaction to this hijacking. About a hundred Belarusian officials, including the president Alexander Lukashenko, are already under European sanctions because of human rights abuses in this former Soviet republic.

On Sunday, the President of the European Commission, Ursula von der Leyen, had already indicated on Twitter that “the scandalous and illegal behavior of the government in Belarus will have consequences”.

The outrageous and illegal behavior of the regime in Belarus will have consequences.

Those responsible for the #Ryanair hijacking must be sanctioned.


On the NATO side, the ambassadors of member countries will meet on Tuesday. “The Allies are in the process of consulting on the forced landing of the Ryanair plane by Belarus and the ambassadors will discuss it tomorrow,” an official of the Atlantic Alliance told AFP.

The Belarusian ambassador in Paris, Igor Fissenko, was also summoned to the Quai d’Orsay on Sunday. French Foreign Minister Jean-Yves Le Drian previously denounced in a tweet an “unacceptable” act and called for a “firm and united response” from the EU.

The hijacking by the Belarusian authorities of a theft of @Ryanair unacceptable. A firm and united response from the Europeans is essential. All passengers on this flight, including any Belarusian opponents, must be allowed to leave without delay. # Belarus.


“We need actions, not words”

On Sunday evening, the Ryanair aircraft, which linked Greece to Lithuania, a Baltic country member of the European Union, was able to resume its flight, without Roman Protassevich.

Lithuania and Latvia have called on international flight operators to no longer pass through Belarusian airspace.

The leader of the Belarusian opposition, Svetlana Tikhanovskaïa, asked RTE for the “immediate” opening of an “international investigation”. According to her, “the escalation of violence in Belarus is the result of impunity, so we have to put a lot of pressure on the regime.”

“We need actions, not words. Mere words of condemnation are not enough,” insisted Franak Viacorka, journalist and friend of Roman Protassevich, on the BBC. He confided that the latter had expressed concerns to him before his departure to Athens airport, where he said he was followed.

“I can’t imagine what is happening to him right now,” he added. “His girlfriend was arrested with him. She is a Russian citizen (…) They will take revenge, punish them both.”

"The hardest part is not knowing": families of undocumented migrants, deprived of work accidents in the building industry

Haro on PFAS, these “eternal pollutants” and omnipresent