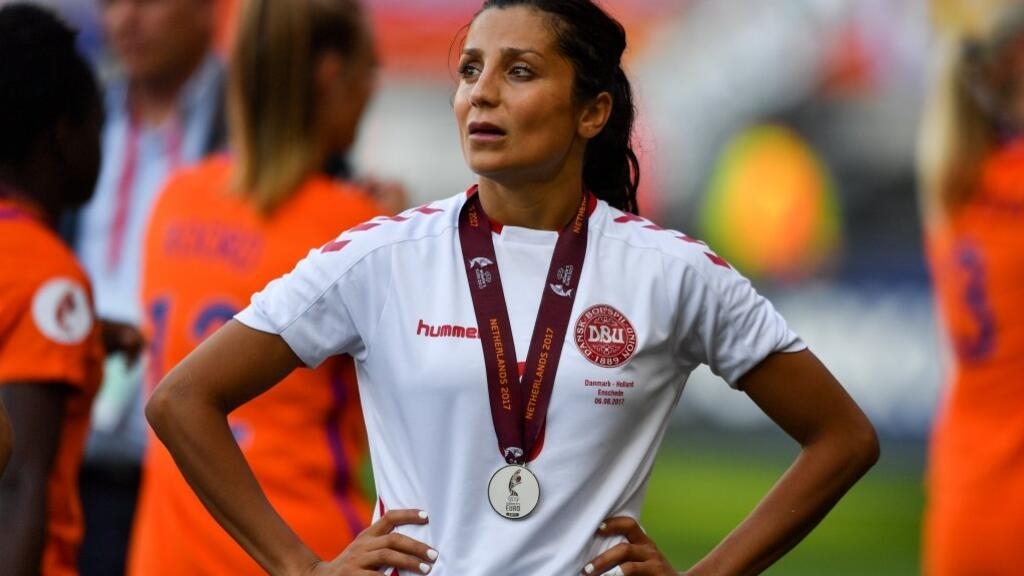 The PSG women’s team is counting this season on a striker with an atypical career, Nadia Nadim, whose family was forced to flee Afghanistan years ago. She is one of the weapons in attack of the Parisian formation which faces Olympique Lyonnais on Wednesday in the semi-final of the Champions League.

Nadia Nadim’s first football memory goes back to Afghanistan, in the family home with her children.
sisters. “It was our father who introduced us to football.
He gave us our first ball. We were playing in the courtyard of our
house out of sight “, told Nadia Nadim in
November 2019 in France 24, a few weeks after his arrival
in the Paris Saint-Germain (PSG) women’s team.

His father, General of the Army
Afghan, unfortunately could not attend the exploits of Nadia. “My father was assassinated by the Taliban
when they took power [en 1996]. That’s why with my mother
and my four sisters we decided to leave the country, at the
search for a better future “, explains the player
now 32 years old.

After stopping off in Pakistan,
Italy and England, they arrived in Europe and land their
suitcases in Denmark, in a refugee camp. Nadia Nadim then
ten years old and she nourishes a devouring passion for
soccer. His host country offers him the opportunity to practice
this sport and she signs her first license in a club in Aalborg,
in northern Denmark. “Suddenly there was no more
war. Everything was so normal, everyone was having fun
so much. I felt that the game brought so much joy to all
the players and that I really wanted to be part of them “, Nadia Nadim told InfoMigrants in 2019.

The great qualities and the
determination of this striker will allow her to turn professional. Then in 2009 she became the first player
of foreign origin to join the women’s national team,
a few months after obtaining a Danish passport. Spotted
across the Atlantic, she then played four seasons in the United States and then
returned to Europe in 2017, playing Manchester City before
join PSG at the start of the 2019/2020 season.

Throughout her career, Nadia
Nadim, who defines herself as a “citizen of the world”
on her Twitter account, is committed against racism and in favor of
women’s rights. It was also awarded in July
2019 the title of “champion
of UNESCO for the education of girls and women “, in
recognition in particular of “its role in promoting
sport and gender equality, its contribution to
UNESCO’s educational action in favor of young people “.
Nadia Nadim, also Ambassador of the Danish Refugee Council,
didn’t just shine on the football pitches:
she also began studying medicine in Denmark and
has been pursuing for several years in parallel with his career as
player with the aim of becoming a surgeon.

She recounted her journey from
refugee and detailed her commitments in an autobiography
published in 2018 in Denmark, “My life”, which will be available
in French at the beginning of next year. A difficult story
during which she was able to forge a solid character and acquire
a special place with her teammates. “She
wants to share this to make young players understand that this
that they do, it’s beautiful, for them to take
consciousness”, explained to France 24 his coach at PSG,
Olivier Echouafni.

Wednesday August 26, against Olympique Lyonnais
in the semi-finals of the Champions League, the experienced Nadia
Nadim will have a decisive role to play. Within the collective
Parisian who dreams of winning the first Champions League in
club. The women of PSG face their favorite rivals,
who notably stole this European title from them in 2017. And
Nadia Nadim, who likes to repeat “that she was lucky to have a
second chance “, hope to succeed in adding a new
line to an already well supplied track record.

Has Samsung changed the cooling system of its Galaxy Note 20?

NGOs warn about “the dangerous consequences for individual freedoms”

Diary Sow, Senegalese student who disappeared in France, says she is “fine” and “safe”

Elisabeth Borne, the Minister of Labor, hospitalized after being contaminated by Covid-19