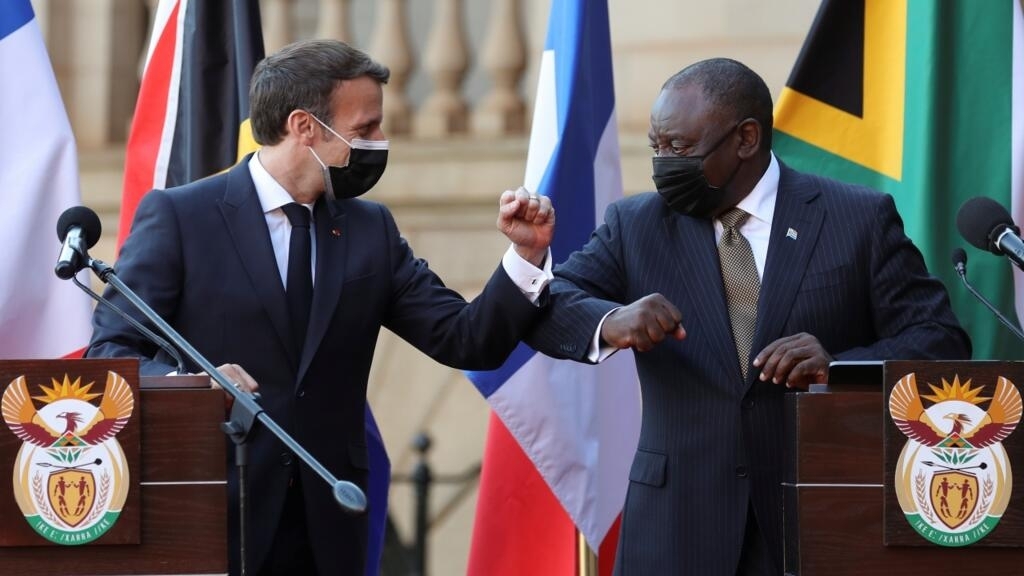 Visiting South Africa, Emmanuel Macron said he was in favor of temporarily lifting the patents of anti-Covid vaccines to allow production technology transfers to poor countries. A stance applauded by Pretoria.

Patents on anti-Covid-19 “should in no way be a brake” on the immunization of populations, said French President Emmanuel Macron during a visit, Friday, May 28, to Pretoria, in South Africa, in the wake of his trip to Rwanda. A position applauded by the South African president who denounced a “vaccine apartheid” and who campaigns for each country to be able to produce doses.

The French president supported the solution of “exemptions” on patents, on the model of those decided for anti-AIDS treatments, which allow countries in crisis to manufacture cheaper generic drugs. But “we are not able to put in place these exemptions” at the World Trade Organization (WTO) for the Covid, recognized Emmanuel Macron.

“I am pragmatic,” he continued, “if it becomes clear that this cannot work, President Ramaphosa is proposing something that can be done in parallel, and I will support him, it is a” waiver “, that is to say a lifting of intellectual property rules on all Covid vaccines during the crisis”.

“Under no circumstances can intellectual property stand in the way of technology transfer,” he said. “We have also decided together to bring a common initiative on this subject to the G7” in June, announced the French president.

>> To read: The lifting of patents, a long obstacle course

The French president recalled that his objective was to set up, first of all, rapid technology transfers to install vaccine production capacities in Africa as quickly as possible. He was also to announce in the afternoon investment agreements, in particular with the South African laboratory Aspen.

South Africa and India are leading a campaign to renounce intellectual property rights to coronavirus vaccines, so that each country can produce doses. This rallying to the “waiver” demanded by India and South Africa constitutes an evolution of the French position on anti-Covid vaccine patents.

Again Thursday, before an economic forum organized by the magazine Challenges, Emmanuel Macron defended the solution of exemptions on anti-AIDS triple therapy models, by “continuing to have the right remuneration for innovation”.

This position “is music to my ears,” said the South African president. “But the establishment of production capacities, and not just the issue of patents, could allow technology transfers”, added Cyril Ramaphosa.

“We want to convince more and more countries of the correctness of our position”, he said, the production of its own vaccines “will be a game-changer for Africa” ​​concluded the South African president.

Officially the most affected in Africa, the country which now faces an imminent third wave of the pandemic and officially counts more than 1.6 million cases for more than 56 000 dead.

Lagging behind the rest of the world, South Africa has vaccinated just 1% of its population of 59 million people and its campaign to immunize the elderly only started last week.

“The real challenge we face is the unavailability of vaccines. Well-endowed countries have bought them and are stocking them. We are now stuck,” said Cyril Ramaphosa.

“Only a few receive unlimited vaccines” while in Africa, only 2% of the population is now protected, asserted the South African president, again deploring a “vaccine apartheid”.

Africa represents 20% of needs, but only 1% of production and 2% of people vaccinated. The continent has more than 4.7 million cases, for nearly 130,000 deaths.

Citizen, the app that plays on the fear of citizens in the United States

Brazil returns above 1,000 deaths per day

seven EU countries, including Spain, in a worrying health situation