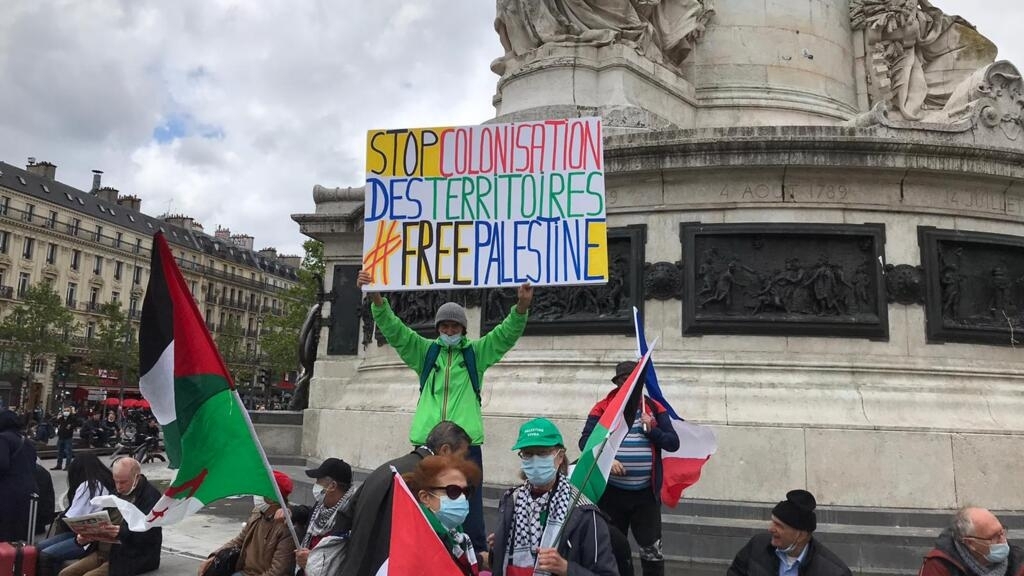 In the aftermath of demonstrations that brought together several thousand people across France, a new rally took place on Sunday at Place de la République in Paris at the call of pro-Palestinian groups. The demonstrators notably denounced the attitude of France, considered too conciliatory with the government of Benjamin Netanyahu.

“Free Palestine” t-shirt and keffiyeh around his neck, Thomas, has been featured in all the demonstrations in recent weeks in Paris. “It had been a long time since we heard about the Palestinian cause. I would like to have demonstrations every weekend! We must not let go “, launches the young man of 24 years.

Around him, dozens of flags in the colors of palestine start to stir in a Place de la République cordoned off by riot trucks and security barriers.

“Criminal Netanyahu,” “Stop colonization of the territories,” reads a sign as a little further away a young woman holds up a photo of a Palestinian child victim of a bombardment.

Many of the protesters also attended the rally the previous weekend, banned by the Paris police headquarters for fear of overflows.

“It disgusted me,” protested Frikia, 69. “In every country in the world, have there been authorized demonstrations in support of the Palestinian people but not in France? It’s still unbelievable. In my opinion, France is an accomplice of Israel.”

“We want to break the silence of Western countries so that they come to help the Palestinians. Macron does not say anything, it is not normal”, assures Sanah.

“Netanyahu is supported by everyone,” Thomas also laments. “By France, the United States but also by certain Arab countries.”

>> To see on France 24: Israeli-Palestinian conflict: after the end of the fighting, the time has come for reconstruction

“The ceasefire? I don’t really believe it”

Whilea ceasefire went into effect on Friday, after 11 days of deadly fighting between Israel and Hamas, protesters worry about renewed fighting in Gaza.

Cathy, 34, from Meaux with her two children, recalls that other truces have already been shattered during previous armed conflicts that have ravaged the Israeli blockaded enclave.

“There have always been ceasefires but it started again, so I don’t personally believe in them,” she explains. “We are not against the Israelis but against the State of Israel which wants to take over Palestine. I understand that it is against Hamas but it has killed a lot of innocent people.”

>> To see on France 24: In the streets of Gaza, an unprecedented show of force by Hamas

“Western countries condemn Hamas rockets, but Hamas is not all of Palestine! The Israeli military has deliberately targeted civilians,” Frikia also accuses.

“It’s unfair what’s going on there,” says 20-year-old Myriam. “Children are dying, this has to stop,” the young woman concludes, glancing at her little brother sleeping peacefully in his stroller.

At the end of 11 days of conflict, at least 260 people lost their lives. The ministry of health in Gaza counts 230 victims, for more than half of the women and the children, as well as 58,000 displaced. There are 12 dead on the Israeli side, including a child, a teenage girl and a soldier.

The UN on Sunday called for a long-term reconstruction of the Gaza Strip by addressing the “root causes” of the Israeli-Palestinian conflict, in order to restore “hope” and avoid further “destruction”.

return to an almost "normal" life in Tel Aviv

Zlatan Ibrahimovic extends contract with AC Milan for one year

a coalition will submit the candidacy of Laurent Gbagbo

Germany crosses the one million mark