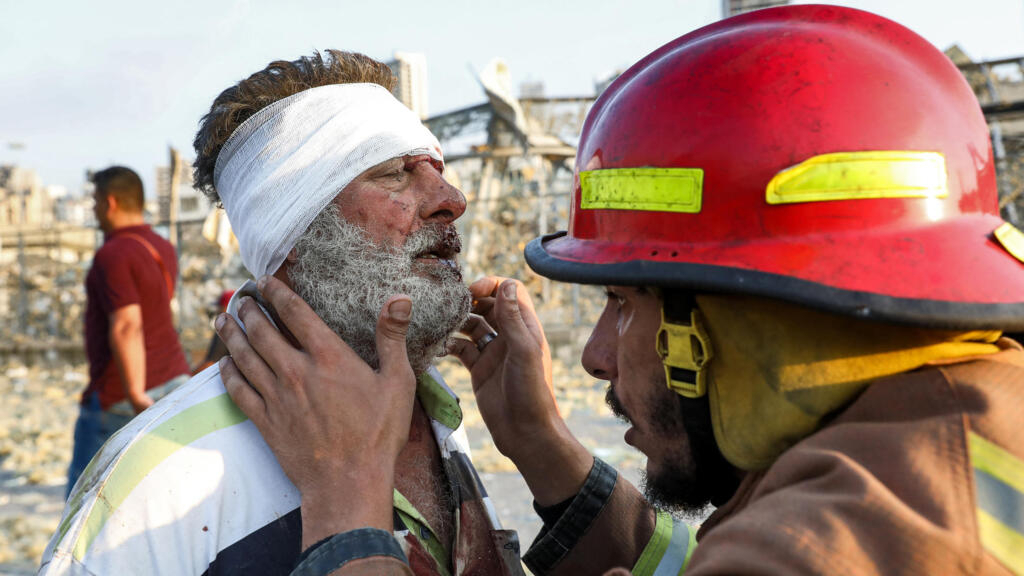 France declared on Tuesday evening to stand alongside “Lebanon”, announcing the delivery of “aid and resources” to Beirut, after strong explosions which killed at least 50 people. The United Kingdom, Iran but also Israel have offered their assistance.

International reactions are linked after the explosions, which rocked the port of Beirut on Tuesday, August 4. The balance sheet keeps increasing and outstretched hands have multiplied, long before the appeal for help launched by Lebanese Prime Minister Hassan Diab to “friendly countries”.

“I express my fraternal solidarity with the Lebanese after the explosion which caused so many victims and damage this evening in Beirut. France stands alongside Lebanon. Always,” French President Emmanuel Macron reacted on Twitter.

I express my fraternal solidarity with the Lebanese after the explosion which claimed so many victims and damages this evening in Beirut. France stands alongside Lebanon. Always. French aid and resources are being delivered to the site.

“French aid and resources are being dispatched on the spot,” added the President of the Republic, shortly after a first reaction from Foreign Minister Jean-Yves Le Drian. “While Beirut has just been hit hard by explosions, France offers its condolences to the families of the victims and wishes a speedy recovery to the many injured”, reacted Jean-Yves Le Drian, in a tweet.

The UK and Israel have also offered assistance in the land of the Cedars. The United States has indicated that it is monitoring developments

The pictures and videos from Beirut tonight are shocking. All of my thoughts and prayers are with those caught up in this terrible incident. The UK is ready to provide support in any way we can, including to those British nationals affected.

“Our thoughts and prayers are with the great and resilient people of Lebanon,” the Iranian minister tweeted. “As always, Iran is fully available to provide assistance in any way necessary,” he said. he said, calling on Lebanon to “stay strong”.

Our thoughts and prayers are with the great and resilient people of Lebanon.

As always, Iran is fully prepared to render assistance in any way necessary.

As rumors and disinformation blamed Israel for detonations in Beirut port, Israeli official speaking on condition of anonymity assured Hebrew state had “nothing to do with this incident “.

In a joint statement between Foreign Minister Gabi Ashkenazi and Defense Minister Benny Gantz, the latter said Israel had come closer to Lebanon to “offer the Lebanese medical and humanitarian assistance”.

The United States has said it is monitoring the situation closely and the US State Department stands ready to offer any necessary assistance to the Lebanese.

Gulf countries, some of which have close ties with Lebanon by providing financial assistance, paid tribute to the victims.

The Emir of Qatar, Sheikh Tamim bin Hamad Al-Thani, called on President Aoun to offer his condolences, according to the official QNA news agency, which added that field hospitals would be sent to Lebanon.

“Our hearts are with Beirut and its people,” tweeted UAE Foreign Minister Anwar Gargash, posting a photo of the famous Burj Khalifa in Dubai, illuminated with the colors of the Lebanese flag.

“May God (…) protect brother Lebanon and the Lebanese to reduce their suffering and heal their wounds”, he said.

Kuwait has announced that it will send emergency medical aid to Lebanon, according to the official Kuna agency. Jordanian Foreign Minister called on his counterpart Charbel Wehbe to express his solidarity, saying he was ready to offer any assistance to Lebanon.

Arab League leader Ahmed Aboul Gheit stressed the “importance of finding the truth in the explosions and those who caused them.”

They “will unfortunately exacerbate Lebanon’s difficulties and increase the gravity of the crisis (…) the country is experiencing”, he added.