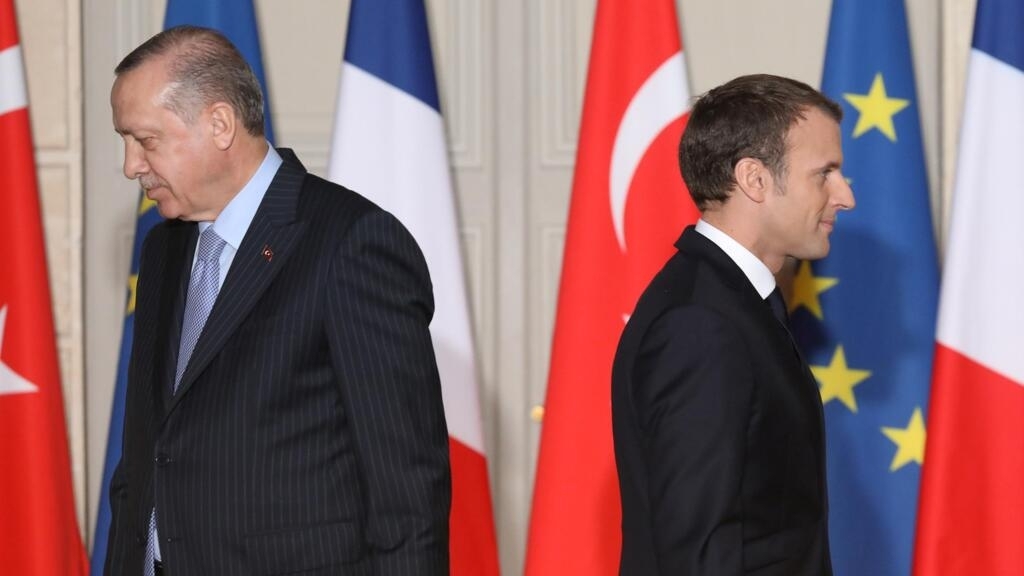 Recep Tayyip Erdogan’s invective did not pass in the dramatic context of the assassination of Samuel Paty. Emmanuel Macron replied strongly on Saturday to the new attacks by his Turkish counterpart and recalled the French ambassador to Paris, a rare diplomatic act.

New revival of tension between the French president and his Turkish counterpart : Emmanuel Macron decided, Saturday, October 24, to recall the French ambassador to Turkey. This rare diplomatic act comes after Recep Tayyip Erdogan called into question the French president’s “sanity” because of his attitude towards Muslims, against a backdrop of dramatic backdrop with the assassination of Samuel Paty.

The Elysee denounced to AFP the remarks deemed “unacceptable” by the Turkish president, but also noted “the absence of messages of condolence and support from the Turkish President after the assassination of Samuel Paty”, a week later the beheading of the teacher by an Islamist near Paris.

The French wrath is reflected in the immediate recall of the French ambassador to Ankara, it seems for the first time in the history of Franco-Turkish diplomatic relations. The act, says the entourage of Emmanuel Macron, is “a very strong signal”.

The previous recall to Paris of a French ambassador “in consultation”, as the saying goes, dates back to February 2019, to protest against a meeting between Luigi di Maio, then Italian vice-prime minister, and yellow vests.

Last November, the Turkish president had already questioned the mental health of Emmanuel Macron, replying to the French president’s remarks on NATO’s “brain death” by inviting him to “examine his own brain death”. “Insults and provocations from Erdogan, we have had almost every week this summer,” we admitted on Saturday in the entourage of President Macron. What would change this time is “the context”.

At the international level, it is stressed, “the lines have shifted. We have awakened the European partners to the risk posed by Erdogan” in the eastern Mediterranean, in the conflict between Azerbaijan and Armenia, in Libya or even in Syria.

In France especially, the Conflans Sainte-Honorine attack led the executive to step up the initiative already underway against political Islam, arousing the anger of the Turkish Islamo-conservative leader.

Two weeks ago, Recep Tayyip Erdogan denounced as a provocation the statements of his French counterpart on “Islamist separatism” and the need to “structure Islam” in France, while the executive presented its future bill on this theme.

He hammered home the point on Saturday in a televised speech: “All that can be said about a head of state who treats millions of members of different religious communities in this way is: go and do mental health examinations “.

For the Élysée, Ankara’s “excess and rudeness” pass less than ever, two days after the ceremony of homage to Samuel Paty at the Sorbonne.

In his speech Thursday evening, Emmanuel Macron had notably promised that France would continue to defend the cartoons. Since then, according to the president’s entourage, “the Turks have been disseminating a sort of absurd propaganda, for example that the president has decided to project the caricatures of Mohammed on public buildings”.

Calls to boycott French products have multiplied, on the other hand, since Friday in several Arab countries in reaction to the presidential speech at the Sorbonne. In the eyes of Paris, “there is an Islamist campaign against France. It is organized, it is no accident, and the transmitters are very largely Turkish”.

Basically, tensions in the Mediterranean to the conflict in Libya, through the clashes in Nagorno-Karabakh, many issues currently oppose Paris and Ankara.

The Élysée again demanded on Saturday “that Turkey put an end to its dangerous adventures in the Mediterranean and in the region”, and denounced the “irresponsible behavior” of Ankara in Nagorno-Karabakh.

“Requirements are being asked. Erdogan has two months to respond. Measures will have to be taken at the end of this year,” said the Elysee with regard to the eastern Mediterranean.