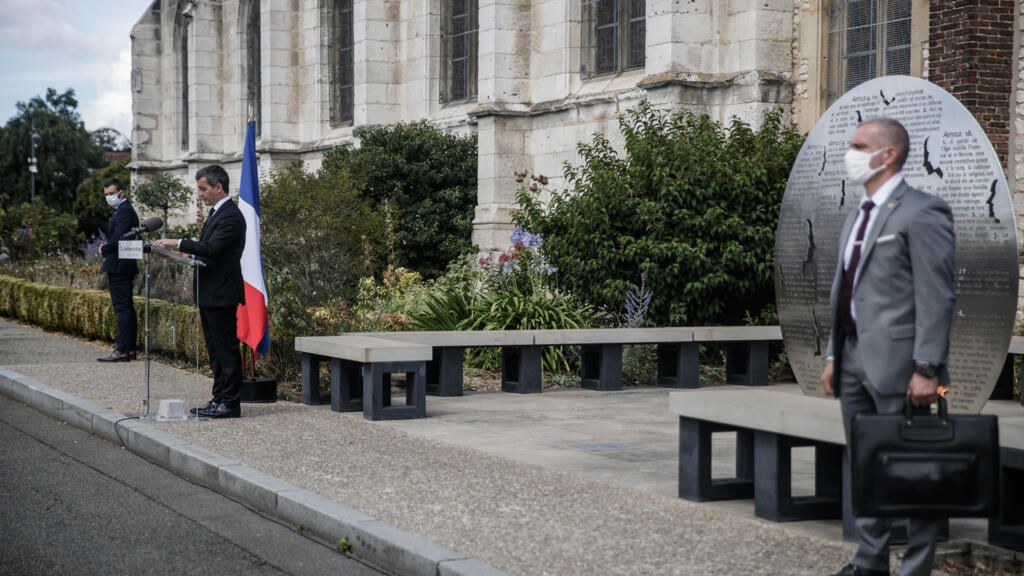 Eleven people were arrested on Sunday on the sidelines of Gérald Darmanin’s trip to Saint-Étienne-du-Rouvray, said the Seine-Maritime prefecture. The Minister of the Interior was insulted during the tributes to Father Hamel, assassinated four years ago in this city.

The ceremony of homage to Father Hamel, assassinated four years ago in Saint-Étienne-du-Rouvray, which was attended the Minister of the Interior Gérald Darmanin Sunday July 26, was heckled. “Eleven people were arrested and interviewed, four are in custody for contempt, and all are fined for prohibited demonstration,” said the prefecture of Seine-Maritime.

In full speech, the words “Darmanin, dirty rapist” were uttered by one or more individuals, we learned from a source close to the case. The Minister of the Interior, since he was appointed at the beginning of July Place Beauvau, Is in particular the target of feminist associations.

According to the prefecture, the area where the tributes took place was not closed. “Even though there was a ban on demonstrations, the area was open to the public,” she recalled.

The people who “arrested the minister were exfiltrated”. They are “known for belonging to the yellow vests and ultra-left movement”, and the words uttered are not the fact of feminists, the same source specifies.

The prefecture nevertheless recalls “that it is scandalous to take advantage of a ceremony of meditation” to commit this type of event.

“Vow of hope of republican fraternity”

In his speech on Sunday, Gérald Darmanin paid tribute to Father Hamel “who died under the blows of the most infamous and blind barbarism”. His assassination “did not affect only Christians. He touched all of France in his heart and in his mind,” said the minister.

“To kill a priest (…) is to attempt to assassinate part of the national soul”, underlined Gérald Darmanin.

“Four years later, we remember his action. Of this drama. And we do not forget”, also said the Minister of the Interior, wishing that the life and death of the priest could “be at the same time a example for those who believe and a vow of hope of republican fraternity for all “.

July 26, 2016 Father Jacques Hamel, priest of Saint-Étienne-du-Rouvray, had been slaughtered in his church by two jihadists, Abdel Malik Petitjean and Adel Kermiche, who had been killed by the police. The assassination was claimed by the Islamic State organization.