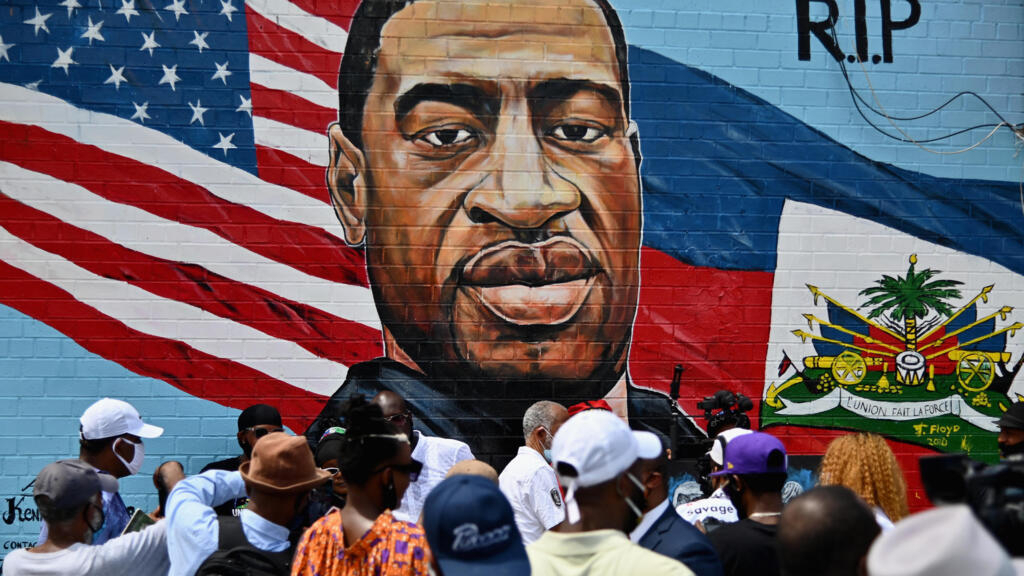 Almost a year after George Floyd’s death, the Black Lives Matter movement has enabled the United States to face the issue of racism. Joe Biden and his vice-president, Kamala Harris, have also pledged to tackle a scourge they deem “systemic.”

Between 15 and 26 million demonstrators across the United States, rallies in more than 2,500 cities and several months of protest: the day after the death of George Floyd, on May 25, 2020 in Minneapolis, the movement against racism and police violence Black Lives Matter has become, in just a few weeks, one of the most important in the country’s history. Nine months later and while this week is due to open the trial of Derek Chauvin, the policeman who killed George Floyd, American society is moving slowly.

“Black Lives Matter made it possible to pose the debate and to move things forward, the choice of Kamala Harris for the vice-presidency being the first illustration”, judge Jean-Éric Branaa, specialist of the United States and lecturer at Paris 2 Panthéon-Assas University, contacted by France 24. “Joe Biden had always said he would choose a woman, but the protests pushed him to opt for an African-American. However, Kamala Harris is not anyone: his parents helped start the civil rights movement at UC Berkeley. “

>> To see: “In pictures: massive mobilization against racism across the planet”

Beyond a symbolic choice that contrasts with an outgoing president, Donald Trump, who had never ceased to divide Americans on the theme of “law and order”, candidate Joe Biden shows that he intends to seize the subject and speak quickly of “systemic racism” in the United States. A phrase he continues to use as President of the United States.

But the most concrete step forward is the adoption by the House of Representatives on March 4 of the police reform bill. Called the “George Floyd Justice in Policing Act”, this reform provides, among other things, to prohibit strangulation, to limit transfers of military equipment to the police and to create a national register of dismissed police officers to abuse.

The fear of a Rodney King judgment

The reform bill also attacks the broad immunity enjoyed by the police in civil proceedings. It also provides for the end, for drug offenses, of search warrants allowing officers to enter suspects without knocking.

The text, which is now to be voted on in the Senate, “will not erase centuries of systemic racism” in the United States, Democratic House Speaker Nancy Pelosi said ahead of its passage. But it will be “a huge step” towards “building a better, healthier relationship between the police and the communities they respect.”

>> To read also: “The death of George Floyd marks ‘the end of the illusions born with the election of Barack Obama'”

No question, on the other hand, of cutting net in the budgets of the police force, as demanded many demonstrators with the slogan “Defund the Police”. The text voted on last week in Congress makes no reference to it. And locally, some cities that had ventured into this terrain have backed down. The Minneapolis City Council, where George Floyd died, announced on June 7 that it would dismantle its police force. In the end, it only suffered a decrease of $ 8 million on a budget of $ 179 million. In New York, the billion dollar cuts to the police budget, decided in June, have finally been significantly reduced and spread over time.

“The outcome of the trial will have important consequences, predicts Jean-Éric Branaa. Everyone’s fear is that it will end like Rodney King [l’acquittement en 1992 de quatre policiers ayant tabassé un an plus tôt cet Afro-Américain à Los Angeles avait provoqué des émeutes sans précédent]. The Floyd case has become utterly emblematic of the unfinished struggle for civil rights. However, for the black community, the fight for equality today involves a conviction of Derek Chauvin. “

Especially since on the ground, the situation has not changed: a thousand people died again under the bullets of the police in 2020, including 28% of African-Americans, whereas they represent only 12% Population. And justice has given up on prosecuting agents responsible for the deaths of unarmed African Americans, such as Breonna Taylor, shot dead in her Kentucky apartment, or Daniel Prude, suffocated during a psychotic crisis near New York. So did the officer who shot seven times point blank at Jacob Blake, who did not succumb to his injuries, in Wisconsin.

Joe Biden is therefore expected at the turn. For part of the white community, George Floyd’s death marked “the end of the illusions that arose with the election of Barack Obama in 2008, when we spoke of America “post-racial” and “colorblind”, analyzed in June the historian of the United States Romain Huret, interviewed by France 24.

>> To read also: “In eight years in office, what has Obama done to ease racial tensions?”

However, Barack Obama had always presented himself as the president of all Americans, thus refusing to become the one who would take up the fight against racism in the United States. “Today, the context has changed, notes Jean-Éric Branaa. The Americans who voted for Joe Biden expect strong actions from him. And since he is both white and old, and that he clearly left hearing he wouldn’t run for a second term, he can afford to do whatever he wants without worrying about his popularity. “

“It’s time to act because faith and morals dictate it,” because racism is “corrosive, destructive and costly” to the United States, Jan. 26 said on 46e President of the United States when signing several decrees to combat racism.

In the European Parliament, the Hungarian party of Viktor Orban leaves the PPE group