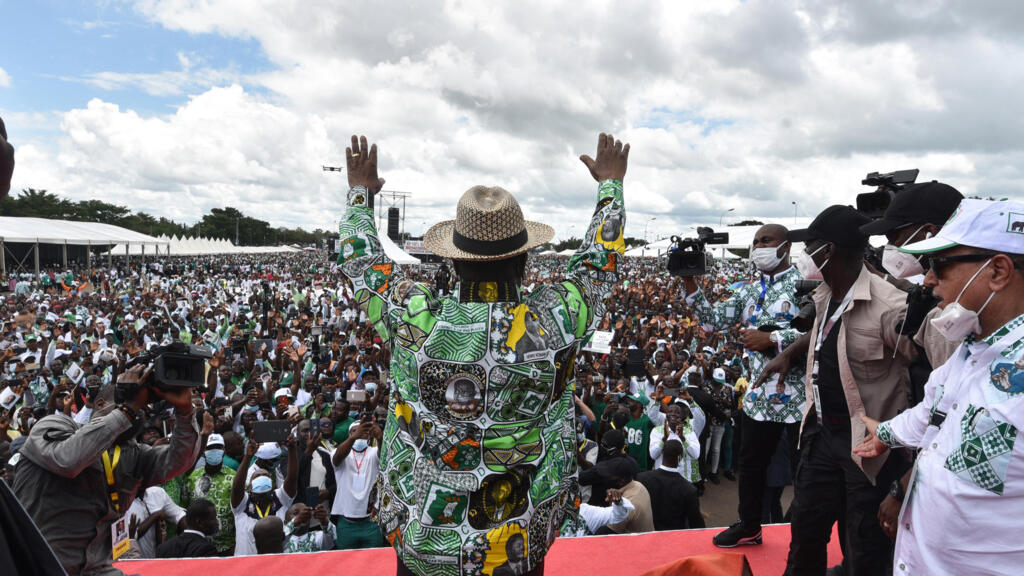 Officially invested by his party on Saturday, ex-President Henri Konan Bédié called for the Ivorian opposition to unite at a meeting in Yamoussoukro. The “Daoukro Sphinx” aims to return to power, more than twenty years after being overthrown in a coup, if possible with the help of Laurent Gbagbo and Guillaume Soro.

Rally the Ivorian opposition around his candidacy, such seemed to be the ambition ofHenri Konan Bédié for his official investiture by his party, Saturday September 12. On this occasion, the former president (1993-1999) and leader of the Democratic Party of Côte d’Ivoire (PDCI) spoke at a meeting that brought together tens of thousands of activists in Yamoussoukro, the hometown by Félix Houphouët-Boigny – President of the Republic from 1960 to 1993, founder of the PDCI… and mentor of “HKB”, who claims his succession.

The “Sphinx of Daoukro” also formulated this promise in the event of success in the presidential election: “I commit myself from my accession to the supreme magistracy, to set up a government of wide openness, federating all political formations and forces social groups who so desire and to take concrete and immediate measures for the unconditional return of all exiles, the release of all political, civilian and military prisoners from the post-electoral crisis of 2010 to the present day “.

A rallying message to, among others, ex-president Laurent Gbagbo and ex-rebel leader and former prime minister, Guillaume Soro. These two heavyweights of Ivorian politics are both exiled, respectively in Belgium and in France. And on Saturday, delegations from their respective parties, the Ivorian Popular Front and Generations and Peoples in Solidarity, were present in the assembly.

Gbagbo and Soro struck off the lists, Ouattara’s candidacy contested

Laurent Gbagbo and Guillaume Soro saw relatives submit their respective candidatures for the presidential election at the end of August. They have, however, little chance of success. : one was sentenced for the so-called “BCEAO robbery” affair, the other for “concealment of embezzlement of public funds”, which led to them being struck off the electoral lists on August 22 by the Independent Electoral Commission (CEI).

The Ivorian Constitutional Council, which is due to rule and publish the list of validated candidatures for the next presidential election this week, should follow the path of the CEI and invalidate these two candidacies, according to judicial sources contacted by AFP.

>> To see and read on France 24: Ivory Coast: can the candidatures of Laurent Gbagbo and Guillaume Soro succeed?

This situation could benefit the candidacy of Henri Konan Bédié, determined to rally the Ivorian opposition.

At 86 – an age that earned him criticism but which he considers “an asset” for the presidential function -, “HKB” aims to gain the upper hand over the outgoing president, Alassane Ouattara, with whom he has been in political rupture since 2018. “He wants his revenge on Ouattara, whom he supported [en 2010], But which has not, according to him, respected his commitment to give back power to the PDCI in 2020. He does not want to remain in history as the one who lost the power of the PDCI d’Houphouët “, estimated in July 2020 an observer of Ivorian political life.

The fact that Alassane Ouattara is running for a third consecutive term – which is the subject of a legal dispute – only added tension. “Ouattara’s third term would be illegal [selon la Constitution ivoirienne]”, affirmed Henri Konan Bédié in an interview given in July to France 24.

Like the previous one, the Ivorian Constitution of 2016 limits the number of presidential terms to two. But supporters of Alassane Ouattara claim that the change of the Constitution has reset the counter to zero. The announcement of his candidacy sparked protests that degenerated into violence causing several deaths in August.

And a few weeks before a presidential election that promises to be under high tension, the specter of a scenario similar to the presidential election of 2010. The post-electoral crisis, where the then president, Laurent Gbagbo, refused to recognize his defeat against Alassane Ouattara, had killed 3,000.