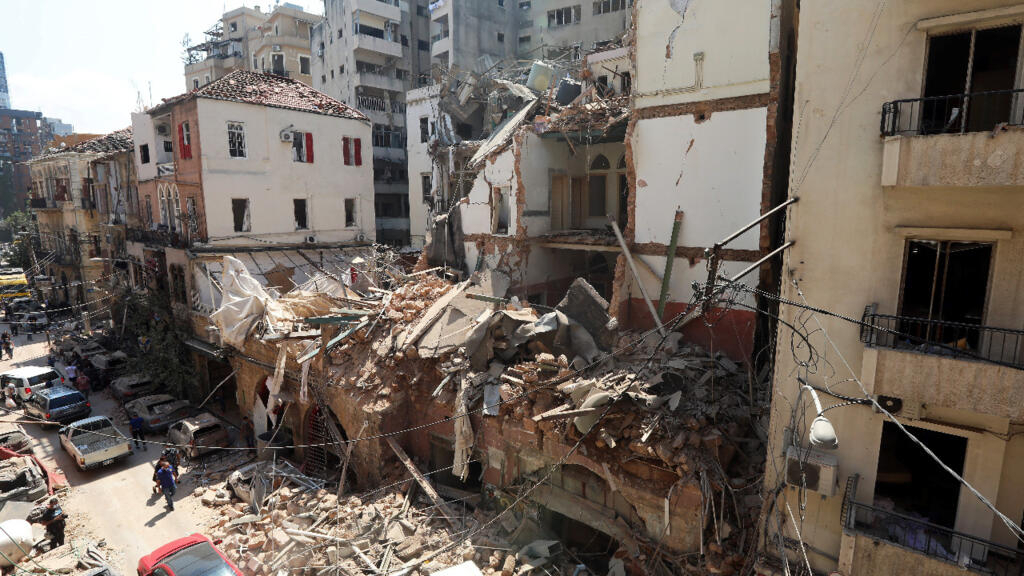 In the aftermath of the double explosion in the port of Beirut, the capital of Lebanon is devastated. The Lebanese are reeling from a tragedy seen as too much for a country already very weakened by a serious economic, political and health crisis.

Heavy human toll, apocalyptic scenes, monster destruction … Lebanon woke up groggy, still in shock gigantic explosions that occurred on Tuesday August 4 in the port of Beirut. The disaster that shook the land of the Cedars left more than 100 dead and 4,000 injured, and hit several neighborhoods bordering the capital hard.

Bereaved, the Lebanese will have to heal their wounds for the umpteenth time and take another shock. The country is plunged in an acute economic crisis, the national currency is in free fall, the impoverishment of the population is accelerating. Not to mention the Covid-19 pandemic, which made a situation worse, which is beyond the control of a government contested in the street and accused of being corrupt and incompetent.

“We needed nothing more than that, while the Lebanese are demoralized and at the end of their rope … Everything imploded yesterday, a bit like the country for some time, says Fadi, a civil engineer contacted by France 24 , which was thrown a meter into his apartment at the time of the explosion.With all the crises that hit us at the same time we thought we had hit rock bottom but with this explosion we wonder when this dramatic spiral will take end”.

“Beirut is destroyed, my heart is devastated”

Stunned by this new tragedy, the Lebanese discovered, Wednesday morning, a bruised capital. The damage extended over a radius of several kilometers around the port, which itself was almost completely razed. In the heart of Beirut, homes have been devastated and windows blown. The cataclysmic power of the explosion even caused the total or partial collapse of some buildings.

“It is as if an earthquake has struck the whole of Lebanon and its capital,” said Beirut City Council chairman Jamal Itani.

In some hard-hit areas of the capital, such as Achrafiyé, Dora, or Gemmayzé and Mar Mikhael, usually very popular with night owls, the streets are littered with debris and crushed cars. The extent of the damage and the desolation that reign there recall scenes of war (1975-1990) still vivid in Lebanese memories.

“We did not sleep all night. Our accommodation is damaged, we no longer have a door, no window, we are only crying. We cannot do anything else, tells France 24 Maya, a Beirut lawyer My city, the city of my childhood and my children, has been blown away, innocent people have died. I have never experienced such a shock and yet I have lived through war. Beirut is destroyed, my heart is devastated “.

The businesses in the city center, rebuilt after the end of the Lebanon war and located a few kilometers from the port, were also severely hit by the blast of the explosion. The blast, described as “Beirutshima” by local media, in reference to the nuclear attack on Hiroshima, also caused material damage in the inner suburbs of Beirut, more than 10 kilometers from the port.

Beirut Governor Marwan Aboud said 300,000 of the capital’s two million inhabitants are now homeless as a result of the blast, which “destroyed or affected nearly half the city”. According to him, the damage could amount to “between three and five billion dollars”.

While rescuers are still trying to find victims among the debris of the port, And that many people are still missing, the human toll of the double explosion, caused, according to the authorities, by the explosion of a warehouse containing 2,750 tonnes of ammonium nitrate, May get heavier.

Photo sent by a nurse from Saint Georges Hospital in central Beirut. The hospital entrance hall was blown up in the explosion. pic.twitter.com/JKE3DyGljE

Hospitals in the capital, some of which were affected by the explosion, and already under pressure because of the Covid-19 and lack of equipment due to the economic crisis, were forced to redirect a number of victims to hospitals in the suburbs and in more remote areas.

“We are facing, and this is the first time in decades, a catastrophe of exceptional magnitude,” Lebanese Red Cross secretary general George Kettaneh told France 24.

“Our legendary capacity for resilience is almost exhausted”

The Lebanese already fear the social and economic consequences of this tragedy in this country which displays an abysmal debt. All the more so as the port of Beirut, the main entry point for a country that imports 80% of its needs, whether for agricultural or agro-industrial products, risks remaining paralyzed for a long time. The United Nations Food and Agriculture Agency, the FAO, said it fears a short-term problem of the availability of flour for Lebanon, grain silos installed near the port having been gutted and destroyed.

“The catastrophes follow one another for Lebanon, the descent into hell continues. Who can bear such a curse, such a succession of misfortunes? Our legendary capacity for resilience is almost exhausted. It is over, there remains only despair. “, Explains Fadi. Describing himself as a patriot in love with his country, he confides in seriously considering emigrating with his family.” We can no longer live in Lebanon, it has become impossible. We are in for survival “.

Since Tuesday, many countries have offered aid to Lebanon, including the United States, Iran and some Arab countries such as Qatar. For its part, the European Union is going to send around 100 specialized firefighters to Beirut to help research and is ready to mobilize additional aid, the European commissioner in charge of crisis management announced on Tuesday.

I will go to Beirut tomorrow to meet the Lebanese people to bring them the message of fraternity and solidarity of the French. We will take stock of the situation with the political authorities.

France, which has historic relations with the country of the Cedars, will send a detachment of civil security and “several tons of sanitary equipment”, announced President Emmanuel Macron on Twitter. The Élysée also announced that the Head of State will travel to Lebanon on Thursday to “meet all the political players”.

“This is unheard of in the country even in times of war. This tragedy comes at the worst time, while the government does not respond to the demands of the people, who have been demonstrating against the government since October, underlines Ziad Baroud, former Minister of the Interior, interviewed by France 24. The tragedy is immense but what is distressing is that we are in the midst of an economic and health crisis.The population will therefore have to face many challenges with very few means and tools to face them “.

On social media, anger is brewing against the Lebanese leaders accused of having plunged the country into chaos and of being, through incompetence, at the origin of the disaster of 4 August.

“This political class, which has been stealing from us and lying to us for years, which deprives us of electricity every day, was slowly killing us. With this explosion, it is their incompetence that is killing us, soon they will have us all. “, concludes Maya.