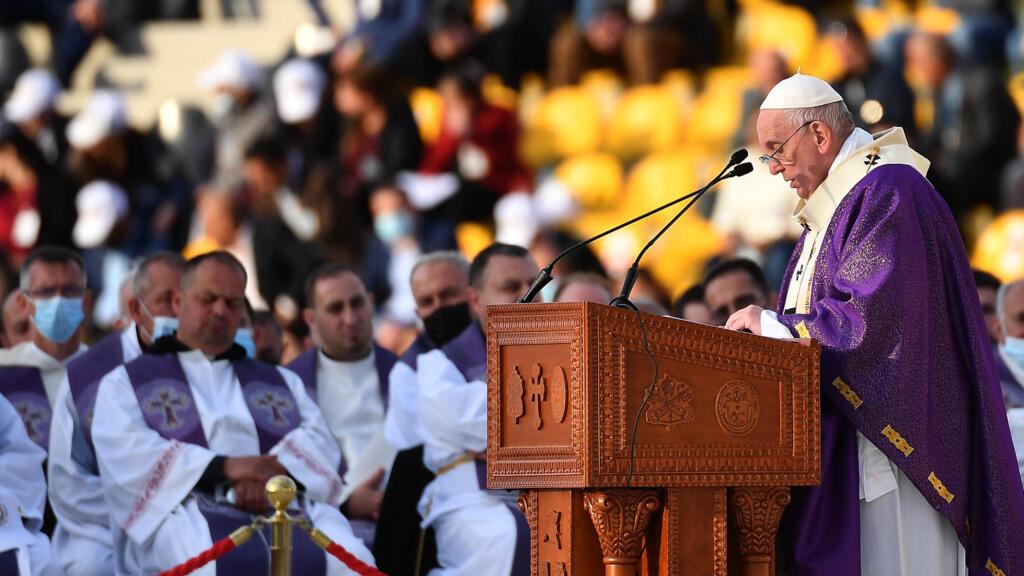 Visiting Iraq until Monday, Pope Francis celebrated his highest mass in the country on Sunday. Thousands of worshipers attended this event, which took place in the Franso Hariri stadium, in Erbil in Iraqi Kurdistan.

After praying for the “victims of the war” in northern Iraq ravaged by jihadists, Pope Francis celebrated his highest mass on Sunday March 7. his historic trip to this country, in front of thousands of faithful and under high security.

Now in Iraqi Kurdistan, which presents itself as a haven of peace in a Middle East torn by war, Pope Francis, fond of crowd baths and who has never stopped tacking to bless Iraqi Christians on his way, is finally in its element.

The 84-year-old Argentine pontiff appeared standing in his famous “popemobile” in front of thousands of faithful seated at a distance from each other on the lawn or bleachers of the Franso Hariri stadium in Erbil, some under umbrellas to protect themselves from the sun .

>> To read also: Pope Francis in Iraq: a “crucial” visit after “30 years of descent into hell”

He made his entrance under the ululations, the percussions and the cries of the faithful who followed him while running in a real atmosphere of stadium.

The Pope then began Mass in Latin, purple cope on his back and white cap on his head, in front of a silent and collected assembly, on the last day of his visit to Iraq, the first to be carried out by a Pope in this country.

A visit under high protection

After traveling by plane, helicopter or armored car through a country that emerged three years ago from a bloody conflict against the jihadist group Islamic State (IS), the Pope is, on Sunday, as close as possible members of one of the oldest Christian communities, but also one of the most dispersed in the world.

Since his arrival on Friday, bodyguards and security forces have been more than heightened vigilance. They are again for this mass at the Franso Hariri stadium (named after a Christian politician murdered 20 years ago) after a rocket attack at the end of February against Erbil airport.

But on Sunday, he managed to reach the crowd, first in Mosul, the former self-proclaimed “capital” of ISIS, where he lamented the exile of Eastern Christians on a platform built in the middle of the ruins for lack of church still standing.

>> See also: In Mosul, Christians at the bedside of churches mutilated by the Islamic State group

“It’s the best of days!” Exclaims Hala Raad, who saw it pass. “Now we hope to live in safety, that’s the most important thing,” continues this Christian, who fled Mosul during the jihadist breakthrough and only returns there for short visits.

Then, in Qaraqosh, a martyred Christian locality halfway between Mosul and Erbil, the sovereign pontiff called on a moved crowd to “rebuild” and “not to be discouraged”, while the number of Christians has increased in 20 years of 6% to 1% of the population in Iraq.

If the Pope travels under high protection in a country where clandestine jihadist cells are still hiding, he must also deal with the Covid-19 for his first trip in 15 months.

Iraq is in total containment after daily contaminations reached a record: more than 5,000 cases.

As a result, the number of worshipers in the stadium has been reduced several times. Because if the Pope and all the journalists and ecclesiastics who accompany him were vaccinated before their departure, none of the faithful present at the stadium was. Only 50,000 doses of vaccine have reached Iraq to date and only doctors have been able to benefit from it.

“It is a particular trip also in terms of health and safety conditions,” agreed Matteo Bruni, the Vatican spokesperson.

But, he continues, it is “a gesture of love for this land and this people” that Francis wanted to visit since the breakthrough of ISIS in 2014 in Iraq, and “any gesture of love is always a little extreme. “.

The Pope is due to leave Iraq for Rome on Monday morning. Before going to the north of the country, the sovereign pontiff went to Najaf, a Shiite Muslim holy city in the south, on Saturday to meet the great ayatollah Ali Sistani. The latter told him to work so that the Christians of Iraq live in “peace”, in “security” and with “all their constitutional rights”.

Many Christians are still reluctant to return home permanently. When in 2014, ISIS took the Nineveh Plain, tens of thousands of them fled and few now trust the security forces who then abandoned them, they say.

Today, many say they live in fear of the paramilitaries now integrated into the state who have taken the ground from the jihadists.

Pope Francis’ program in Iraq is ambitious: Baghdad, Najaf, Ur, Mosul, Qaraqosh, Erbil. From Friday to Monday, he will travel 1,445 km in a country marked by Iranian-American tensions still latent and a record number of Covid-19 contaminations. The trip will take place in an armored car and without a walkabout while the helicopter or the Pope’s plane will sometimes fly over areas where jihadists from the Islamic State organization are still present. The Iraqis will have to follow him on television.

In the United States, New York justice calls for the dissolution of the NRA