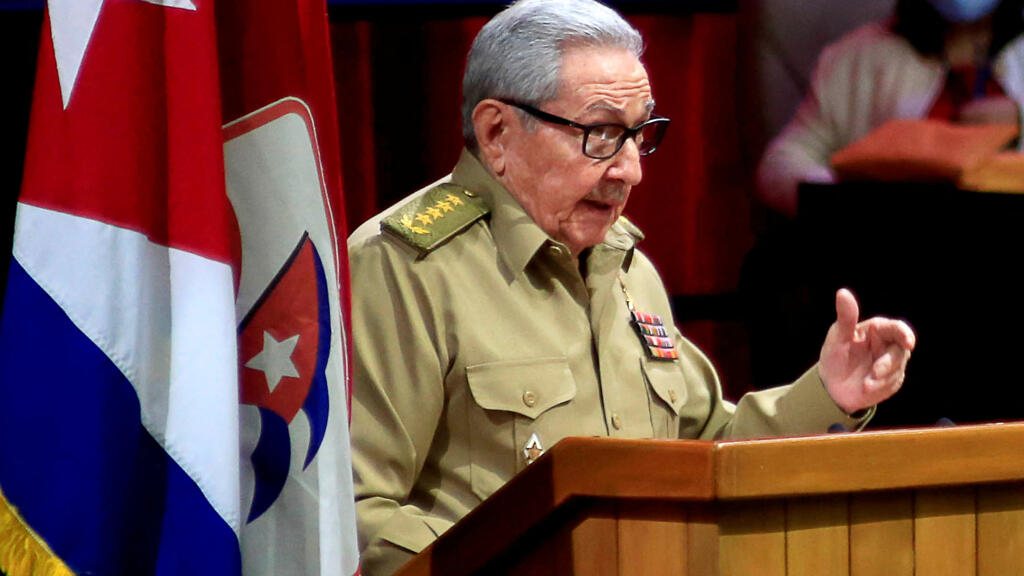 The First Secretary of the Cuban Communist Party, Raul Castro, called on Friday for a “respectful dialogue” between Cuba and the United States, in his last major speech at the head of the single party. He thus leaves the reins of the party to President Miguel Diaz-Canel.

Sixty years day to day after the proclamation by Fidel Castro of the socialist character of the Cuban revolution, his brother Raul chaired his last congress of the Communist Party on Friday April 16, behind closed doors. Before handing over to a new generation, the First Secretary of the Cuban Communist Party called for a “respectful dialogue” between Cuba and the United States.

“I confirm, at this party congress, the will to establish a respectful dialogue, a new form of relations with the United States without claiming that, in order to achieve this, Cuba renounces the principles of revolution and socialism “, he declared.

The 89-year-old revolutionary was speaking at the Communist Party convention, which opened for four days on Friday and marks his retirement to make way for a new generation.

Relations between Cuba and the United States, after a historic but short-lived relaxation between 2014 and 2016, are new strain under the administration of Donald Trump, which has severely reinforced the embargo in force since 1962.

For his part, Joe Biden, who had promised in the campaign to reverse certain sanctions, has not said a word on the island since his inauguration in January.

“The objective of these measures is to extend the economic siege” on Cuba, “with the declared aim of strangling the country and causing a social explosion,” denounced Raul Castro, denouncing this “economic war”, according to reports. images broadcast on state television.

Dressed in a military uniform, Raul Castro received a standing ovation on his arrival at the congress, after which he must cede, on Monday, the post of first secretary of the party to President Miguel Diaz-Canel, a 60-year-old civilian.

“My task is finished”

Unlike previous editions, no images were shown on Friday morning on television, with only a few photos and videos dribbled by state media via social media, before the news broadcast aired clips.

The historic meeting began 60 years to the day after Fidel Castro proclaimed the socialist character of the Cuban revolution, now “irreversible” since the adoption of a new Constitution in 2019.

“As far as I am concerned, my task (…) ends, with the satisfaction of having fulfilled my role and with confidence in the future of the motherland”, indicated Raul Castro.

But “that no one doubts it: as long as I live, I will be ready, with the foot on the stirrup, to defend the fatherland, the revolution and the socialism”, he hammered, under the applause of some 300 party delegates from all over the country gathered at the Havana Convention Center.

Miguel Diaz-Canel, who replaced him as president of the country in 2018, will be the first civilian to also lead the party, in which he has led his entire career. It is “the congress of continuity,” he recalled via Twitter, stressing that the guidelines of power in Cuba, one of the last five communist countries in the world, would not change.

If economic reforms are urgent, in this country in deep crisis under the effect of American sanctions and of the Covid-19 pandemic, the dogma of the single party will be maintained.

“The party constitutes the guarantee of national unity”, declared José Ramon Machado Ventura, 90 years old, number two of the party, inaugurating the congress “with the conviction that we will continue to be faithful to the heritage of our martyrs and to the example of Fidel and Raul “.

“Need more” with the arrival of mobile internet

After Fidel’s death in 2016, Raul’s departure turns a historical page for the island and its inhabitants, almost all of whom have never known another ruling family. “Raul will no longer be at the head of the party, but if there is a problem Raul will be there, he is not dead,” wants to believe Ramon Blande, an 84-year-old communist activist.

In the streets of Havana, Cubans seem especially preoccupied by food shortages, queues in front of shops and skyrocketing inflation caused by the recent unification of the two local currencies. “I hope that with the congress, it will improve because the prices are very high, the salaries have increased (…) but that is not enough”, laments Maria Martinez, retiree of 68 years.

Cuba has experienced unprecedented social unrest in recent months, spurred on by the recent arrival of mobile internet, with several demonstrations from various sectors of civil society.

“The exit from the active political landscape of Raul Castro is logically a historical turning point, more or less visible in the immediate future”, notes the famous author of detective novels Leonardo Padura in a column published by the Nueva Sociedad site. “But people need more. Not just to talk, but to live better. I believe that after so much sacrifice, Cubans deserve it.”

► Read also : In Cuba, Raúl Castro bows out and makes way for the new generation

historic drop in GDP from April to June, the country enters recession