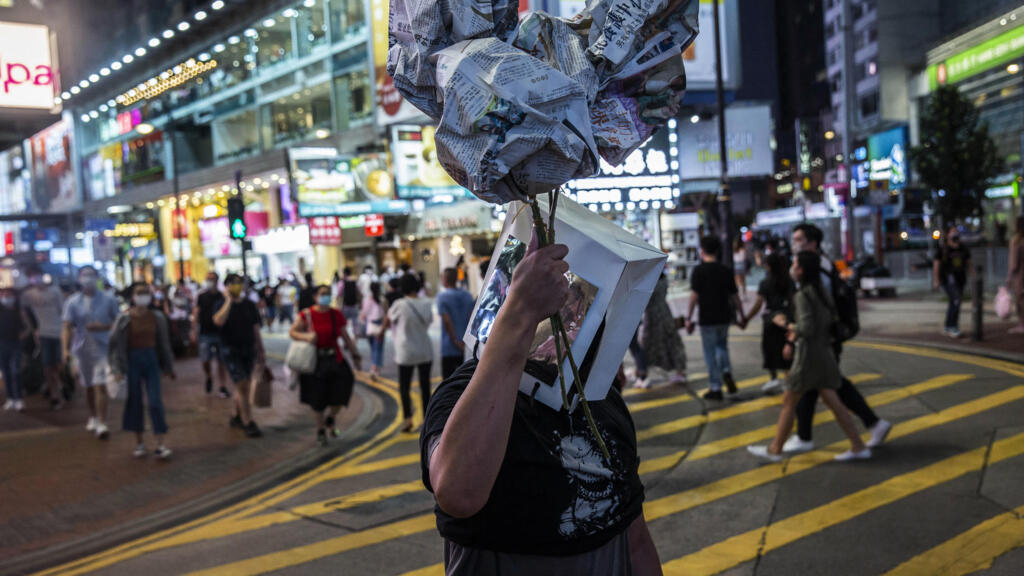 While for the second time in three decades, commemorations of the bloody intervention of the Chinese army against the Tiananmen movement in 1989 are banned in Hong Kong, pro-democracy activists intend to challenge Beijing.

How to commemorate the 32e anniversary of the crackdown on the Tiananmen social and student movement in 1989, Friday in Hong Kong, despite the ban on the traditional vigil by the authorities?

This is the challenge facing the Hong Kong people who seek by all means to circumvent “zero tolerance” vis-à-vis the demonstrations in the former British colony, shaken in 2019 by a vast protest movement against the grip of the Chinese power.

Mobilizing on social networks, reading poems or printing t-shirts … There is no shortage of ideas to honor this meeting in one of the only places in China with Macao, where for decades, We commemorated on June 4 the bloody intervention of the Chinese army of 1989 in Beijing. And this, while the Chinese Communist Party (CCP) succeeded in establishing in mainland China a state silence on this murderous repression, subject to systematic censorship.

Thus the artist Kacey Wong intends to redistribute, on Friday, hundreds of pieces of candles consumed during previous evenings. “Each candle burned carries within it a person’s recollection for those who sacrificed themselves for democracy, as well as the hopes that one day democracy will triumph,” he says. On D-Day, he will give them away at two Chickeeduck outlets, a chain of textile stores that sells pro-democracy products.

In 2020, defying the pro-Beijing authorities who had put forward the pretext of the epidemic to ban commemorations, tens of thousands of people gathered peacefully in a park in the heart of Hong Kong Island. If the police had not intervened at the time, some organizers have since been sentenced to jail.

The security forces should not be so passive this year since 3,000 police will be mobilized to prevent any gathering in the park. They also recalled that participation in an unauthorized gathering was punishable by five years in prison.

And for good reason, in one year, the political climate has deteriorated considerably in the former British colony with the relentless repression of the pro-democracy movement. Authorities have warned that those who gather to commemorate Tiananmen could fall under the National Security Act. This law with its very fuzzy formulation is the instrument of the takeover of Beijing and has the effect of preventing almost any form of dissent.

On May 30, “Mamie Wong”, a 60-year-old known for her pro-democracy commitment, was arrested for “knowingly participating in an unauthorized rally and for attempting to incite others to do the same.” The activist walked towards the Liaison Office, the body representing Beijing in Hong Kong, holding up a sign in remembrance of Tiananmen and a yellow umbrella, one of the symbols of the protest …

Commemorate by turning on the light

Despite the climate of fear, pro-democracy activists want to believe that the government will not be able to prevent all acts of commemoration of the greatest democratic movement in modern China. Traditionally, it was at the symbolic hour of 8:09 a.m. that the candles were lit during the vigil, with reference to the date of 1989.

Former incarcerated deputy Albert Ho invited Hong Kong people to light candles, or the torch on their smartphone, in their neighborhood. “You can consider all of Hong Kong to be Victoria Park,” he told the South China Morning Post last week, referring to the park where the banned gathering was held in 2020.

For his part, the artist Pak Sheung-chuen called on all the inhabitants to write the numbers 4 and 6, for the date of June 4, on the switches of their house, to transform the fact of turning on the light into a gesture of commemoration. “Protect the truth and refuse to forget,” he wrote on Facebook.

Chan Ka-hing, a designer, came up with another idea on a social network, posting a black 4 by 6 rectangle and suggesting printing it on white t-shirts to wear.

Debby Chan, a district councilor, is planning a poem reading in her neighborhood. “Commemorating June 4 is an emblematic meeting of the pro-democracy movement,” she told AFP. “If we stop today, the red lines will keep getting closer.”