In Israel, thousands of anti-Netanyahu protesters take to the streets again 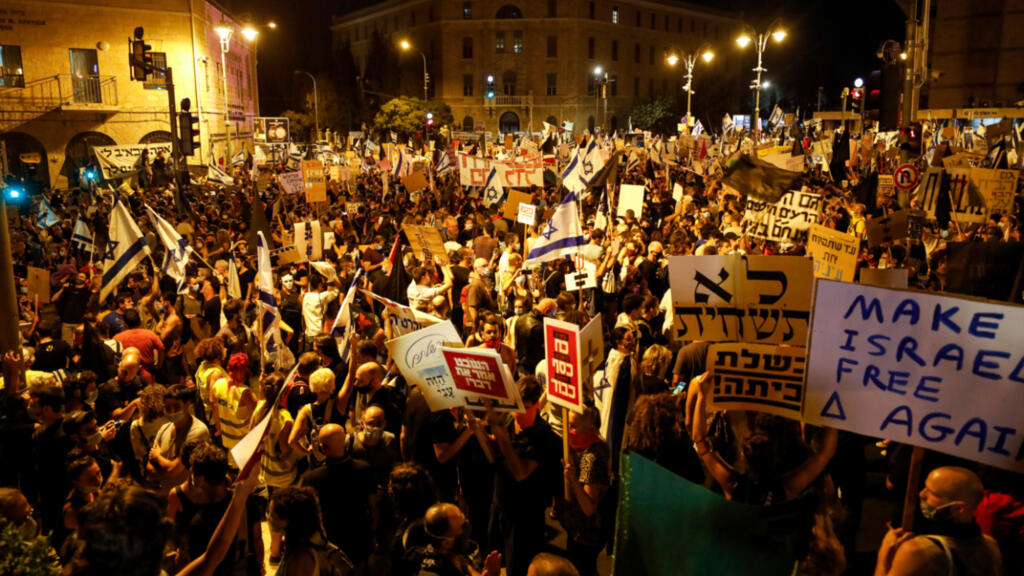 Thousands of Israelis took to the streets again on Saturday to demand the resignation of Prime Minister Benjamin Netanyahu, charged with corruption and accused of mismanagement of the Covid-19 pandemic.

Thousands of Israelis took to the streets again on Saturday August 1 to demand the resignation of Prime Minister Benjamin Netanyahu. charged with corruption and accused of mismanaging the novel coronavirus pandemic.

The protests took place in several parts of the country, at crossroads or on bridges, where protesters wearing protective masks carried signs accusing Benjamin Netanyahu of “failure.”

In Tel Aviv, hundreds of demonstrators protested unemployment and the lack of government assistance, according to local media.

A crowd also gathered outside the Prime Minister’s residence in Jerusalem, where organizers reported thousands of people calling on Benjamin Netanyahu to resign.

Israelis also demonstrated outside the Prime Minister’s private residence in the western coastal city of Caesarea.

Overwhelmingly wearing protective masks, the protesters accused Benjamin Netanyahu of corruption and for failing to contain the Covid-19 epidemic and to resolve the economic crisis.

Israel is suffering a second wave of contaminations and the unemployment rate has exceeded 20% in recent months against 3.4% in February.

More than 72,000 cases of contamination, including 523 deaths

For many weeks, protesters have been shouting their fed up against Benjamin Netanyahu, indicted in November 2019 for corruption, fraud and breach of trust in three cases, a first for an Israeli head of government during his mandate.

Israel initially bragged about its handling of the pandemic, with a relatively low number of sick cases. But as the deconfinement, decided at the end of April to get the economy back on track, cases of infection have multiplied, forcing the government to impose new restrictions.

The country of nine million inhabitants has officially recorded more than 72,000 cases of contamination so far, including 523 deaths.

In the face of mounting anger, the Israeli prime minister, in power since 2009, on Saturday accused Israeli TV channels 12 and 13 of “spreading propaganda to leftist anarchist protesters,” by widely covering their rallies.

“They are desperately trying to intoxicate the public, in order to bring down a strong right-wing prime minister,” Benjamin Netanyahu’s party Likud said in a tweet, retweeted by Netanyahu. The latter also accused “the media of ignoring the violent nature of the demonstrations and the calls to kill the Prime Minister and his family”.