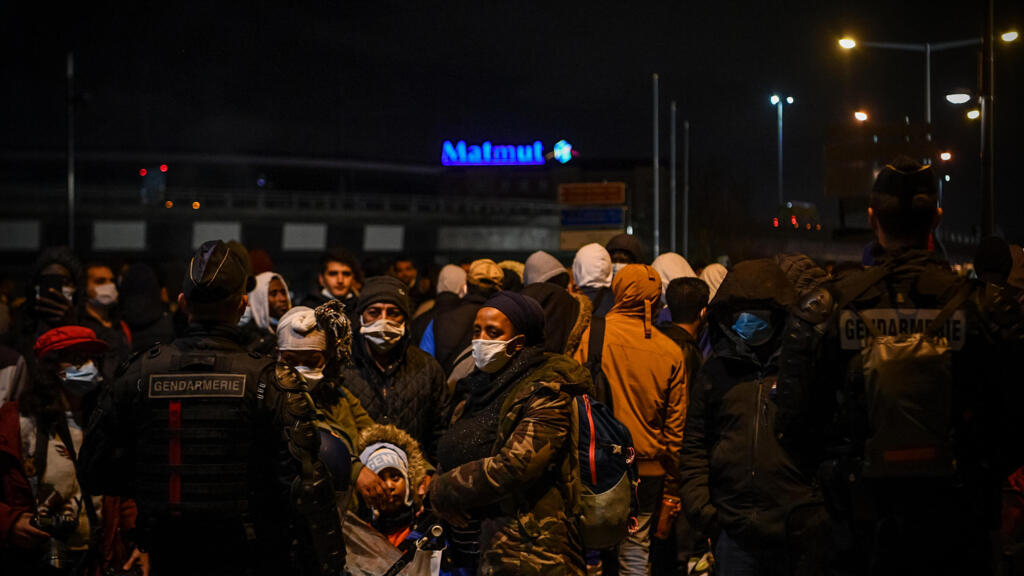 A migrant camp, located in Saint-Denis, near Paris, was dismantled on Tuesday morning by the police. More than 2,000 people lived in this camp, which formed in mid-August. The associations are calling for the rapid support of these vulnerable groups exposed to Covid-19.

The police proceeded, Tuesday, November 17, in Saint-Denis, at the foot of the Stade de France, with the dismantling of a migrant camp, where more than 2,000 people lived. This evacuation operation was denounced by associations who see it as an “endless and destructive cycle”.

Framed by a large police force, the operation to evacuate and shelter exiles to various reception centers and gymnasiums in Île-de-France began around 7 a.m., far from journalists kept at a distance.

From 4.30 a.m., migrants, with their belongings, were waiting to be picked up and boarded buses, in a joint operation between the Paris police headquarters and the Île-de-France region prefecture. and Seine-Saint-Denis.

According to the count of the association France Terre Asile, operator of the State, approximately 2,400 exiles still lived the day before in this camp, which has continued to grow since August. Pallet fires were visible from the security cordon put in place by the police.

Shelter for people in a legal situation

“These camps are not acceptable” declared, during a press point, the Paris police chief, Didier Lallement. “This operation takes place to ensure that people in a regular situation are sheltered and those in an irregular situation are not intended to remain in the territory”, explained the prefect.

>> To read also: Naturalization of foreigners on the “front line” against the Covid, an announcement effect?

All people supported will first be tested for Covid-19 in screening centers set up by the ARS. They will then either be isolated first, in the event of a positive result, or immediately put away.

“These are antigenic tests, the results of which will be obtained quickly, the same day,” Delphine Rouilleault, director general of France terre d ‘Asile, told AFP.

This morning the sheltering of more than 2,000 people in the camp located in Saint-Denis took place.

In total, 70 buses were to transport migrants while 26 accommodation centers were set up by the Prefecture of the Ile de France region (Prif) to accommodate them.

During the first confinement, which entered into force on March 17, a large camp of 700 migrants located in Aubervilliers, was dismantled on March 24. The previous evacuation dated back to July in the neighboring town of Aubervilliers. The first tents appeared in Saint-Denis, still along the canal, in mid-August.

The makeshift encampment, where hundreds of tents had gradually been set up, was mostly made up of single men, mostly from Afghanistan, but also from Sudan, Ethiopia and Somalia. Many have previously passed through other camps in Paris, successively dismantled.

Migrants “confined outside”, deplores Doctors of the World

“How has this camp been able to develop in a state of health emergency, where respect for barrier gestures is impossible and where people live in total unsanitary conditions? These people are confined outside”, regrets Louis Barda, general coordinator at Médecins du Paris world.

Alix Geoffroy, in charge of the Catholic Cedre-Secours program, both “relieved” and “worried” by this sheltering, wants “there to be a break from the streets for these people during the confinement”.

For this evacuation, the strategy of the authorities remains the same. “Two thousand reception places are mobilized, in gymnasiums and reception centers,” Didier Leschi, director general of the French Office for Immigration and Integration, told AFP.

In a press release published Tuesday, around thirty associations and collectives, such as Cimade or Solidarité Migrants Wilson denounce the “endless and destructive cycle” of evacuations.

A football match at Medaieval

France and South Africa in tune on the lifting of patents

announcement effect or desire for change?