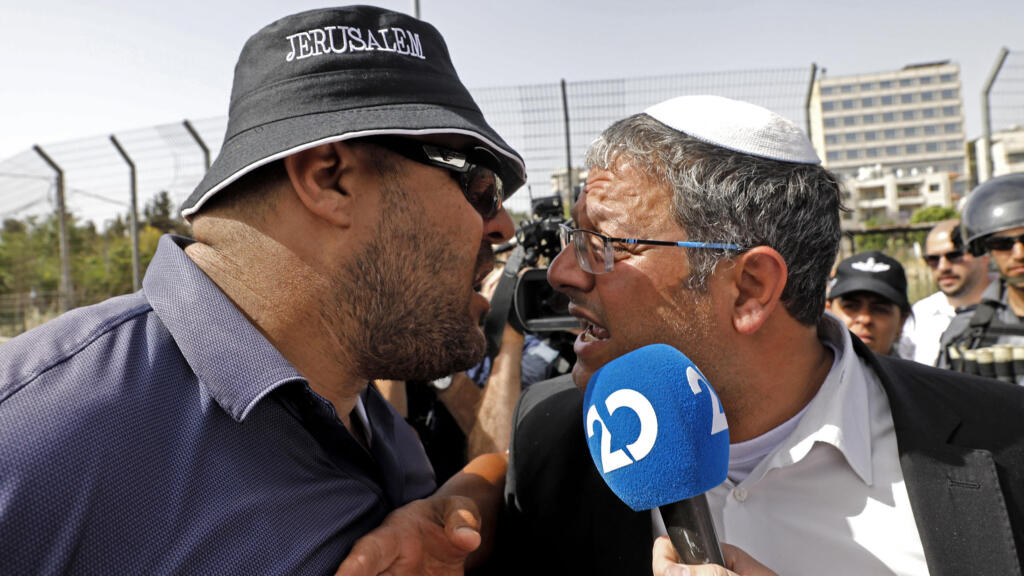 Israel’s police chief accused MP Itamar Ben Gvir of adding fuel to the fire in Jerusalem and being partly responsible for the violent protests that have rekindled the fuse of the Israeli-Palestinian conflict. A look back at the career of this ultranationalist whose entry into the Knesset in March seems to have strengthened the confidence of the Israeli far right.

“The person who is responsible for this Intifada is Itamar Ben Gvir”. The chief of police in Israel, Kobi Shabtai, did not mince words during this morning briefing with Benjamin netanhayu. According to him, the provocations of the ultra-right MP and his supporters angered the Palestinians and provoked the violent clashes that shook Jerusalem last week.

Itamar Ben Gvir was quick to respond by saying Thursday (May 13th) that Kobi Shabtai should be sacked and accused the police of not having used enough force to contain the Arab protests.

Among the honors of the deputy, the installation of an office last week in full Sheikh Jarrah, This district of East Jerusalem that has become the symbol of Israeli colonization. At the end of April, these are his allies of Lehava, a movement that advocates the ban on marriages between Jews and non-Jews who set fire to the powder by shouting “Death to the Arabs”, near the Damascus gate.

“The police chief has probably not been up to the events since the start of the crisis but he is right to say that Itamar Ben Gvir and his movement played a role in this crisis”, confirms for France 24 historian Simon Epstein who also points to the strategy of confrontation led by Islamist extremists. “The result: surges of violence in Jerusalem which then spread to mixed towns in the country”.

It was only 19 years old that Itamar Ben Gvir made a sensational entry into Israeli public life. In 1995, in a climate of hatred following the Oslo accords with the Palestinians, he brandished the badge of Prime Minister Yitzhak Rabin’s car in front of the cameras.

“We have reached this symbol. We will reach it,” he said. Yitzhak Rabin will be assassinated by a Jewish extremist a few weeks later.

Indicted more than fifty times by the courts since his adolescence, notably for inciting hatred, the Jewish supremacist ended up becoming a lawyer for, he said, “defending himself”.

“He has become the official advocate of all fanatics and far-right activists,” said Denis Charbit, professor of political science at the Open University of Israel in Ra’anana, contacted by France 24.

In 2006, for example, he defended two teenage boys accused of participating in the attack on a house in the West Bank where two parents and their baby were burned alive.

Regularly invited on television sets to create controversy and increase the audience, Itamar Ben Gvir is “a colorful personality with an unparalleled repartee. He uses aggressive rhetoric and speaks very harsh and violent, ”says Denis Charbit. “In short, he says, ‘We’re the best and we’re going to check them out’”.

>> See our debate on France 24: Middle East: towards a large-scale war?

The xenophobic discourse of Itamar Ben Gvir has its origins in the ideology championed by Meir Kahane, an extremist rabbi who wanted the establishment of a theocratic state and the expulsion of all Arabs from Israel.

His nauseating ideas repelled the Israeli political class so much that during his speeches in the Knesset, where he was a member between 1984 and 1988, all his colleagues left the precincts of parliament. Assassinated in 1990, his party was eventually banned in 1994 for terrorism and racism.

“Meir Kahane left behind several heirs, explains Simon Epstein. But the smartest is Ben Gvir. The latter understood that this racist discourse had to be softened a little because without it, he would never be able to enter the Knesset “.

After three unsuccessful attempts, Itamar Ben Gvir ended up being elected as a member of parliament last March, leading a coalition of religious Zionist parties.

Affected by several lawsuits for corruption, the outgoing prime minister was playing for political survival during these elections. “He was desperate and absolutely insisted on having a majority in Parliament. He considered Itamar Ben Gvir to be the solution ”, analyzes Simon Epstein. “It was a victory for the fringes of the racist ultra-right and a bad sign for the coexistence between Jews and Arabs.”

>> To read on France 24: Who are the Israeli Arabs, these Palestinians from Israel?

Experts interviewed by France 24 agree that the entry into Parliament of an ultraconservative coalition led by Itamar Ben Gvir has bolstered virulent groups of Jewish supremacists in violence and reinforced their sense of impunity.

“We have seen protests organized by the far right in Jerusalem in recent weeks. Previously, these demonstrations would have been banned in the hope of calming things down. But because of Benjamin Netanyahu’s complicity, the police have been much more tolerant of them, “said Simon Epstein. Especially since the camp opposite was also seething. It’s like we did everything to make it explode ”.

In recent days, appalling lynching scenes involving Arab extremists or members of the Israeli ultra-right have shocked public opinion. The most recent was the assault in Bat Yam near Tel Aviv on a presumed Arab man by far-right activists. A lynching broadcast live at prime time that drew unanimous condemnation from the Israeli political class.

Even cities considered as models of coexistence between Jews and Arabs, like Saint-Jean-d’Acre, experience unrest and violence. “There had been a lot of positive signs in recent years” on the question of the integration of Arabs into Israeli public life “but within three weeks, we find ourselves in a situation of latent civil war”, deplores Simon Epstein.

“I do not know how we are going to go about fixing this, warns Denis Charbit, especially if Benjamin Netanyahu manages to remain in the post of Prime Minister”.

In Mali, the Prime Minister responsible for forming a government of "wide openness"