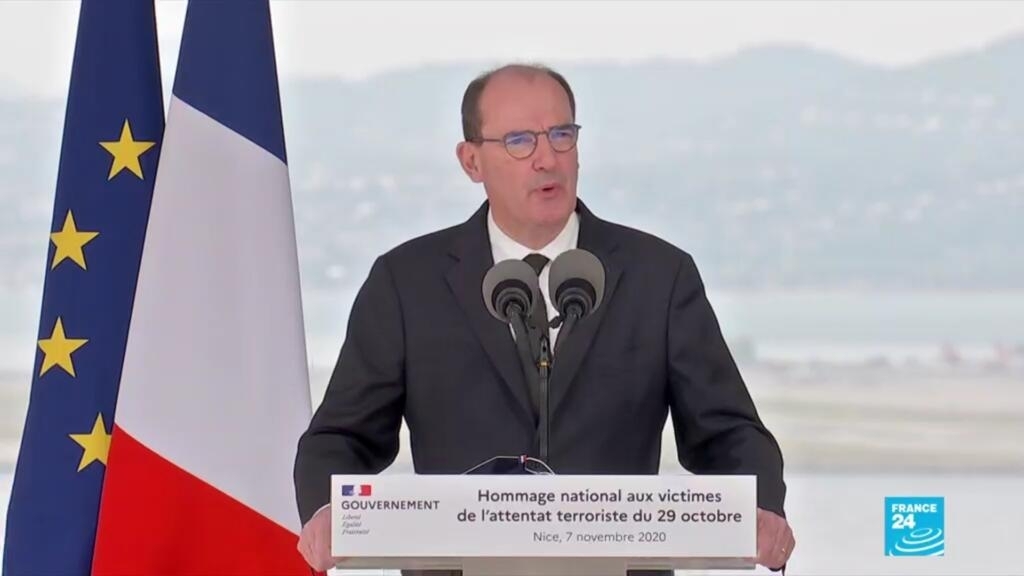 A national tribute chaired by the Prime Minister, Jean Castex, must be paid on Saturday in the presence of the relatives of the three people killed on October 29, two women and the sacristan of the church, during the attack on the Basilica of Nice.

Nine days later the knife attack perpetrated in the basilica of Nice, a national tribute chaired by the Prime Minister, Jean Castex, will be paid on Saturday November 7 in the presence of the relatives of the three people killed on October 29, two women and the sacristan of the church.

Three other members of the government, the LR mayor of Nice, Christian Estrosi, the former President of the Republic Nicolas Sarkozy, as well as other elected officials and all the religious authorities of Nice will take part in this sober ceremony, organized at the top of the Castle Hill, a park overlooking the city and its Mediterranean bay.

From 9 a.m., Anne Gourvès, co-president of Promenade des Anges, the association of relatives of victims of the July 2016 attack which left 86 dead and more than 450 injured, was preparing for the ceremony.

“These are very important moments, marks of respect, solidarity, compassion for these victims. I was hurt to hear that no more tributes, flowers or candles are needed, on the contrary” a she confided to AFP.

From 10 a.m., after the national anthem and a review of the troops, the portraits of the three victims should be brought by their families and relatives, who should also soon be received at the Vatican by Pope Francis.

The favorite songs of two of the victims will accompany their portraits: “Indifference“, by Gilbert Bécaud for the parishioner Nadine Devillers and”Toda menina baiana“, by Gilberto Gil for the Franco-Brazilian Simone Barreto Silva. Those close to the sacristan Vincent Loquès have chosen to read Victor Hugo’s poem,” Tomorrow, from dawn … “in which the writer evokes the disappearance tragedy of his daughter Léopoldine.

The mayor of Nice, then the Prime Minister must then speak, before a minute of meditation. The government must also present the three deceased with the national medal of recognition to victims of terrorism.

At the end of this ceremony, the head of government will have “a time of exchange with the families of the victims”, according to the program broadcast by Matignon. Then he will deliver another speech and decorate the municipal police officers of Nice who arrested the perpetrator of the attack.

Nadine Devillers, 60, Vincent Loquès, 55, and Simone Barreto Silva, 44, were in the Basilica of Notre-Dame-de-l’Assomption on the morning of October 29 when a 21-year-old man, Brahim Aouissaoui, of Tunisian nationality, arrived in Nice the day before, attacked them with a knife around 8:30 am.

“We do not expect such a tragic death, in such a place … Entering a church to kill three people is inconceivable for me”, told Nice-Matin Joffrey, Nadine’s husband. Devillers. “I am in great pain, luckily I am surrounded by good people,” he said, determined to hold on to his wife, with whom he had been in a relationship for almost twenty-six years.

The alert was given by Simone Barreto Silva, who died after taking refuge in a restaurant near the basilica. This charismatic Franco-Brazilian woman was raising her three children, aged 7, 11 and 15, on her own. Located near Nice central station, the basilica is in a busy area. On the Thursday of the attack, the people of Nice hurried to make purchases there before the containment against the coronavirus epidemic.

An attack that revives the memory of the attack of July 14, 2016

The emotion and the tension were already high, in Nice as elsewhere in France, since the assassination of the teacher Samuel Paty, 13 days earlier, on October 16 in Conflans-Sainte-Honorine (Yvelines).

In Nice, the attack on the church also revived the memory of the very deadly attack on the Promenade des Anglais on July 14, 2016, perpetrated by a 31-year-old Tunisian who had rushed into the crowd gathered for the fire. fireworks behind the wheel of a truck.

“It is gratuitous violence, horror in its purest form, we do not do that and certainly not in the name of a religion when we have a little humanity in ourselves”, reacted Anne Gourvès of the Promenade des Anges association.

Since the start of the investigation into the attack on the Basilica of Nice, in addition to the assailant, 11 people were taken into custody and ten released. Known in Tunisia for acts of violence and drugs, Brahim Aouissaoui had turned to religion for two years and isolated.

Hospitalized in Nice after his arrest, without being able to be questioned, he was transferred on Friday by plane to Paris where the national anti-terrorism prosecution is conducting the investigation for “assassinations in connection with a terrorist enterprise”.

Two victims, Vincent Loquès and Simone Barreto Silva, have already been buried in private in recent days, after a mass in the basilica where they died. For the purposes of the autopsy, Nadine Devillers, whose remains presented “a very deep throat cut on the order of beheading”, according to the investigation, will be buried in a few days.