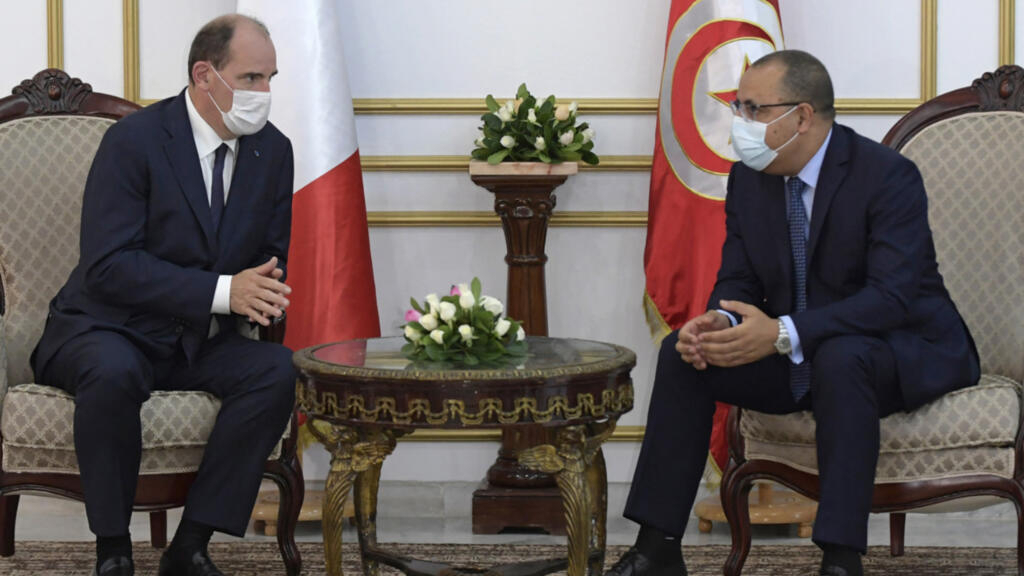 French Prime Minister Jean Castex has been visiting Tunisia since Wednesday in order to strengthen ties between Paris and Tunis. Among the “main priorities” of this visit, the health crisis, the economic partnership between the two countries, and the fight against terrorism.

Accompanied by half a dozen ministers, Prime Minister Jean Castex has been visiting Tunisia since Wednesday, June 2, in order to strengthen ties with a country crossed by crises – political, social, economic and migratory – and again weakened by the Covid-19 pandemic.

Two months after the controversial postponement of a government seminar in Algeria, the head of the French government is making his first major international outing in the smallest Maghreb state, for the 3rde Franco-Tunisian “High Council for Cooperation” (HCC), which follows those of 2017 and 2019.

Since the last edition, the executive has changed in Tunisia, with the election to the presidency in October 2019 of Kaïs Saïed, an independent scholar, then the appointment in July 2020 as head of government of Hichem Mechichi. As a backdrop, major political turmoil brought the top of the state into conflict with the Islamist-inspired Ennahda party, the main force behind a fragmented Parliament.

This visit, which therefore takes place in a tense and uncertain political context, must be structured around “four main priorities”, according to Matignon.

The friendship forged between France and Tunisia is unwavering and precious.
In Tunis, I came to strengthen the ties that unite our two countries: they are an asset and a strength to face our common challenges. pic.twitter.com/V7saKi7xgj

First “the health crisis” obviously, while a rebound in the epidemic at the onset of spring prompted locally fears of oxygen shortage. Material assistance should be provided knowing that France is committed to delivering autonomous oxygen production units to three Tunisian hospitals in the near future.

The questions of “economic partnership” and “support” will be the most visible heart of the exchanges, with the signing of agreements, a detour through the Tunis rapid rail network site, and a meeting on the topic of digital co-operation. organized by Tunisian (Utica) and French (Medef) employers.

But it will be difficult to avoid evoking the urgency of the situation in Tunisia, whose economy is bloodless: heavily in debt, suffering from a breathless development model based on cheap labor. , she hopes from the International Monetary Fund (IMF) a new loan over three years in return for promises of reforms.

If France pledged last year to lend 350 million euros to support the transformation of the country until 2022 (100 million have so far been paid), it is “neither enough, nor the good vector “, estimates to AFP the essayist Hakim El Karoui, author in May of a note for the Montaigne Institute on the stability of the Maghreb.

“We need donations”, around “one or two billion euros”, carried by a European initiative as part of the recovery plan, in order to “pass the Covid peak”, insists Hakim El Karoui, stressing that the announced weakness of the tourist season, one of the pillars of the Tunisian economy which represents around 14% of the GDP, clouded the outlook.

“We will find ourselves in the fall with people who have not reconstituted their income. We must not say that we did not see the coming social and political crisis,” he predicts.

These internal shocks also have direct consequences for the European Union (EU), which is currently in discussions with Tunisia for an economic aid agreement in exchange for efforts to prevent the departure of migrants. At present, 15% of migrants arriving by sea in Europe are of Tunisian nationality, constituting the largest contingent.

“Questions of the fight against terrorism” will also be invited into the discussions, assures Matignon. The Minister of the Interior, Gérald Darmanin, present in the delegation, had already come to discuss the subject in November, in the wake of the attack which killed three people in the basilica of Nice, committed by a 21-year-old Tunisian freshly landed in Europe.

Paris wants to expel a handful of individuals to Tunisia, out of a few dozen on file for radicalization, but negotiations are slipping on what looks like a “shitty stick”, according to Hakim El Karoui.

“Tunisians say to France: they have become radicalized in your country”, he sums up. Like the author of the attack in the Rambouillet police station in April, who arrived in France in 2009.

Finally, the visit should be used to prepare the next Francophonie summit to be held in Tunisia in November 2021 and to seal new agreements “between French and Tunisian training establishments”.

In France, emergency numbers disrupted by an outage at Orange

authorities overwhelmed by the migration crisis

For Washington, Moscow is hiding behind massive cyberespionage campaign in the United States

In Colombia, the government says it wants to “listen to all sectors” of society

The city of Afrin in Syria, at the heart of the conflict between Turkey and Kurdish militias