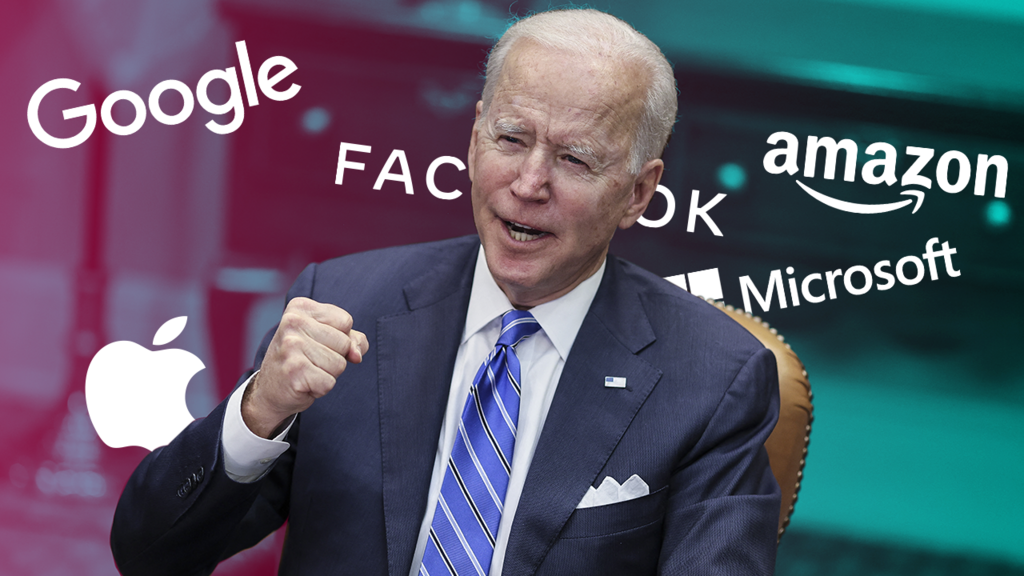 Since his arrival at the White House, Joe Biden has started to give pledges to those, more and more numerous on the right and on the left, who want to put the giants of Tech in step. But does the American president have the means to make his tenure a nightmare for Google, Facebook or Amazon?

Clouds are gathering on the horizon for the internet giants. On the one hand, the CEOs of the three main platforms – Google, Facebook and Twitter – are again at the helm of the Congress, Thursday July 25, to evoke the ubiquitous disinformation on social networks.

But this only represents what is happening in the spotlight. Another fight seems to be brewing behind the scenes, perhaps more dangerous for Mark Zuckerberg (CEO of Facebook), Sundar Pichai (boss of Google) or Jeff Bezos (CEO of Amazon) that the questions of elected officials.

From words to actions

Joe Biden’s administration appears to be gearing up to bring the Tech titans in line and reduce their emerging influence, survey after survey, too big in the eyes of Americans.

“After the Obama presidency, marked by cooperation between the government and Silicon Valley, that of Donald Trump who expressed a certain hostility towards these companies, but mainly on questions of freedom of expression, Joe Biden seems to him also wanting to do battle, for more profound reasons than its predecessors, which relate, in particular, to competition law “, summarizes Thibault Schrepel, specialist in competition law at the University of Law of Utrecht and Stanford, contacted by France 24.

During the campaign, Joe Biden spoke in favor of new rules to limit the risk of abuse of dominant position by Google and Amazon. He also claimed that Facebook or Twitter should be held legally responsible for hateful content or disinformation circulating on their platform.

Since arriving at the White House, the Democrat has started to turn words into action. With small touches at first, naming anti-Big Tech activist Tim Wu and Lina Khan, known for her vehement attacks on Amazon, as economic adviser to the president and commissioner for the Federal Trade Commission (FTC). “This is an important signal because it is the first time that a president has appointed real specialists in these issues to positions where they can have an impact,” said Martin Moore, specialist in media and communication regulation. policy at King’s College London, contacted by France 24.

It’s only a beginning. “For now, I’m just waiting to see. It’s interesting to note, for example, that he didn’t nominate Lina Khan for the FTC boss position, which is also vacant. So I don’t know. not yet at what point these titans of Tech must be afraid of the new administration “, estimates Thibault Schrepel.

Joe Biden is in any case pushed on his left by Democrats who want to do battle. In October 2020, the Democratic majority in the House of Representatives published a shock report of 440 pages to lay the foundations for an aggressive policy that could lead to the dismantling of the Gafam.

If the American president follows the left wing of his party, can he really succeed where his predecessors failed, namely to change the rules of the game for ultra-powerful multinationals who spend lavishly on lobbying and do not miss an opportunity to recall the number of jobs they have created in the United States.

Its main advantage “is the current dynamic that works against Gafam,” said Martin Moore. Scandal after scandal, the image of these Internet giants has tarnished in public opinion. But more importantly: “This is one of the few subjects in the United States where there is a consensus between Democrats and Republicans,” said the King’s College scholar.

It would be a golden opportunity to score political points for Joe Biden, who likes to brag about his talents as a unifier and his ability to achieve compromises with Republicans. “It’s a perfect theme for Joe Biden,” confirms Martin Moore.

But you still have to know what to do. Republicans are calling for the repeal or reform of Section 230, a regulation that prevents social media from being sued for content posted to platforms by users. Democrats are not big fans of the rule either, believing that it allows Facebook or YouTube to drag their feet to clean up the “fake news” and racist content that proliferates on social media.

Yet it is a minefield. “If we add rules, the risk is that the large groups, which have substantial financial and human resources, will comply with them without any problem, while the small competing platforms will not succeed. In the end, this will only strengthen the dominant position of Facebook or Twitter, “warns Martin Moore. Facebook CEO Mark Zuckerberg is aware of this and that is why in his speech on Thursday to elected officials, he pleaded for a reform of section 230.

The Chinese on the prowl?

Attacking this regulation therefore risks, because of this financial inequality, reinforcing the power of Big Tech, contrary to what the Democrats are asking for … The president can take up the proposals of the October 2020 report, which pushes to in-depth reform of competition law in the United States.

At the risk, this time, of having much lukewarm support from the Conservatives. The current rules took shape under the presidency of one of America’s historic right-wing figures: Ronald Reagan. It is a very narrow approach to the abuse of dominance, which has fostered the emergence of great American economic champions.

For Thibault Schrepel, there might be a more consensual way of approaching this vast project. A reform that would be more politically neutral would be to put more experts in these matters within the competent authorities. “One of the problems today is that these agencies do not have the skills to detect anti-competitive practices, and most of the cases the courts look at come from competitors who file complaints. These authorities need to be more proactive, ”says the specialist from the University of Utrecht.

But even if Joe Biden manages to find a way to tackle the tech titans that makes everyone happy, there is another obstacle that can screw things up: China. “Any measure that aims to weaken the power of American groups risks being seen as a blessing for Chinese competitors, such as Alibaba and Tencent, who are on the lookout for market share,” said Martin Moore, of King’s. College of London. And, politically, the last thing Joe Biden needs in this time of strained relations with Beijing is to make it look like he’s giving Chinese rivals Google, Facebook, or Amazon a freebie.

Tunisia prepares for a government of technocrats

Haro on PFAS, these “eternal pollutants” and omnipresent