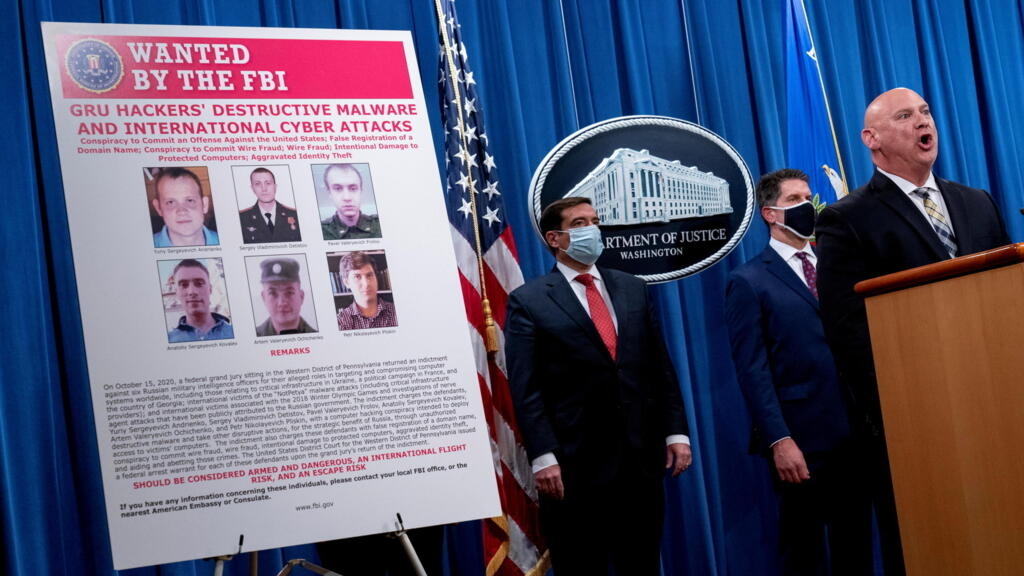 The American justice revealed Monday to have indicted six Russian agents for global cyberattacks having notably targeted the party of Emmanuel Macron and the Olympic Games in South Korea.

The American justice revealed Monday, October 19 to have indicted six agents of the russian military intelligence for some cyber attacks worldwide, which notably targeted Emmanuel Macron’s party ahead of the 2017 French elections and the 2018 Olympics in South Korea.

The agents “are accused of carrying out the most destructive and disruptive series of computer attacks ever attributed to a single group,” Deputy Justice Minister John Demers told a press conference.

The hackers, aged 27 to 35, are accused of having conducted their operations between 2015 and 2019 from an army building dubbed “the Tower” in Moscow “for the strategic benefit of Russia”, according to the indictment adopted Thursday.

According to this document, their first feat of arms was an attack on Ukraine’s electricity grid, which deprived the population of heating in the middle of winter.

Then, “the defendants supported a hacking and leaking operation in the days leading up to the 2017 French elections,” added John Demers.

Between April and May, they carried out seven attacks that targeted more than 100 people, mostly members of Emmanuel Macron’s party, En Marche, the indictment said.

To do this, they included malware in attachments entitled “Who can talk to journalists?”, Addressed to members of the campaign team from an address similar to that of the spokesperson of the candidate, according to this document.

Thousands of internal documents from the future president’s team, mixed with fakes, were then disseminated on the Internet. At the time, the French courts had opened an investigation for “breach of the secrecy of correspondence”.

The six Russians, who are wanted by US authorities, are also believed to have carried out the global attack on the NotPetya malware.

In June 2017, this “ransomware” had infected thousands of computers around the world, disrupting critical infrastructure, such as controls at the site of the Chernobyl nuclear accident and the ports of Bombay and Amsterdam.

Among his victims were many American entities – including a network of Pennsylvania hospitals that lost nearly $ 1 billion, according to the indictment.

In 2018, they are suspected of having taken part in phishing campaigns against the Winter Olympics in South Korea, in which the Russian delegation, accused of doping, was unable to participate. Passing themselves off as North Korean hackers, they notably disrupted the opening ceremony of the Games.

The computers of two organizations which were investigating the poisoning of ex-Russian spy Sergei Skripal in the United Kingdom in 2018 were also victims of these hackers.

They are not blamed for Russian interference in the 2016 US elections, said John Demers, even if one of them, Anatoly Kovalev, has already been indicted by another US court for intrusions into computers. responsible for organizing the poll.

“No country uses its computer weapons in such a damaging and irresponsible manner as Russia, causing unprecedented damage to pursue small tactical advances and satisfy outbursts of anger,” the senior official said.

At the same time, the British government accused Russian military intelligence services of continuing these attacks. According to the head of diplomacy Dominic Raab, the latter carried out reconnaissance missions on the Internet against targets linked to the Tokyo Olympics, postponed to 2021 by the pandemic.