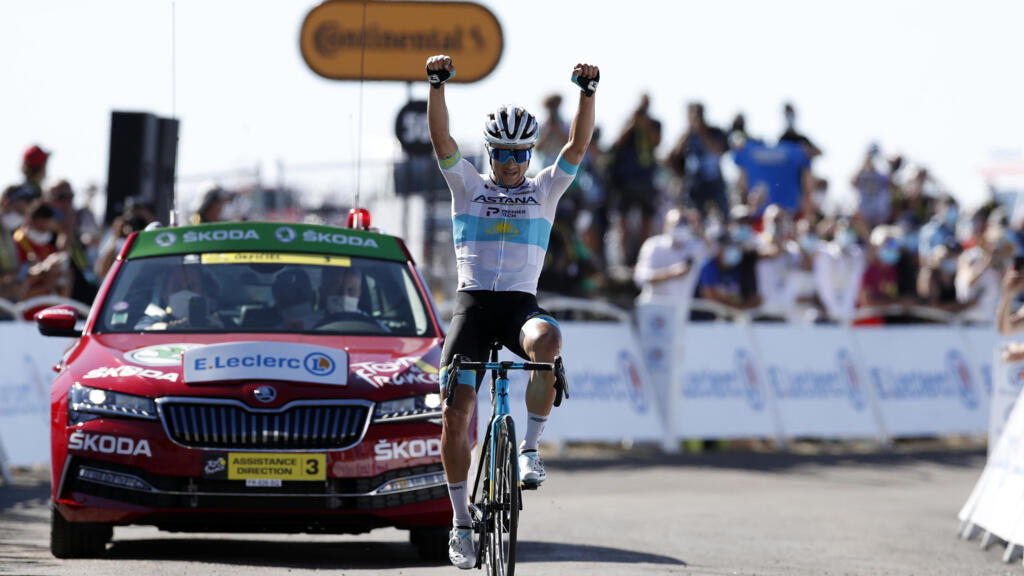 Kazakh Alexey Lutsenko (Astana) won the 6th stage of the Tour de France on Thursday after a long breakaway. During these 191 km between Le Teil and Mont Aigoual, in the Cévennes, the favorites remained in suspense, but the Briton Adam Yates (Mitchelton) retains the yellow jersey.

A Kazakh at the top of Aigoual: Alexey Lutsenko (Astana) won the 6e stage of Tour de France Thursday September 3, in the Cévennes mountains. Briton Adam Yates (Mitchelton) retains the yellow leader’s jersey he obtained after the penalty imposed on Julian Alaphilippe.

At an altitude of 1,560 meters, the favorites arrived grouped behind Alaphilippe, who sprinted in the last few hundred meters, almost three minutes after Lutsenko’s arrival.

The Spaniard Jesus Herrada, deprived of the title of champion of Spain by a mechanical incident, had to resign himself to second place, less than a minute away. He arrived in front of the Belgian Greg Van Avermaet and the American Neilson Powless, beyond two minutes.

Lutsenko, world champion hopes in 2012 (ahead of Bryan Coquard), won for the first time in the Tour, in his fifth participation. Cataloged as a master key, the protégé of Alexandre Vinokourov, the boss of the Kazakh training, had already won a stage of the Vuelta in 2017.

Lutsenko took over from his mentor, who is the only Kazakh rider to appear on the Tour’s stage winners list, ten years after the last success of “Vino” in 2010, who would become Olympic champion two years later, at the twilight of his career also marked by an exclusion from the 2007 Tour for doping.

In this sunny 191-kilometer stage, a group of eight riders (Roche, Herrada, Cavagna, Van Avermaet, Powless, Boasson Hagen, Oss, Lutsenko), formed from the initial part, counted up to six and a half minutes of advance in the long crossing of the plain. But he presented himself at the foot of the Col de la Lusette with an advantage reduced to 2 min 40 sec after an acceleration of the Ineos team of the title holder, Egan Bernal.

On the slopes of this unprecedented Cévennes pass, 11.7 kilometers long with steep passages, the British team then adopted a much slower pace, with the consent of their rivals.

Friday, the 7e 168 km long stage between Millau (Aveyron) and Lavaur (Tarn), brings the Tour back to the plain. For a new opportunity offered to sprinters, before entering the Pyrenees.

Naturism on the beaches of Barcelona

For Cnil, the StopCovid app is now fully compliant

Tips for cleaning your football boots