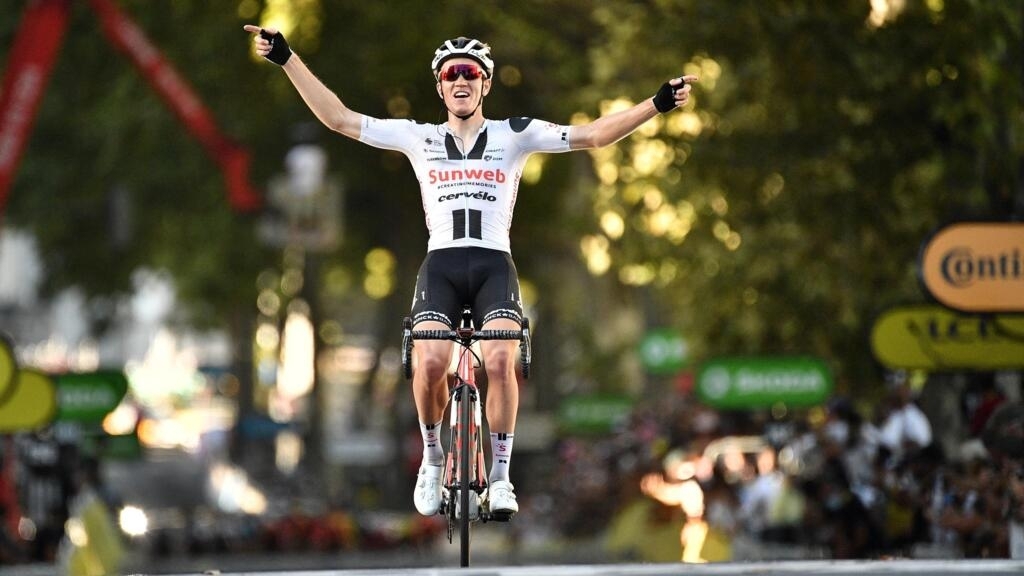 Danish rider Soren Kragh Andersen won the 19th solo stage. This is his second victory on the Tour de France. The Slovenian Primoz Roglic keeps his yellow jersey without problem two days before the arrival in Paris.

And two for Soren Kragh Andersen! The Sunweb runner has redone the coup de Lyon by extricating himself from the breakaway a few kilometers from the end of this 19th stage to win solo in Champagnole. Not worried, Primoz Roglic keeps the yellow jersey before the time trial on Saturday.

Kragh Andersen extricated himself 15 km from the finish of a group of a dozen runners mainly made up of sprinters. On the finish line, Slovenian Luka Mezgec and Belgian Jasper Stuyven completed the podium.

Kragh Andersen, 26, winner of Paris-Tours in 2018, signed his second success in a week after winning the 14th stage in Lyon last Saturday, also solo. And also the third of the Sunweb team, who came to the Tour with the sole objective of hunting down stages.

The transition stage at the exit of the Alps, towards Franche-Comté, gave material, under the heat, to a long solitary breakaway of the French Rémi Cavagna, a teammate of the green jersey Sam Bennett. Starting from the first minutes, as if he wanted to justify his nickname “TGV de Clermont-Ferrand”, the Auvergnat delivered a time trial, with favorable wind, on the often straight roads of the first part of the race. ‘step. He was controlled remotely by Peter Sagan’s Bora team, which gave him a maximum advantage of 3 minutes, and was joined 115 kilometers further by a trio of counter-attackers (Rolland, Cosnefroy, Rowe).

40 km from the finish, the race was unbridled despite a general regrouping operated by the Sagan formation. One group (Naesen, Rowe, Bauer, Mezgec, Van Avermaet, Trentin, Sagan, Bennett, Devenyns, Kragh Andersen, Arndt, Stuyven) formed in two stages as they approached the last 30 km before Soren Kragh Andersen did their false company …

As for the fight for the general classification, it was a quiet day for the yellow jersey Primoz Roglic, since the profile of this stage made it unlikely that the situation would change.

The Slovenian will therefore start in yellow and with a 57-second lead over his runner-up and compatriot Tadej Pogacar on Saturday during the time trial which will end at the top of the Planche des Belles Filles. A more than comfortable margin but which leaves a touch of suspense.

For the first time, a person has died from ransomware

How geometry is used in football