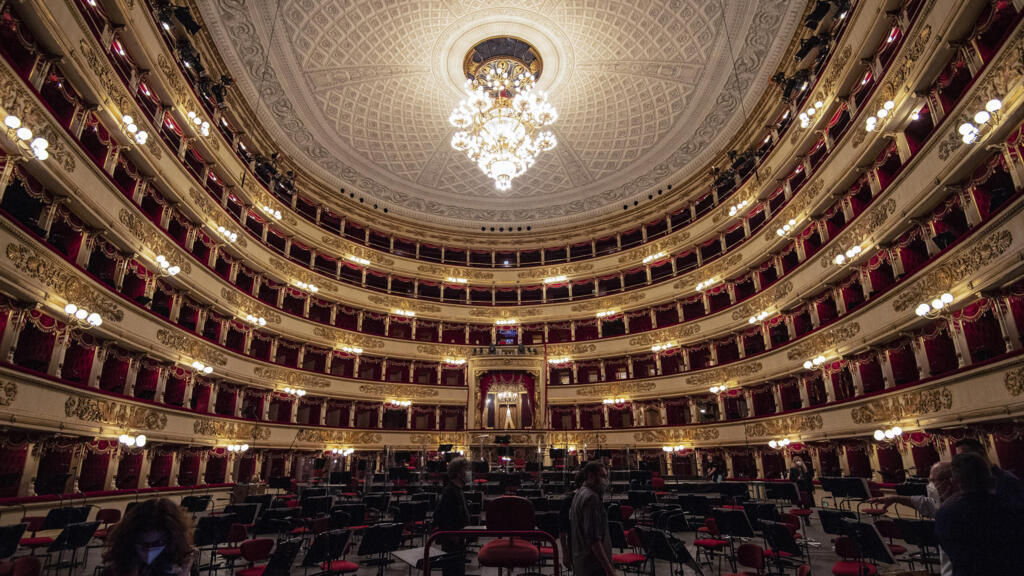 An audience of 500 people was able to attend a concert on Monday in the legendary Italian theater of La Scala, reopened after six months of restrictions linked to the pandemic.

Finally back at La Scala in Milan, the public on Monday May 10 gave a triumphant welcome to the concert conducted by its musical director Riccardo Chailly and the young soprano Lise Davidsen, which made the hall of the legendary Italian theater vibrate after six months of silence due to coronavirus.

The musicians and performers were greeted with heavy applause, many “bravo!” and “fantastic!” flew from the balconies where an audience was confined to 500 people, but enthusiastic.

“It’s a huge emotion to be able to breathe again the atmosphere that only the public can give us, I hope it’s a new beginning and that we will not stop after these sad months of silence”, confided, smiling, Laura Marzadori, first violin.

In order to respect the standards of distancing, the orchestra took place in the parterre, under the gilding of the prestigious auditorium hall dominated by boxes draped in red velvet and known for its exceptional acoustics.

The symphonic concert began with the majestic “Patria oppressa” (oppressed homeland) of Macbeth by Giuseppe Verdi performed by the members of the Choir de la Scala, all masked and installed at a good distance from each other on a sober stage devoid of any decoration .

The Vienna Philharmonic Orchestra, under the baton of Riccardo Muti, will take up the torch on Tuesday, 75 years to the day after the historic concert by Arturo Toscanini celebrating the reopening of La Scala in 1946, rebuilt after the bombings during the war in 1943 .

“It’s a double rebirth: Toscanini opened La Scala after the war and we are bringing it back to life after the pandemic, there is the same will to survive”, enthused Stefano Cardo, bass clarinetist of the orchestra of la Scala since 2007.

Italy, which has paid a heavy price for the pandemic with more than 122,000 dead, reopened its theaters on April 26. La Scala was not spared by the virus, with a total of 144 cases of Covid identified, including 64 in the choir.

Pandemic obliges, the intermission has been canceled and the bars closed: no more champagne flutes and petits fours, replaced by hydroalcoholic gel at will.

Despite these restrictions, the sensations were strong: “We have all listened to recorded concerts from our armchairs, but it has nothing to do with the emotion of the live music, the quality and the beauty of the natural sound”, confesses Dominique Meyer, director of La Scala since mid-2020.

The concert, loaded with symbols, ended with the famous slave choir of Verdi’s Nabucco with its “Va’pensiero”, an ode to freedom mixing beauty and sadness already sung during Toscanini’s concert in 1946, which gave place to a very applauded “bis”.

Rising star, the Norwegian soprano Lise Davidsen, 34, made her debut at La Scala, delivering a moving interpretation of the arias of Tannhäuser by Wagner, Ariadne à Naxos by Richard Strauss or the Queen of Spades by Tchaikovsky.

“La Scala has always been a symbol for the Milanese and for Italy, it is the second Italian brand in terms of notoriety, behind Ferrari”, notes Dominique Meyer. And “it is paradoxically La Scala which gives the signal to restart an entire country, while at the beginning of the health crisis we heard that culture was not an essential activity”, forcing the theaters to long shutdowns.

Terraces, cinemas, shops ... The details of a gradual deconfinement

the Covid-19 vaccination campaign will start on Monday

a series of fires in schools, revealing the inadequate school infrastructure

Independence of Gabon: 60 years later, a look back at the history of the former French colony