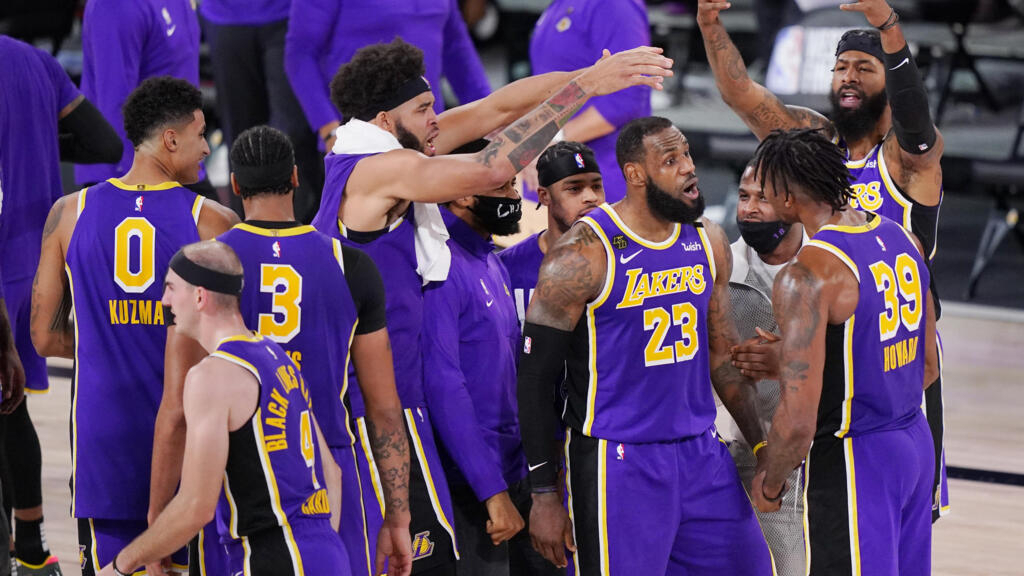 A champion’s performance: LeBron James, author of a huge triple-double, allowed the Lakers to defeat Denver (117-107) on Saturday to qualify for the thirty-second NBA Finals in their history, the first in ten years.

This is a first in ten years. After a champion’s performance, LeBron James allowed the Lakers to defeat Denver (117-107) and advance to the final of the NBA, after a huge triple-double on Saturday September 26th. This will be the 32nd final for the Los Angeles team.

In 2010, it is Kobe bryant which brought L.A. its sixteenth league title, its fifth personal. A very particular karma accompanies this new purple and gold generation, since the death of the idol on January 26 in a helicopter crash with his 13-year-old daughter Gianna and seven other people.

Since then, James and his teammates have vowed to bring the Lakers back to the top of the league to carry on the legacy of their glorious elder. An extra soul drawing on the famous “Mamba mentality” which animated Bryant, made of an unwavering thirst for victory.

Los Angeles will try in the final to equal Boston’s record (17 titles). The representative of the Eastern Conference who will come forward will be, precisely, either the Celtics or Miami who play their sixth game on Sunday, September 27 (3-2 for the Heat).

“King james“has not yet completely put the crown on his head, but his performance (38 pts, 16 rebounds, 10 assists) full of talent, authority, envy, once again places him above competition.

Until the end, at 35, he was the strong man of the Californian team in this fifth game, scoring 16 points in the last quarter, including nine in a row having definitively repelled the Nuggets. These had just erased 16 points behind.

His triple-double is 27e in the play-offs, three units behind the record of another former “Laker-Legend”, Magic Johnson.

“Do not tell me that LeBron James is not the MVP of this league after such a performance that takes the Lakers to the final!”, Has also tweeted the illustrious leader, reviving the debate on the trophy best player of the season recently awarded to Giannis Antetokounmpo, following a vote that upset LBJ.

Whatever, sitting on the floor in the middle of party favors celebrating his first title of Western Conference champion, cap screwed on his head, dark and determined look, he has clearly shown that he does not intend to stop there. “You have to take advantage of it, only two teams qualify for the final each year. But we have a bigger goal,” he said.

Under his leadership, the Lakers have had an impressive run in these unprecedented, contested play-offs in the Disney World bubble safe from the coronavirus, since they conceded only three defeats in three series.

Denver is on date

Before dismissing Denver, they had blocked the road, also in five games, Portland (4-1) and its star Damian Lillard, as well as that of Houston (4-1) and James Harden, best scorer of the season .

And unlike Utah Jazz and their rivals “angelenos” the Clippers, who had been brought up by the irresistible “comeback boys” of Denver after being down 3-1, the Lakers, them, did not crack in this same favorable position to end the series with authority.

Having finished first in the regular season in the West, they thus assumed their status as favorites throughout the play-offs, also carried by the significant contribution of Anthony Davis, recruited in the offseason.

The latter showed on this series, in the important moments, that he was more than a lieutenant for James, but a real offensive leader, still evidenced by his 27 points in this match. “It feels good to reach the final. We’ve been through a lot this year,” said the winger, adding that “the job is not done”.

For the Nuggets, bloodless of efforts for a month by accumulating knockout matches, where the Lakers have been able to save, the great adventure stops there, but it will have been superb.

Jamal Murray (19 pts) and Nikola Jokic (20 pts) gave everything, only they lacked fuel to be able to send Denver to the final. But they have taken a date.

the Beoplay A1 compact bluetooth speaker is 180 euros