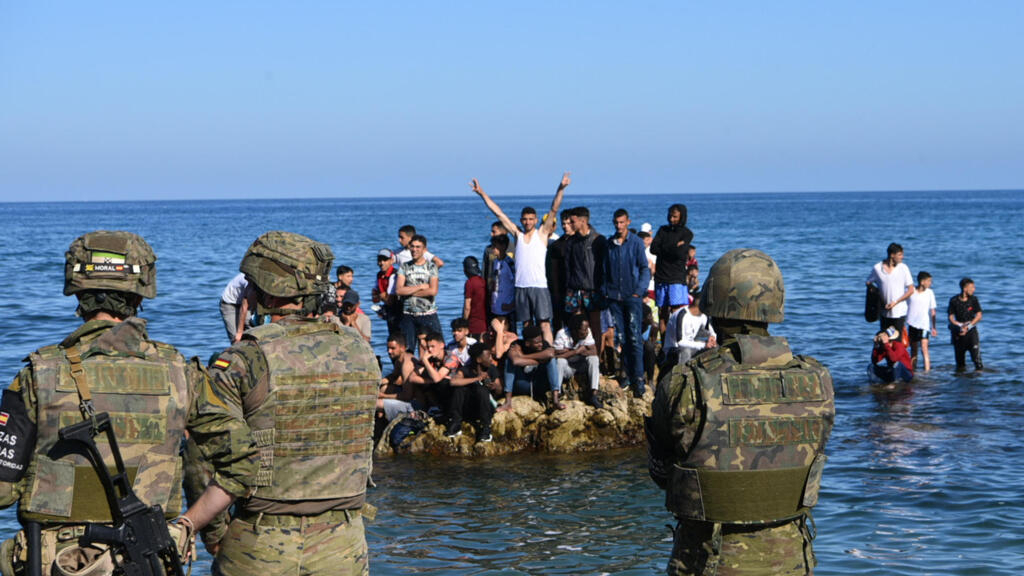 The sudden arrival of thousands of migrants from Morocco to Ceuta and Melilla comes against the backdrop of a major diplomatic crisis between the two countries. Spain summoned the Moroccan ambassador to Madrid on Tuesday.

The spanish government slap your fist on the table. Madrid summoned, Tuesday, May 19, the Moroccan ambassador to express his “dissatisfaction” with the arrival of nearly 8,000 migrants in Ceuta since Monday, from Morocco.

“I reminded him that border control has been and must remain the shared responsibility of Spain and Morocco,” said Spanish Foreign Minister Arancha Gonzalez Laya. In Rabat, the Moroccan Foreign Ministry announced the immediate recall “for consultation” of its ambassador.

Faced with the gravity of the situation, the Spanish Prime Minister, the socialist Pedro Sanchez, arrived Tuesday afternoon in Ceuta, where he was greeted by boos from a few dozen residents, according to images posted online by the newspaper local. He then had to go to Melilla, the other Spanish enclave located on the Mediterranean coast of Morocco.

“We will restore order in [la] city ​​and to our borders as quickly as possible “, he had declared earlier in a brief televised address from Madrid, describing the sudden arrival of these thousands of migrants as” a serious crisis for Spain and for Europe “.

The European Union calls on Morocco to act

Brussels expressed its solidarity to Spain and called on Morocco, through the voice of European Commissioner Ylva Johansson, to prevent “irregular departures” from its territory.

“Europe will not be intimidated by anyone,” added Margaritis Schinas, Vice-President of the European Commission in support of Spain, on Wednesday morning. He also said, about Morocco, that Europe would “not be a victim of these tactics”.

Nearly 4,000 migrants have been returned to Morocco, according to figures released Tuesday by the Spanish Ministry of the Interior, which also announced the sending of new reinforcements of the police on the spot.

Silence on the Moroccan side

This migratory crisis, unprecedented for Spain, of which Morocco is a key ally in the fight against illegal immigration, comes at a time when diplomatic relations between the two countries have deteriorated since the reception, at the end of April, by the Spain of the leader of the Saharawi separatists of the Polisario Front, Brahim Ghali, to be treated for Covid-19.

According to Isaias Barreñada, professor of international relations at the Complutense University of Madrid, this influx of migrants is “no accident” and “a strong message” from Rabat, because thousands of people “do not enter. so spontaneously “in Ceuta.

Morocco had summoned the Spanish ambassador to Rabat at the end of April to tell him of its “exasperation” after the hospitalization of the leader of the Polisario, a movement supported by Algeria which claims the independence of Western Sahara, a former Spanish colony that Morocco considers as an integral part of its territory.

If in Rabat, the highest authorities have remained silent since Monday, the central director of the judicial police, Mohamed Dkhissi, said Sunday on Moroccan public television 2M that Spain was “losing” in this quarrel and stressed that Morocco , “which is a regional power (…) is not the servant of any country”.

Syrian presidential election to be held on May 26

who are the jihadists who terrorize the north of the country?