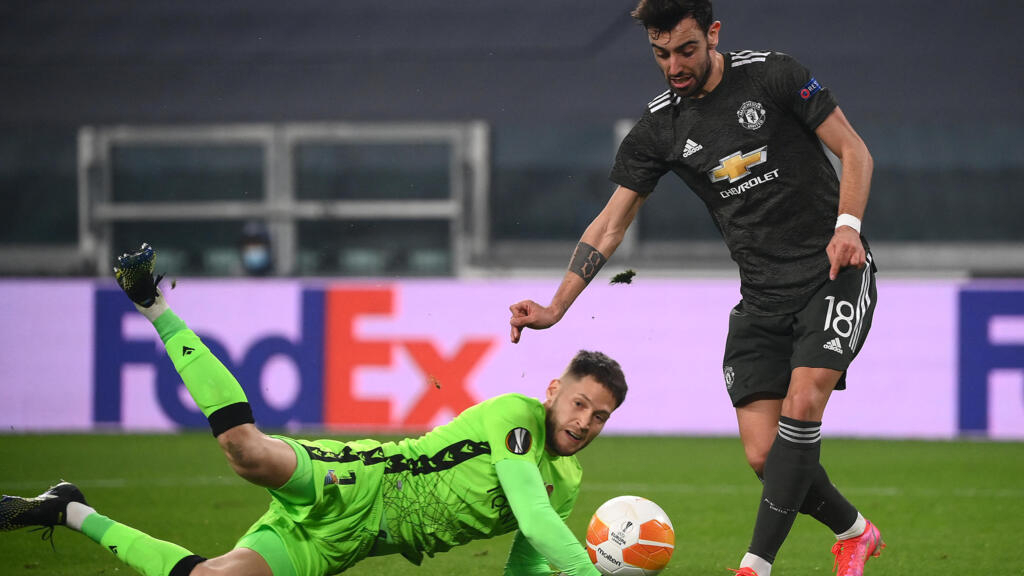 The favorites held their rank on Thursday in the Europa League. Manchester United, Tottenham and AS Roma won their round of 16 first leg. AC Milan, Leicester and Arsenal have drawn draws against Belgrade, Prague and Benfica. The only surprise of the evening, the victory of Granada against NapoliK.

Quiet evening for the big European cars in Europa League. Manchester United took a serious option on qualifying by correcting Real Sociedad 4-0 on Thursday February 18 in 16e of final go. Just like AS Roma and Tottentham, winners of Sporting Braga and Wolfsberg respectively.

Bruno Fernades opened the scoring on a misunderstanding of the Basque defense (27e), then doubled the lead in the second period on a well-brushed ball transmitted by Marcus Rashford (57e), before the goals of Marcus Rashford (65e) and Daniel James (90e) to seal this recital.

Although this game was played behind closed doors on neutral ground (at Juventus Stadium in Turin) due to health restrictions in Spain, these three goals allow the Mancunians to return to England with the advantage of away goals. … and allow them to already have an 8 footes final before the second leg on February 25.

Like Manchester United, and for the same reasons related to Covid-19, Tottenham played a relocated match in Budapest, against the Austrians of Wolfsberg. With an almost similar score (4-1) thanks to goals from Son (13e), Gareth Bale (28e), Lucas Moura (34e) and Carlos Vinicius (88e).

On the Italian side, AS Roma, currently 3e of Serie A, won 2-0 at Sporting Braga, Portugal.

But in the duel between former C1 winners, AC Milan led 1-0 then 2-1 against the Red Star in Belgrade, before being caught 2-2 at the last minute of stoppage time.

Meanwhile, during a crazy first part of the evening (35 goals in 9 matches), Leicester, 3e Premier League, was content with a goalless draw in Prague against Slavia, but Olympiakos was talking powder (4-2) against PSV Eindhoven.

Another completely unbridled match allowed the Young Boys of Bern to beat Bayer Leverkusen (4-3) while, much further east of Europe, Dynamo Zagreb won in Krasnodar (3-2) but will still have to be very vigilant in the second leg.

Arsenal obtained an advantageous draw for the qualification against Benfica Lisbon (1-1). The Gunners were however led after a penalty converted by the Portuguese international Pizzi (55th), who became the top scorer in this edition of the C3 with seven goals, but quickly reacted by equalizing on a volley from Saka (57th) .

This meeting was played without an audience and on neutral ground, the Olympic Stadium in Rome, due to health restrictions in Portugal linked to Covid-19. Arsenal’s achievement is still counted as an away goal. A precious advantage for Londoners before the return match on February 25, which will be played this time in Athens, again for health reasons.

The surprise came from Granada, 8th in La Liga, who beat Italians Napoli (2-0) and prepared well for the return match at the Diego Armando Maradona Stadium, next week.

Meanwhile, in Salzburg, the “yellow submarine”, official nickname of Villareal, 6th in La Liga, also won 2-0, as did the Ukrainians of Shakhtar Donetsk, semi-finalists last year, among the Israelis. of Maccabi Tel-Aviv.

Between the Belgians in Antwerp and the Rangers in Glasgow, the suspense was total and the twists and turns many, until the victory of the Scots at the end of the suspense (4-3), thanks in particular to two penalties from Barisic.

As for the Norwegians of Molde, they were led 3-1 by the Germans from Hoffenheim then ended up equalizing (3-3).

At least 23 dead in hospital fire for Covid-19 patients

in Nouakchott, three whole days without tap water in a heatwave

thousands of angry protesters on the second anniversary of the uprising