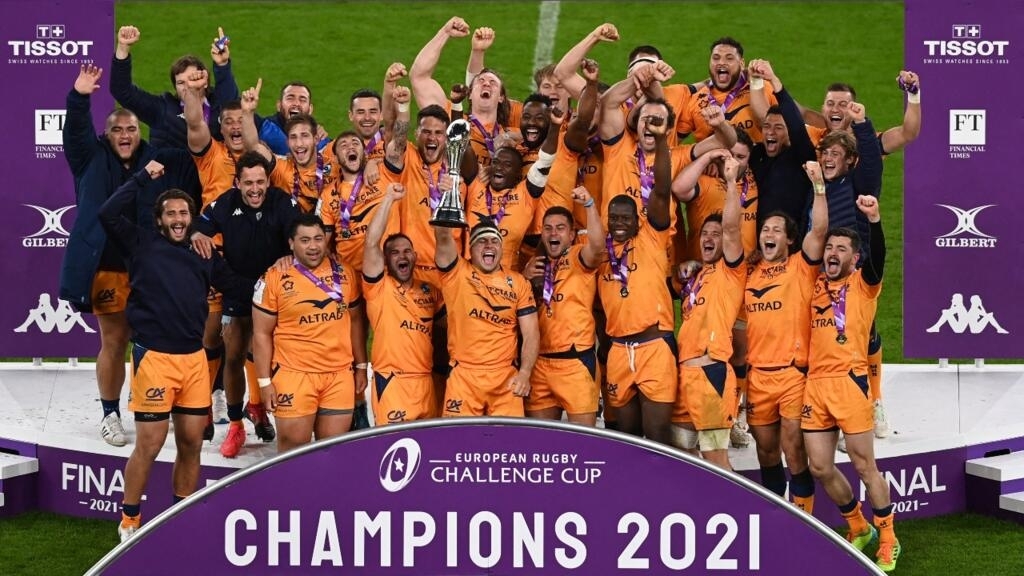 The French club Montpellier won for the second time the European Challenge, the “small” Continental Rugby Cup, by dominating the English Leicester by a small point (18-17), Friday at Twickenham in England.

Montpellier continues its recovery brilliantly: the Hérault club has revived its season by winning its second European Challenge, the “small” Continental Cup of rugby, thanks to a one-point success in the final ahead of the English Leicester, Friday May 21 at Twickenham.

Guilhem Guirado and his partners dampened the enthusiasm of some 10,000 English supporters, who chanted “Tigers, Tigers”, the nickname of the Leicester team, by winning the smallest gap (18-17) at the end suspense.

After the success of the MHR, the two European trophies will therefore go to France, since Toulouse and La Rochelle face each other on Saturday (5:45 pm) in the final of the “Champions Cup”.

The hexagonal clubs which take control of the two European competitions? It had only happened once, in 1997, thanks to the victories of Brive and Bourgoin-Jallieu.

But if the course of Toulouse and Rochelais is not a surprise, to imagine Montpellier winning a second European Challenge, after 2016, seemed unexpected a few months ago.

Montpellier, penultimate of the Top 14 in February

At the beginning of February, the club chaired by Mohed Altrad, big money maker of rugby, was still penultimate of Top 14. But the sporting director Philippe Saint-André has straightened the Languedoc ship well.

The former coach of the XV of France (2011-2015), who became a coach again in early January after the dismissal of Xavier Garbajosa, even transformed a dying team into a conquering squad.

It was not all easy and PSA initially had to concede five defeats in five matches after putting on the coach’s tracksuit.

But since the beginning of February, the Montpellier machine has started up again. It has thus conceded only two defeats in twelve matches, in all competitions. Friday, in the temple of the XV of the Rose, the Languedocians were however almost sealed by their indiscipline.

The nine penalties conceded in 45 minutes created a mess. It was above all the two yellow cards, inflicted on N.8 Alexandre Bécognée at the end of the first period and then on captain and hooker Guilhem Guirado at the start of the second, which offered ammunition to their opponents.

The Tigers took the opportunity to pick up the score (10-10) thanks to a test in strength from Harry Wells then to widen the gap with the South African N.8 Jasper Wiese in bulldozer mode. Each time, on balloons carried that the Montpellier residents had all the trouble in the world to control.

The team of Philippe Saint-André was not spoiled by fate either, with the exits, for concussion, of the flanker Fulgence Ouedraogo and of the center Arthur Vincent. Despite this, the Montpellier hung on and the South African center Johan Goosen – designated man of the match – gave back control to his team (18-17) of a solo try, after a smart inside pass from the back Anthony Bouthier, approaching the last twenty minutes.

A “match that was tough, bitter”

The people of Montpellier suffered. But they held up well in defense in the face of the assaults of the club to the ten crowns of champion of England which also sought to give relief to a disappointing season. Excluding the race for the title in “Premiership”, the “Tigers” ambitioned to renew the thread of their glorious European past, they who had achieved a double in the “Champions Cup” in 2001-2002. In vain.

“We win this match which was hard, harsh, Leicester is a good guy in front. But hey, what selflessness, what courage!”, Greeted Saint-André at the microphone of France 3.

Not yet saved in Top 14, Montpellier will have to put on the warming blue to ensure its maintenance and this from Tuesday. He will travel to Bordeaux-Bègles for a late match, which promises to be difficult. But with a lighter heart and a qualification for the “Champions Cup” 2021-2022 in hand.

Alesh: "I am inspired by the daily life of our Congolese life"

In Paris, a new museum of contemporary art welcomes the collection of François Pinault

“The return of Laurent Gbagbo could not be discreet”

“It is too early to judge the effect of the reconfinement”, according to Olivier Véran