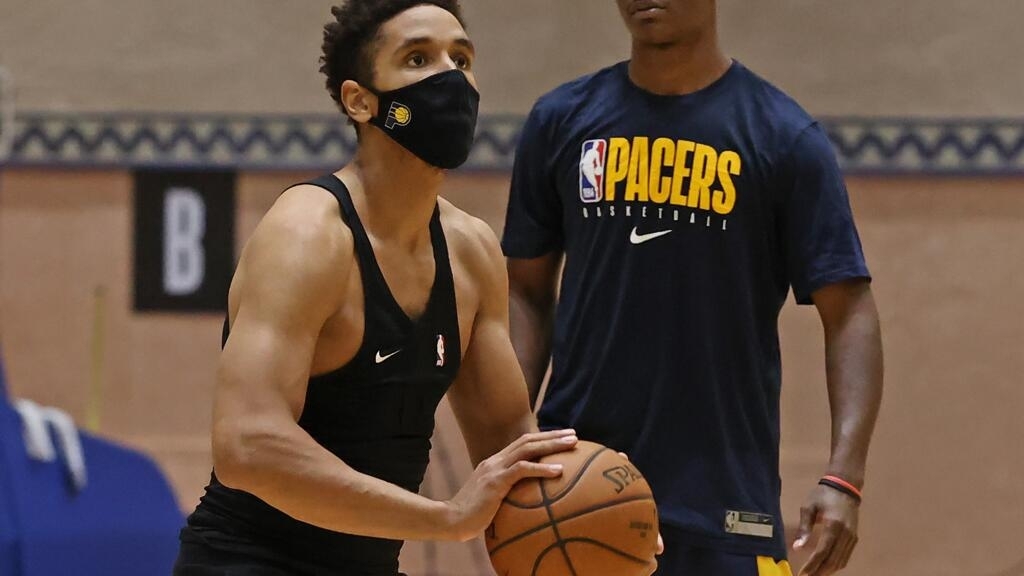 The stars of the North American Basketball Championship have been training for several days in a quarantine atmosphere at Disney World in Orlando. The 22 NBA clubs have made their home in Florida and will play behind closed doors for the rest of the season from July 30, against a backdrop of Covid-19 and commitment against police violence.

NBA season ceased on March 11 following the announcement of French player Rudy Gobert test positive for Covid-19. More than four months after this shutdown, it will resume on July 30 with a game between the Utah Jazz, the team of the tricolor pivot, and the New Orleans Pelicans.

As the virus continues to spread in the USA, the North American basketball league has deployed great means to financially save its championship without endangering its stars. Since the beginning of July, players from 22 clubs have arrived in Florida to participate in an ultra-secure training camp before playing the rest of the season behind closed doors. They settled in Disney World, in the city of Orlando: a real “bubble” supposed to protect them from Covid-19 and whose bill amounts to 150 million dollars.

Upon arrival, each player was screened in a specially designed quarantine area, even as Florida has become one of the main hotbeds of coronavirus in the country. They were then subjected to a new test 24 hours later to be authorized to access in particular the restaurants of the hotel. They must also wear a ring allowing their state of health to be known in real time with the taking of the pulse, temperature, respiratory rate and calculation of activity and sleep. This technology is believed to determine the likelihood of developing the Covid-19 even before having the slightest symptom.

A regulation of a hundred pages has thus been drafted, and woe to anyone who does not respect it. According to sports channel ESPN, Bruno Caboclo of the Houston Rockets left his room without permission and was given eight days of extra quarantine before he could return to training. Sacramento Kings interior Richaun Holmes also had to apologize on his Twitter account for going out of bounds to retrieve a food delivery.

Despite these very strict measures, this “bubble” setting did not elicit the support of all players. “I do not like the idea, I still do not have confidence,” said Joel Embiid, star of the Philadelphia 76ers. The Cameroonian center even considered not playing, but ultimately chose not to let his teammates down in their quest for an NBA title.

“I’m not a big fan of the idea. But then again, I’m going to do my job. I’m not going to let the city down. I’m going to represent my city, my family, my teammates – that’s what I’ve always done. ” #Sixershttps://t.co/v7pIJGfGIH pic.twitter.com/1OcTptsRJe

For his part, the star of the Milwaukee Bucks, Giannis Antetokounmpo, said he was ready to return to the court, although he explained that it was a hell of a challenge given the context: “You are going somewhere without your family for three, four months, and you haven’t played basketball for three and a half, four months, ”he said. The title will therefore go “to the one who wants it the most, who is the best mentally prepared for all this, for what is happening in Orlando”, according to the Greek player, who participates in the very good season of the Bucks, team having won the most matches during the regular season. At the head of the Eastern Conference (American clubs are divided within two large areas called East and West) just before the break related to the coronavirus, with a record of 53 wins for just 12 losses, the Milwaukee team is among the favorites to reach the title.

The French player Evan Fournier also agreed with the general opinion and found his teammates from Orlando Magic. As he told AFP, the French international, however, thinks that the winner of the season will benefit from a coronation at a discount: “Things are a little distorted. Ultimately, for future champions, this is no ‘is not fair. They will have dismantled themselves to win and they will be less respected than a true champion after a full season. So, of course, this team will be a very good team, but they will not have had the normal course that leads to an NBA title. “

Arrived on July 7 in the grounds of Disney World, Evan Fournier makes his subscribers on Twitter live his daily life in the bubble. After recognizing that the food was better than he had imagined, he explained that this training camp reminded him of his preparations with the France team, before telling with humor that there was in his hotel than a pool for six teams.

In our hotel we are 6 equipped for a swimming pool. This is a sausage part of the mess.

A sports recovery under the background of racial protest

Many basketball players are also concerned about the political situation in the United States and the Black Lives Matter movement. After weeks of demonstrations in response to the death of Georges Floyd, an African-American who died during his arrest by the police, several players want to continue the mobilization. The pivot of the Lakers Dwight Howard even hesitated for a time to return to the prosecution for fear of moving away from the fight against police violence. “Yes, I will join my team in Orlando. But besides that, we will do great things,” said the 34-year-old who decided to donate his entire salary for the takeover, around $ 700,000, to his Breathe Again association for social justice. “I have to. I have a contractual commitment to the Lakers, my teammates and the fans. However, I also have a commitment to my family and my community,” the teammate added. of superstar Lebron James.

Some of his comrades will wear messages on the back of their jerseys when the NBA resumes, as the league has allowed them to do among thirty slogans, such as “I Can’t Breathe” (“I can’t breathe” ), Justice, Peace, Equality, Freedom or Anti-Racist.

But several players have expressed frustration with this list, such as LeBron James, who hinted that he would have liked to have a say in these messages and chose to keep his name on his jersey, or Evan Fournier, who criticized establishing a list, but chose to carry the word “Justice”.

The NBA Players Association (NBPA) will therefore partner with player Russell Westbrook’s clothing brand to design t-shirts featuring social justice messages, some of which have not been approved by the league for recovery, The Athletic outlet reported on Sunday.

As this return to competition approaches, some players are missing. Milwaukee Bucks point guard Eric Bledsoe announced on Friday that he could not join his team in the “Orlando bubble” because he contracted the coronavirus. “I am asymptomatic and I feel good,” said the 30-year-old, however. “When I am in order with the protocols put in place by the NBA, I look forward to joining my teammates in Orlando,” added Bledsoe. Before him, other NBA players have also tested positive, including Russel Westbrook (Houston), Kevin Durant (Brooklyn), Marcus Smart (Boston) and Harrison Barnes (Sacramento).

NBA boss Adam Silver said in an interview with Time that the season would be halted if coronavirus cases increased in Orlando, while ensuring that resuming in the Disney World “bubble” remained there ‘safest’ option.

If all goes well, as of July 30, the schedule has up to seven matches per day, with kickoffs between 12 p.m. and 9 p.m. on three different pitches. Twenty-two teams are affected by this end of the championship: to the first eight of each conference (Milwaukee, Toronto, Boston, Miami, Indiana, Philadelphia, Brooklyn, Orlando in the East; Lakers, Clippers, Denver, Utah, Oklahoma City, Houston, Dallas, Memphis in the West) are added six clubs six games or less from the 8e place in each conference (New Orleans, Phoenix, Portland, Sacramento, San Antonio in the West, and Washington in the East).

Each team will play eight games in the regular season. After which, the table of the play-offs will be almost known, since the first seven of each conference will be directly qualified. The 8th and last sesame will, in the East as in the West, be the subject of a possible dam. The play-offs will then take place in a classic way to the best of seven matches, for a final crowning on October 13 at the latest.