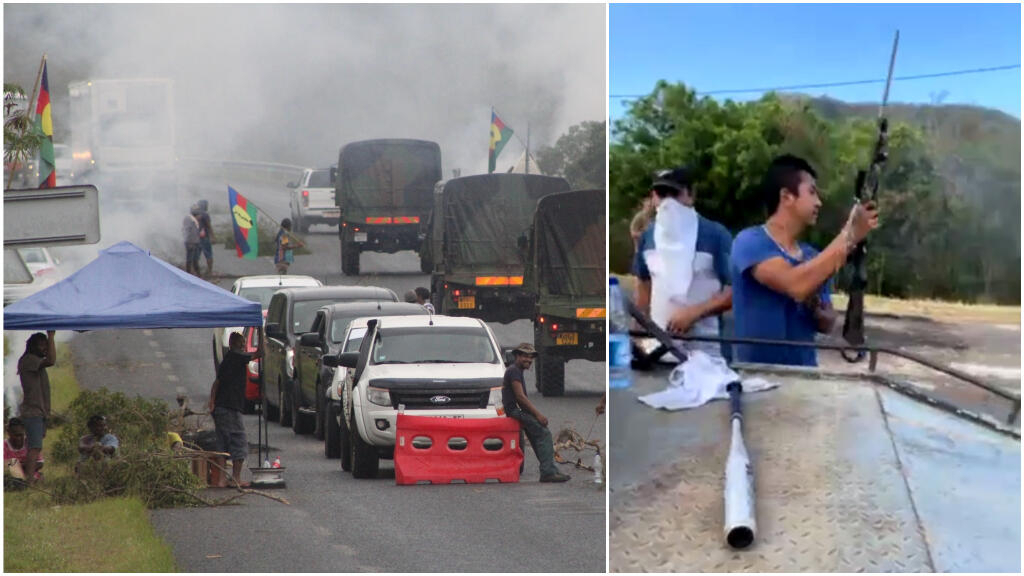 Since December 7, a large protest movement has spread in New Caledonia and has, over the days, taken an increasingly violent turn. Several videos thus attest to fires, roadblocks, but above all to the presence of civilians armed with guns. If the tensions are concentrated around the proposed buyout of a nickel factory, they mainly echo, according to our Observer, the deep divisions of New Caledonian society.

In several amateur videos shared the week of December 7 on social networks, we see civilians armed with guns facing protesters who have erected roadblocks. The latter mobilized around a slogan “southern plant = country plant”, in reference to the nickel plant located south of the island of Grande Terre, majority owned by the Brazilian company Vale.

These demonstrators, mainly from the indigenous Kanak people, are protesting against a plan to buy out by the Trafigura company, an operation which they believe “sells off” a strategic local resource. Several representative bodies of this community, for example the Kanak Socialist National Liberation Front (FLNKS), want the site to be nationalized in the name of a political program claiming to be socialist. This program is anchored more broadly in a fight for the independence of this former French colony which has become an overseas territory with a unique status.

An example of a filter dam in Nepoui.

To protest against this takeover, the demonstrators erected numerous roadblocks in Grande Terre, complete or filtering, and distributed leaflets. Some protesters also attacked a gas station in the town of Mont Dore on December 9 by setting it on fire. The next day, a group tried to break into the premises of the factory, a site that is nevertheless classified as Seveso and therefore subject to possible serious accidents. The gendarmes present on site had to use their weapons to repel them.

“We have decided to set up self-defense groups”

Jérôme P. (pseudonym), works in Nouméa and lives in Mont Dore, a town located 15 kilometers from the capital. This loyalist wants New Caledonia to be maintained under French bosom and is fed up with the demonstrators. He wished to remain anonymous for fear of professional repercussions.

Dams are usual for us, as soon as there is a political mobilization, especially in Mont Dore. Each time, nearly 12,000 people find themselves cut off from the rest of the island.

But this time the violence is much more important: we, the individuals, have suffered caillassages, a gas station was set on fire, a nearby business looted. The people who do this are not very well organized, but there are a lot of them.

The Caledonian participatory media Radio Cocotier relayed the testimony of a woman who claims to have been attacked by demonstrators in Noumea on Monday, December 7. That day, the protesters clashed with the police, who arrested 47 people. The authorities announced that 17 police and gendarmes were injured.

In reaction, we decided to set up self-defense groups, a sort of private militia. The idea is to defend our businesses, our freedom to move. Some of us are armed. The climate is really very tense, and brings back the specter of the 1980s [période d’affrontements entre indépendantistes, forces de l’ordre et caldoches, c’est à dire néo-calédoniens d’origine européenne, NDLR].

“The country is on the brink of civil war”

#New Caledonia
atmosphere of civil war for 3 days following the sale of a nickel extraction plant to the Prony resource consortium.
The #Kanaks natives are against and have taken actions / here armed militias want to put down the revolt pic.twitter.com/KloCt6CjEj

In this video, a man equips himself with a rifle during a counter-demonstration in Païta, a few kilometers north of Nouméa. These images were massively relayed by Kanak activists, who denounce an escalation of tensions.

On December 9, the Caledonian authorities issued a strict ban on carrying weapons until December 13.

On the Kanak side, the finding is just as alarmist. “The country is on the brink of civil war,” said with the newspaper Liberation Raphaël Mapou, clan chief, doctor of public law and spokesperson for the Indigenous Customary Negotiating Body (Ican). “We will go to the end of the logic. With us, control of the soil cannot be negotiated. Only the State can stop all this by finding another buyer for the factory. Trafigura will not set up here,” he said. – he hammered.

For me, the violence of this week is widening the divisions and the deep differences that exist between the Kanaks and the rest of the population. The former attach particular importance to the notion of collective, inherited from their functioning in clans. We can therefore see why socialist ideology, the idea of ​​nationalizing resources, speaks to them. And this natural resource is all the more important when we know their independence project. If they want to create a state, it must be able to control its resources.

On the other hand, we have mainly Europeans who are more individualistic, centered on their family units, who want to develop the economy and perhaps do not have as many problems with the notion of capitalism.

In October 2020, a self-determination referendum saw the “no” to independence prevail at 53%. This poll is the second in a series of three referendums provided for by the Nouméa agreements, the next one to be held in 2022 and the previous one being held in 2018. If one of these polls sees the “yes” win, New Caledonia will be able to begin a process of access to independence.