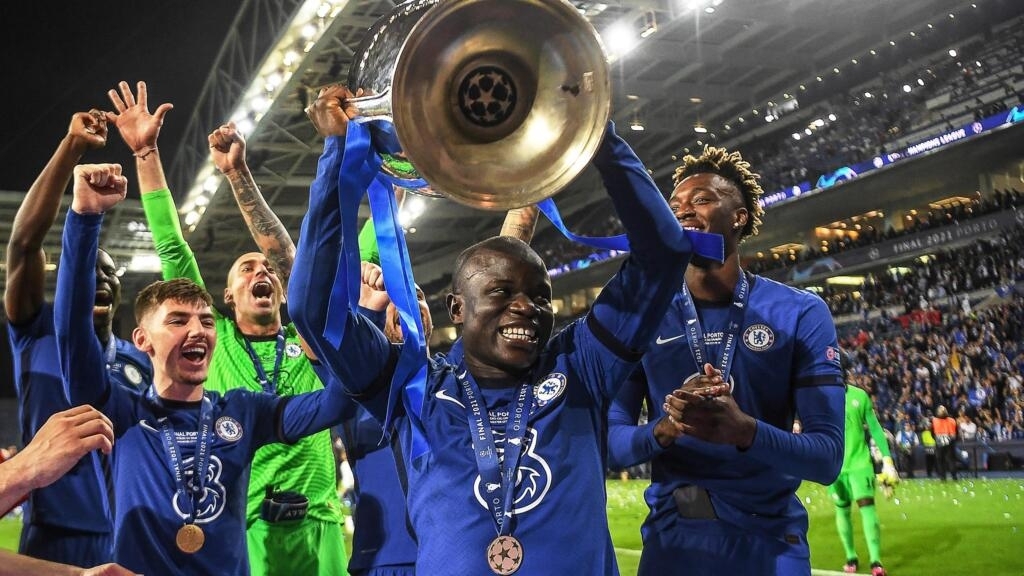 Uncompromising in the midfield, N’Golo Kanté was elected man of the match in the Champions League final won on Saturday by Chelsea against Manchester City.

Omnipresent and flawless, the inexhaustible French international midfielder N’Golo Kanté signed a new recital on Saturday, May 29 in Porto to offer in Chelsea the Champions League trophy, one of the few that was still missing from its large list of achievements.

A few weeks away from the Euro (June 11 – July 11) with the France team, Kanté finished a first marathon: cutting edge in the middle of the field, often precious during the offensive climbs of the “Blues”, the pocket midfielder (1.68 m) was one of the base men of this long awaited coronation, the second in Chelsea history, and the Londoners’ superb season.

As usual, the 2018 world champion, “darling” of the French very appreciated for his simplicity and shyness, was everywhere on the ground of the Dragon stadium on Saturday evening. In the end, he was voted “man of the match”.

At the break, he was already the player who had run the most, with 6.16 kilometers swallowed and 24 high-intensity races accumulated in the first period.

Returning from the locker room, he returned to the lawn with increased desire and remarkable defensive action on a threatening free kick from Mancuniens, to give the rhythm to his teammates.

With the French international, the so impermeable curtain of Thomas Tuchel’s men did not have to worry about possible infiltration after the exit on injury of Thiago Silva (affected in the adductors half an hour into the game), both Kanté has increased the number of balls stuck in midfield.

The perfect illustration was his incisive tackle on Kevin de Bruyne in the 52nd as he approached the area of ​​Edouard Mendy, or this hot ball tackled in front of his area in the feet of Riyad Mahrez in stoppage time, his great specialty.

A contribution that is both offensive and defensive

Even if he did not participate in the construction of the goal of Kai Havertz (42nd), Kanté still split some offensive actions that could have been crucial: the small midfielder notably won in the air at the far post, between two defenders “citizens”, at the start of the match (17th), but he did not frame his head.

A few minutes earlier (12th), he had been served in the box by Timo Werner, but had missed his control. And just before the break (37th), Kanté scratched a ball in his own half of the field to afford a crazy ride into the opponent’s area, before shifting Havertz to his right, who lost control of the ball.

Kanté thus ends the season without having found the net once with Chelsea … but with an indispensable sympathy and presence.

“It’s incredible. It’s the result of a lot of effort. That (his title of man of the match, editor’s note), it’s secondary. The main thing is the work of a whole group, it’s is pride, joy, “Kanté said on RMC Sport on Saturday night.

“this guy is amazing”

Injured to an adductor muscle in mid-May during the penultimate day of the English championship, eleven days ago, Kanté did not participate in the defeat against Aston Villa (2-1) on Sunday in the league, but he did well held his rank on Saturday night for this unmissable poster.

It was one of the rare absences of the player born in the peaceful city of Rueil-Malmaison – he missed 10 matches this season, including only 4 due to injury -, in the Geraniums district, and who gradually climbed all of them. the echelons of the continent to afford this first European coronation.

“He’s huge. I don’t know what to say, this guy is incredible. He runs everywhere, he makes differences, he creates gaps … With him, we feel like 12 on the pitch” , praised Olivier Giroud on RMC Sport.

Flamboyant when the level rises, Kanté had already been brilliant in the semifinals, twice elected man of the match in the first leg and in the return against Real Madrid.

“‘NG’ is used to a very high level, he has had some physical glitches too. He does not spare himself, he is not a robot either. Even when his team’s result is almost certain, it does not. does not prevent him in the last minutes from making the same efforts. It is + NG +, it is like that, I am not going to change it “, confided Didier Deschamps in March.

A new lesson of envy and football which should give a smile to the coach of the Blues a few days before the opening of the Euro: Kanté will continue to multiply to help the Blues, after the “Blues”, to fetch the title to the Euro.

A "North Korea at the heart of Europe", Belarusians in exile denounce repression

In Algeria, the anti-covid-19 vaccination campaign begins in Blida