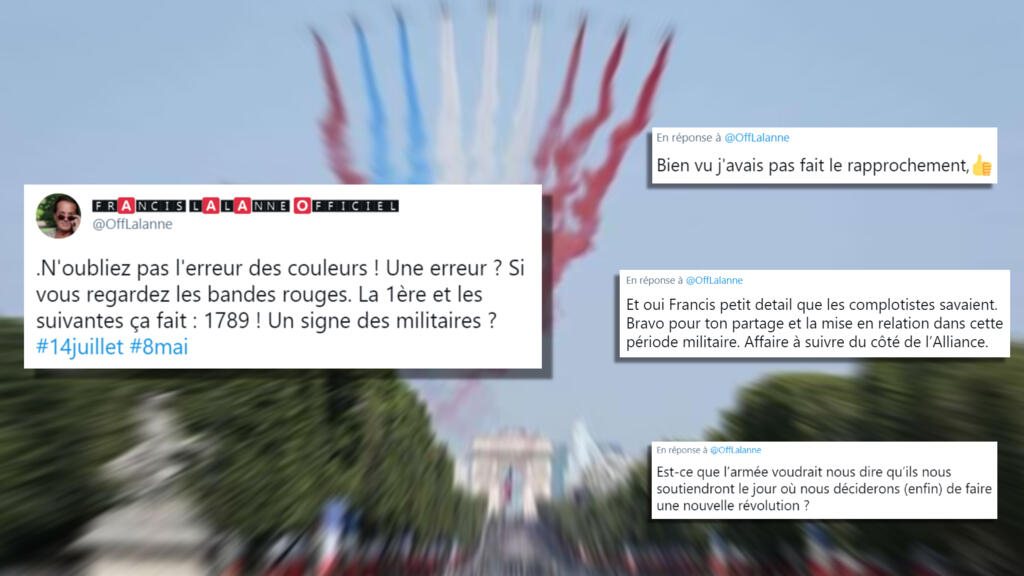 The French singer Francis Lalanne suggested that the Patrouille de France would have, during its parade in the Parisian sky, passed a revolutionary message. It’s actually based on a photo dating back to July 14, 2018 showing an error for which the Air Force apologized.

The celebrations of May 8, the anniversary of the surrender of Nazi Germany in 1945, were marked this year in France by the controversy surrounding the two “military forums” published in the weekly Valeurs contemporaine, mid-April and at the beginning of May, worrying in particular about the “disintegration” of France and evoking a risk of “civil war”. It is against this background that singer Francis Lalanne posted the following tweet on May 8, which includes an image:


“Do not forget the error of the colors! An error? (…) A sign of the military?”, He asks. The focus, he says, is on the order in which the red powder jets are arranged: first, seventh, eighth and ninth positions. “It’s been 1789!” So, should we really see in it a reference to the French Revolution, and through it a call to rebellion launched by the French army?

No military parade took place on May 8, 2021 in Paris. And Francis Lalanne refers in his tweet to two dates, in the form of hashtags: July 14 and May 8. To be able to date the photo used by the singer, it is therefore necessary to resort to a reverse image search (see here how to proceed). Thanks to the other occurrences found (in particular this one, which appears in the first results), we can see that it was taken during the July 14 celebrations in 2018.

The red color released by the first Patrouille de France plane that day was not a deliberate choice, but a mistake, as the smoke bombs had to faithfully reproduce the French “blue-white-red” flag. According to France Info, the error arose from a misfiring when loading the powders. The Air Force and Patrouille de France Twitter accounts quickly published apology messages.

#July 14th The flight over the Patrouille de France is at the heart of the questions. This is indeed a mistake we deeply regret and apologize for.
But we hope that tomorrow, blue will be perfect! 🇫🇷 pic.twitter.com/fePgVT9Ls8

This is an unforgivable mistake … Our sincere apologies to all of our fellow citizens and brothers in arms. Our mission continues, we will make it more united than ever, with the heart and the tenacity to represent you even more worthily. #Patrouille de France pic.twitter.com/bpnv3cifjg


In general, before relying on a publication consulted on social networks, it is necessary to verify the reliability and the positioning of its author. In this case, Francis Lalanne has become in recent months more and more radical in his positions, and frequently relays conspiratorial content around the Covid-19 pandemic.

On January 22, he published on the FranceSoir site, reputed to be a conspirator, a column comprising a chapter entitled “Call for the mobilization of the armed forces to come to the aid of the people in the reconquest of their sovereignty”. He invited the French military to overthrow President Emmanuel Macron. As a result he was the subject of a investigation for “provocation to the commission of attacks on the fundamental interests of the Nation”.

To restore his image, Erdogan poses as a defender of Islam against Macron